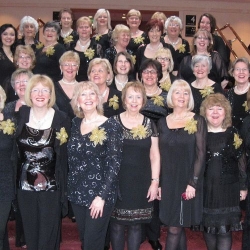 With Thanks to Linda Allan. 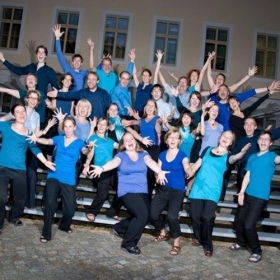 The lilting strains of “Harmonise the World” with its powerful musical message for today’s world, can be heard at the close of every gathering of the body of women singers called Sweet Adelines International.
Audience members in Deeside will be treated to an example of this international spirit this autumn, when the Jazz Group Conference-of-Swing from Dresden and Aberdeen Chorus of Sweet Adelines team up for two evenings of lively Jazz vocals and superb close harmony.

This all came about when Riki Gohrbrandt one of the German Jazz Group, found an outlet for her musical talent by singing with the Aberdeen Chorus in her spare time while working for a year as a Foreign Languages Assistant in Aberdeen.

She enjoyed the experience so much, and had become such firm friends with the singers, that she was determined to keep up her links with the Chorus and encourage her fellow singers in the Jazz Group to consider a trip to Scotland culminating in a joint concert with her musical friends from last year.

Several months and many reams of emails later, this plan has come to fruition.

The Aberdeen Chorus – fresh from their success at the Edinburgh Fringe and their Show in the Music Hall Aberdeen – is soon to play host to the group of 25 talented singers from Dresden, and provide accommodation with lots of sightseeing opportunities, culminating in two concerts in the Banchory area.

On Monday 3 October at 7:30pm the two groups will make music together in Peterculter Church.  Both groups are particularly excited not only about the chance to hear each other, but also the chance to perform together as one and demonstrate to audiences what is so near to all singers’ hearts in the lyrics of “Why we sing” with its echoes of “Harmonise the World”.

On Tuesday 4 October at 7:30pm, Riki will sing with her group Conference-of-Swing at the Woodend Barn Banchory. 4 Quartets from the Aberdeen Chorus, Vocal Zone, Shindig, Chimaera and Singularity are also excited about sharing the stage then and this promises to be an entertaining and very harmonious event.