Described as ‘Ronnie Barker’s Porridge meets Gene Wilder’s Stir Crazy’, former inmate James Crosbie relates a number of tales of what went on behind the walls of that grim granite fortress once the doors had clanged shut. David Innes reviews. 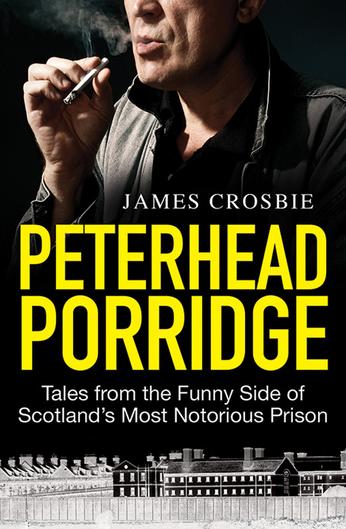 It’s quite apposite that it’s been published now, with, in recent weeks, the replacement prison in the Blue Toon having had its first riot.

Despite the new prison’s much-acclaimed state-of-the-art facilities, beyond the dreams of the old jail’s cons who populate Crosbie’s book, incarceration and loss of freedom must still be the frustrations that fuel the fire of insurrection.

Peterhead Porridge in many ways lifts the lid on the coping strategies developed by prisoners for whom release seems a far-off fantasy and whose biggest enemies are boredom and apathy.

Content to keep his head down and do his time with little fuss and only occasional ducking and diving, Crosbie cannot hide his admiration for those who use humour, very often of the cruellest kind, to relieve the drudgery and make even just a few minutes less mind-numbing.

So, we’re treated to a litany of background anecdotes on nicknames for fellow cons and their enemies the screws, and a succession of accounts of practical jokes, pranks and little victories against the system, all ways of beating the tedium.

In the hyper-macho world behind bars, one-upmanship is all. To lose face is to invite ridicule and among the best parts of Peterhead Porridge are the droll and amusing accounts of circumstances in which the thinkers hold sway over the boastful and aggressive.

There is cruelty too, but Crosbie has left out anything too harrowing as he learns to cope with his loss of freedom, even becoming a regular petitioner for the rights of his peers.

Even if some of the tales fall into the “you had to be there” (er, no thanks) category, there are belly-laugh moments throughout. The key to survival, in the absence of the key to the front door, seems to be to ensure that no weakness is displayed. The lag who let slip his fear of Peterhead’s fearsome seagulls is a hilarious example of the consequences and the recurring theme of a worthwhile series of tales.