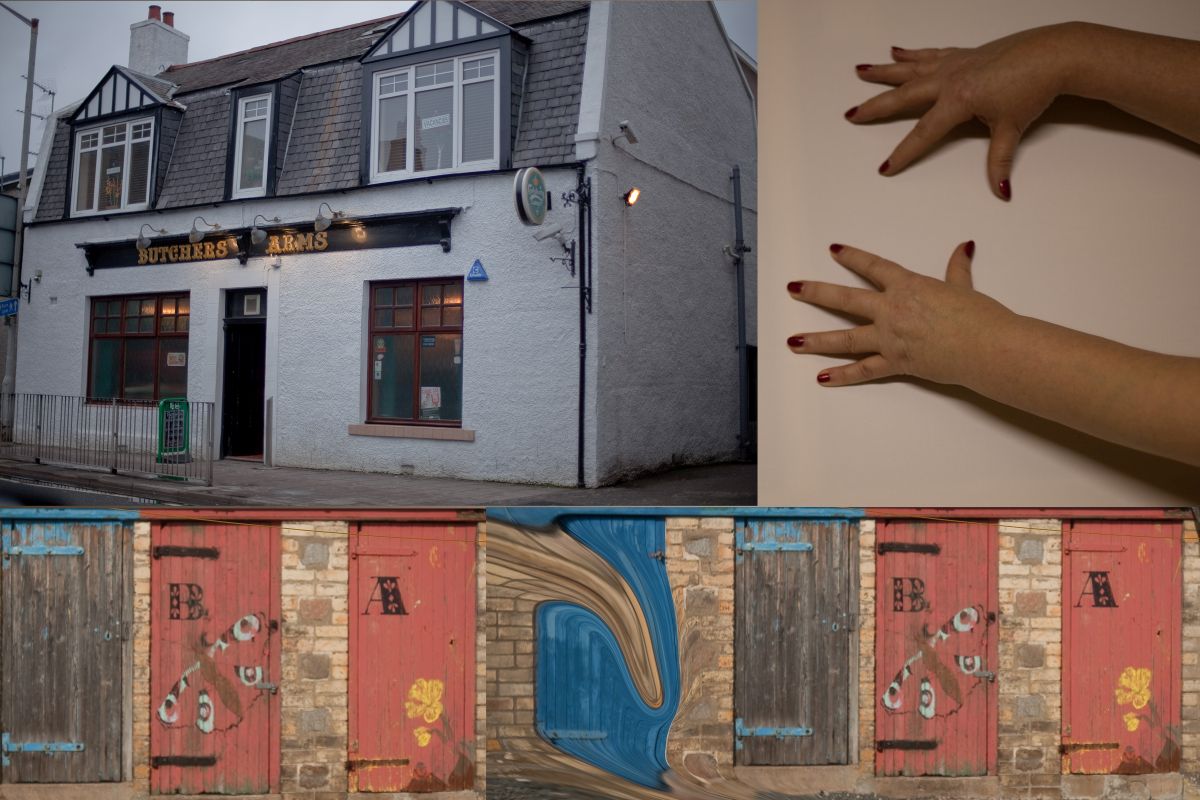 Nephrostomies work reasonably well but are, if truth be told, never particularly good. I mean, who in their right mind wants to wear a bag full of warm urine around their waist in summer. Not that anyone might know of course.
In the best possible taste, all is pretty well hidden apart from the drainage tube sticking out of one’s back.

In fact, the consultant, or at least one of them, cautioned that, although it all looks bleak – and I can tell you that this is true – no-one would really know that you are wearing one.

Really? I think not. Pissing, showering and anything to do with having sex are on the table as being difficult.

Having a shower involves a set routine.

First wash your hands. Then empty the urine bag. Ensure that a dry waist belt is available and then, and only then, take a shower. On emerging, dry off before changing belts. Make sure that you towel underneath the bag – otherwise you will need to suffer wet pants and worse. Above all, never sleep on your back and avoid turning in bed lest you put pressure on the bag. And, whenever it feels right, keep on with the hand-washing.

It’s a habit learned from the warnings on the wards – hospital acquired infections are rife. Hand-washing may defray death.

That’s an aside of course. Mainly, and apart from not being able to sleep on my back for the last 12 weeks, life is good.

The health-break has allowed a final edit to the new book. Taking it easy is fine if the head is allowed to engage after all.

The first post-surgical days were, to coin a phrase, a bit mad. An elder son had gifted a biography of a certain Bukowski as a birthday gift and I read it on the ward. Between bouts of surgically induced pain, the life and times of the man who variously wrote ‘Some people never go crazy, what truly horrible lives they must lead’ and ‘We are here to laugh at the odds and live our lives so well that Death will tremble to take us’ made complete sense. All down to the morphine perhaps.

So, there we have it. There is nothing like a good nephrostomy really.

At least, in the big picture, I have had a chance to do a final edit to the new book. I had, until now, no idea how much work a book involved. As I sit recovering aside a pile of other people’s books I and my cat Lucy take heart that in a few weeks or so, I will become famous. Or infamous, depending on your stance, as the author of the A-Z of Curious Aberdeenshire.

After all everyone should write a book at least once in their lifetime and I count myself one of the lucky few who have finally made it into print. Lucy is not so sure.

Muchalls, David Toulmin and the doomed Marquis of Montrose all get a good mention alongside Inkson McConnachie, Victoria’s ‘brown Brown’ and of course Jock o’ Bennachie.

“When John Reid wrote about his native North-east in his guise as David Toulmin,

he penned some memorable stories. His tale ‘Snowfire’ springs to mind. Hitler’s

lives in the siege of Leningrad. It is 1942 and he records that the folk of Buchan

cart.’ During a fierce blizzard, the farm’s water supply freezes, leaving the drinking

troughs empty. When the beasts are finally let onto the frozen river to drink from a

hole in the ice, a German bomber appears overhead and the aircraft gunner sprays

the ice with bullets, sending the thirst-crazed animals to a watery doom.

Toulmin is nowadays internationally recognised as one of Aberdeenshire’s finest

exponents of the short story. Born on a farm at Rathen in Aberdeenshire, he

the land for very small rewards. In odd moments he jotted down short stories,

character studies and bothy tales. Eventually, he had a few articles printed in local

newspapers. The first of his ten books was published when he was 59. His literary

output consisted mostly of short stories and reminiscences, his one novel, Blown

Seed, painting a vivid and harsh picture of farm life as an indentured labourer.”

Wish me luck is all I can say.

PS: the book is on pre-order at http://www.thehistorypress.co.uk/publication/the-a-z-of-curious-aberdeenshire/9780750983792/ 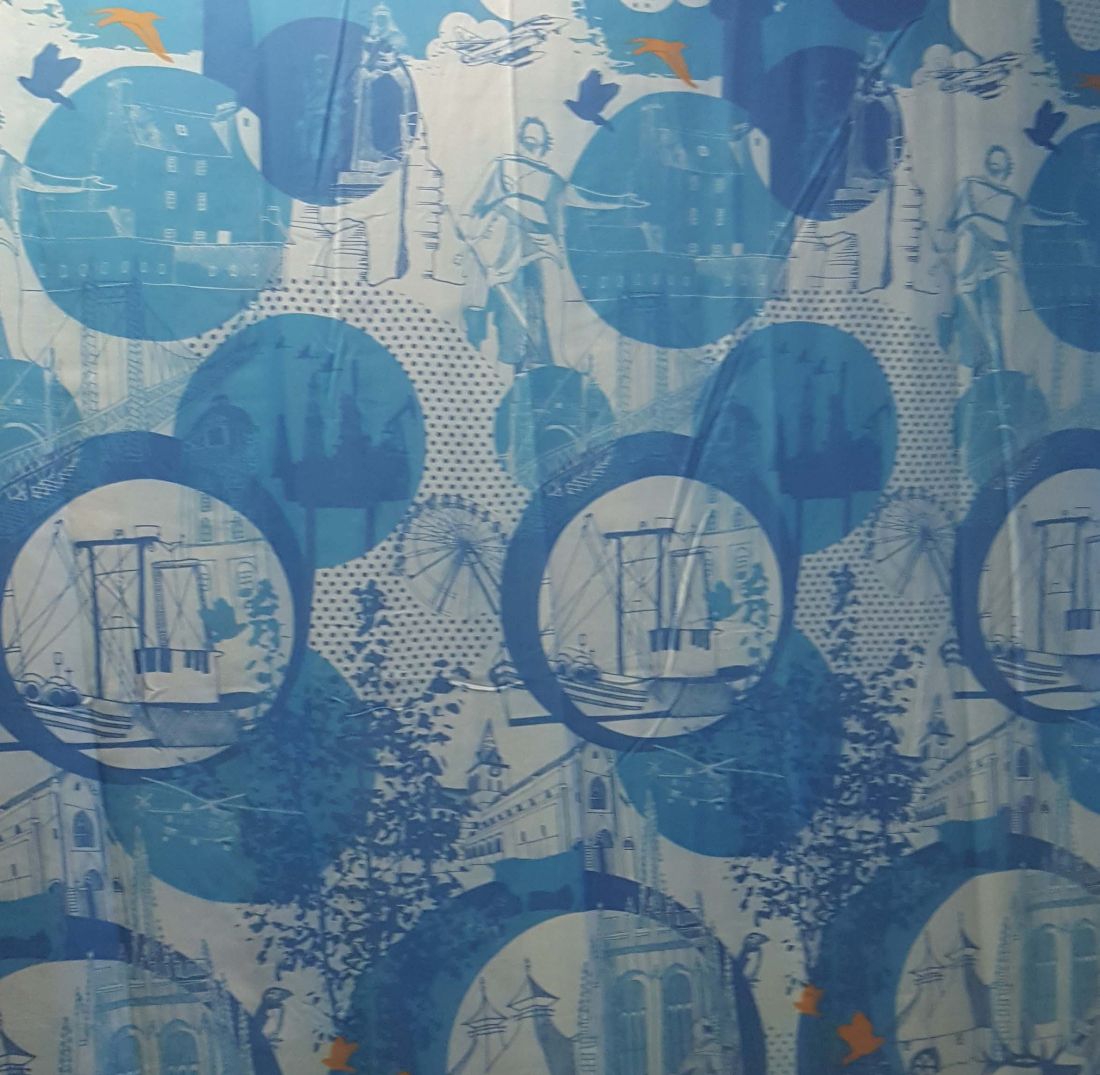 The final curtain at ARI.

That’s me back from ARI. It’s a fine place if you are just visiting if truth be told. If you are an inmate, then maybe that’s quite a different story.

I went in with an open mind. After all the nice admission nurse only asked me stuff about the months of the year and my CHI Number. Seemingly if you are old and ill, they need to check that you are not mad.

What the feck is a CHI, I wondered while reciting the months backwards from D to J.

“Who is the Queen?” she said. I reflected on the various times I have almost met the monarch and still had no answer.

How should I know? After all she – that is if she is a she and not an ageing robot – only asked me what a spurtle was. Or was that her dead sister Margaret?

Fortunately, she refrained on this occasion from asking the dates of the beginning and end of the first war. I had that in my sights. Well it really depends on whether you think that the war ended on Armistice Day in 1918, or on Peace Day in 1919 or in 1946 after the surrender of Japan. Revisionist historians all around the globe have been arguing the point for decades and who am I to disagree.

Whatever, I doubt if Royals eat porridge anyway. And, if they did, they would probably deny it. 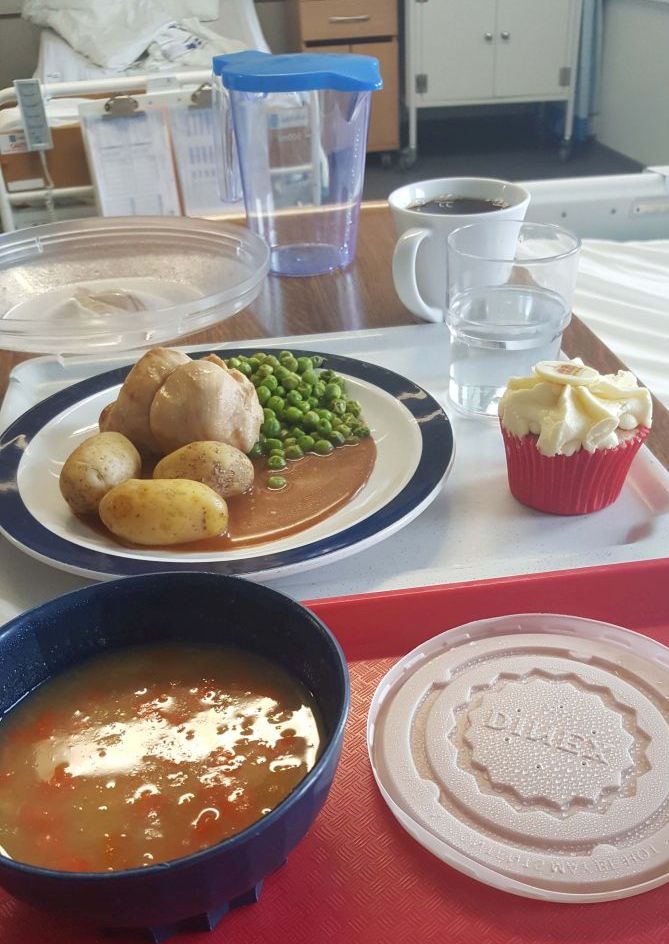 The folk in hospital-land were mainly really nice.

When the queen came to open the Chelsea Roof Garden, they served cake on a red tray complete with a bowl of Royal soup and something called Balmoral Chicken.

The folk on the ward ate it if they could apart from the man in bed four who was on a fast – before a procedure.

Like in Ramadan, we all – apart from the man in bed 2 – tried to eat unsuspiciously lest bed four became jealous.

In the end it came down to the keeping of the Royal menus. Bed 4 donated his meal to newly arrived bed 1 on condition that the Royal menu was kept for him as a souvenir.

More fool him. The kitchen staff, who normally issued copies of the food order, had that day decided to keep the food trays pristine.

Not for us the usual check-list of what we had – often in a morphine-induced dream state – ordered. For today there would be no auditing of food and no chance of complaining about a mis-order. 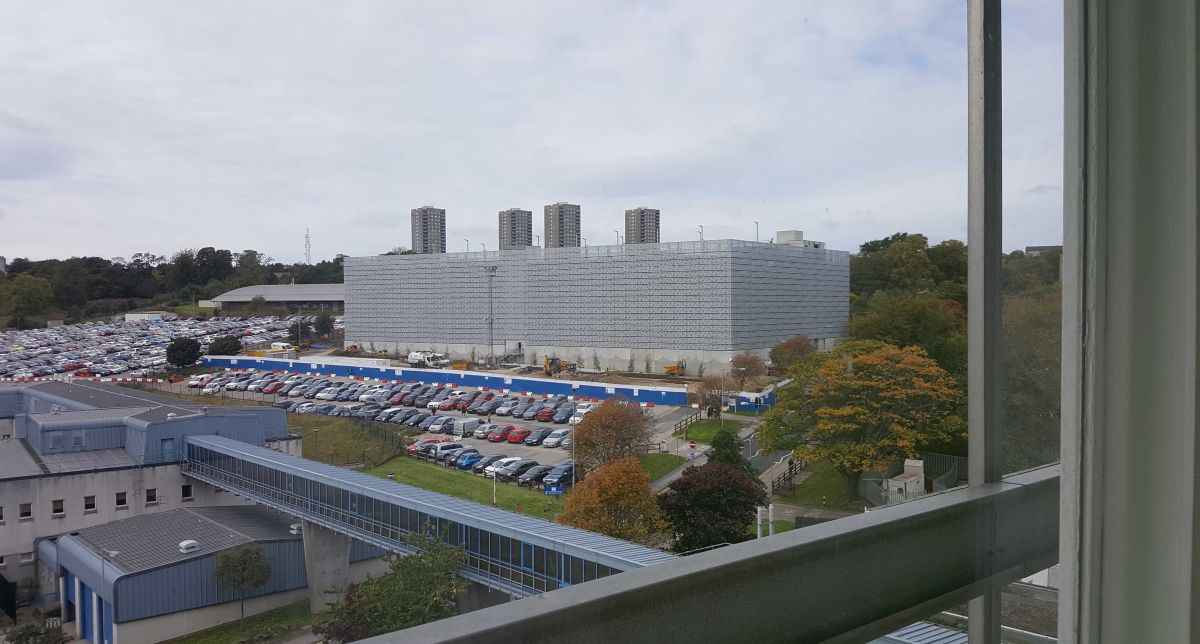 In my case, I ordered Glamorgan Cheese something or other from the Duchy of Cornwall plus a bowl of Royal Game Soup.

What arrived was Balmoral Hen complete with a stuffing of Game Haggis.

It was fine. And I can’t really complain. In fact, in all of my ARI days – the food was fab.

The company was generally good and there was a fine view of the new Wood multi-story car park from the window of the day room.

The dark side of the coin …

Well, there was the blood man.

Sad and a relic of a former self, he made me feel humbled as he stumbled around the ward.

Here is his tale. Read it if you dare and reflect quietly that it could be you or yours in a future year:

‘After the bloodbath of the night before, all seemed quiet in the ward. The blond bigmouth in the corner lay curled up beneath his hospital blanket and the sun streamed in through the blinds at the far end. An occasional phone went and the buzzers summoned the bustling staff.

Us of us patients who could, slept or read. And, just above the hum of the air-conditioning, an occasional snore could be heard.

The blood-man, for that is what we called him after the night before, had quietened down and was brought back into the ward. Bigmouth continued to complain to anyone who walked past. Seemingly he had been a victim of the night before and had had to have his bed changed due to spilt blood-soaked urine. Shamefully he told the night’s tale to the relatives next day despite ample warning from bed four that all that happens in the ward, stays in the ward. Such abominable patients can be a pain.

Naked and full of good intentions, the blood-man had – in the best possible taste – become unpopular. But what he had done must remain secret, for if revealed then heads might roll and his unpopularity might become infamy amongst his peers. And, we shouldn’t countenance that at any cost.

Suffice it to say that he had lost both his Press and Journal newspaper plus a full three pages from the Daily Telegraph. The loss of the P and J was easily solved. They say they sell 60 thousand of the bloody things each day in Aberdeen alone and the man in bed two happily donated a copy to compensate the blood-man’s loss.

As for the Telegraph, we were all at two’s and three’s. After all, the blood-man’s wife had seemingly taken the missing pages.

“I can’t find three of the pages of my Telegraph” he had said.

“My wife has probably taken them. It’s exactly the sort of thing she might do” he concluded.

We, apart from the blond bigmouth – who was by that time AWOL and possibly meeting a friend with vodka at the lift on level three – remained sceptical. But, of course you never really know what’s going through a man’s mind.

Maybe Mrs Blood-man had it in for the man. Or maybe she was simply looking out for him. Or maybe it was all in his imaginary world of pain, urine and shit.’