This will be a familiar story to those Aberdonians who tried and failed to stop the Donald Trump golf development on the Menie Estate North of Aberdeen. By Duncan Harley. 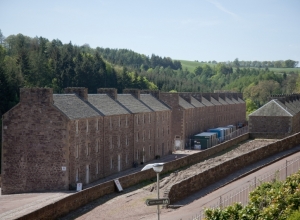 Local voices are silenced and the powers that be give the go ahead for the development.

Only this time it’s the UNESCO World Heritage Listed village of New Lanark and the iconic Falls of Clyde which are under threat.

New Lanark is best known as the social experiment set up by Robert Owen. Owen, a social reformer, had seen first hand the results of the abuse of the labour force in the early stages of the Industrial Revolution and formed the opinion that better conditions would improve production as well as improving the lives of the workers in the cotton mills.

Robert Owen’s view was that a “permanent cause of distress was to be found in the competition of human labour with machinery and that the only effective remedy was the united action of men and the subordination of machinery.”

Between 1799 and 1813 he improved the lot of the workforce at New Lanark. He introduced educational provision for both children (who formed a significant portion of the workforce) and adults and improved housing and access to basic foodstuffs by pioneering the Cooperative Movement. Street lighting was provided as was free access to medical treatment and state of the art sanitation and water supplies.

The village of New Lanark became a model for social reformers both in the UK and across Europe.

By the 1960’s however the village was under threat from general neglect and the mills finally closed in 1968.

The Lanarkshire County Council of the time seemed largely uninterested in the village and it was only through the work of the New Lanark Association that the buildings and heritage survived. Houses were renovated and over time the village gained a new status as both a living museum to social reform and an historic place to live and enjoy the beauty of the surroundings. 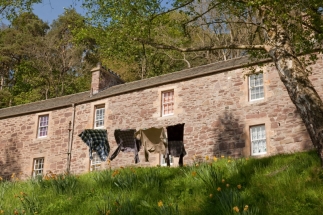 This is a council with a long history of unusual decision making however.

In the 1970’s the Hamilton Palace Grounds were sold off to developers and are now home to such iconic brands such as “Carpet for You World” and “DIY Disaster Planet”.

This despite the land having been left “in perpetuity” to the people of Hamilton by the Duke of Hamilton’s estate.

Also in the 1970’s the council approved the plan to create Strathclyde Park which neatly packaged the flooding of the local marshland habitat of Bothwell Haugh to create a weed infested nitrate rich waterway with a US style fast food “Fun Park”.

Locally the park is known as Junkie world and most folk avoid the place in the summer evenings due to the risk of being run down by joy riders or even mugged.

The industrial heritage of the area was largely ignored and local opinion was also largely ignored. The various layers of local government felt that they new best. Sound familiar?

Then along came a few new industrialists who have promised the area income from open cast mining. The Clyde Valley is now scarred with open cast coal and sand workings. The idea of course is to strip back the topsoil for re-instatement when extraction is complete. However the nature of the process means that woodland, grassland, dykes, copses and hedges are destroyed and wildlife habitat at best interrupted and at worst completely destroyed.

Now it seems that  Comex, a Mexican multinational mineral extraction conglomerate have filed an application to expand existing opencast quarrying operations just upstream from New Lanark village at the Falls of Clyde.

The falls are the power source which powered the Robert Owen mills and are a rich habitat as well as an iconic beauty spot. The proposed new opencast workings will be visible from the New Lanark valley and the noise of the extraction machinery will invade the tranquillity of the heritage village.

Comex are of the opinion that the 3.6 million tons of sand and gravel it plans to extract from the countryside beside the falls will have no visual impact. Campaigners completely disagree. Many fear that the potential loss of UNESCO status will further damage the site since the initial 6 year extraction application will no doubt lead to further applications in the future and if the UNESCO listing is withdrawn it makes it more likely that subsequent applications will in fact be approved.

The area is supposedly protected by a series of planning policies. In 2012 it was promoted to a Category 1 Area – representing the highest level of protection against quarrying. But given the history of the local authority in the past and the pressure for inward investment the local’s and protest groups such as Save our Landscapes (SOL) are very concerned to say the least.

Why, I hear you ask, should this matter to the folk of Aberdeen and the North East? 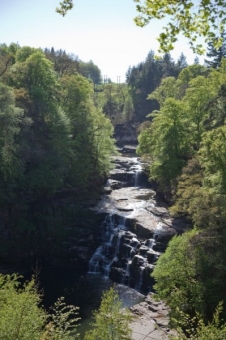 Scotland has a mere four UNESCO listed World Heritage Sites. In no particular order of importance they are St Kilda, New Lanark, Edinburgh Old and New Town and Skara Brae in Orkney.

There are in fact 4.5 if you count the shared listing of the Antonine Wall with Hadrians Wall and the Northern Roman Empire’s Reaches but it may be better to let Alex Salmond sort out that issue sometime in the future.

The Criteria for Selection are stringent and loss of listing can occur if the criteria ceases to be met due to changing circumstances or failure of a country’s politicians to protect the site.

To be included on the World Heritage List, sites must be of outstanding universal value and meet at least one out of ten selection criteria.

New Lanark ticks all of the above boxes!

“Heritage is our legacy from the past, what we live with today, and what we pass on to future generations. Our cultural and natural heritage are both irreplaceable sources of life and inspiration. Places as unique and diverse as the wilds of East Africa’s Serengeti, the Pyramids of Egypt, the Great Barrier Reef in Australia, the Potala Palace in Lhasa, Tibet and the Baroque cathedrals of Latin America make up our world’s heritage.”

According to the protest group Save our Landscapes, if the new opencast workings are given the go ahead:-

“The quarry would destroy the landscape that forms the setting of New Lanark and the Falls of Clyde”.

If the situation resonates with you then you may wish to consider e-mailing Michael McGlynn, Head of Planning at South Lanarkshire Council. His e-mail address is planning@southlanarkshire.gov.uk  and you should to quote planning ref: CL/12/0525 and give reasons for your concern or objection.

You might also wish to contact your local MSP although you should be aware that Aileen Campbell, MSP for the area, has assured constituents:-

This, despite the fact that to date Historic Scotland has done little to intervene apart from stating that the quarrying operations will not be visible from much of the site and that the extraction process by the Mexican quarry firm will only be for six years.

Mexico has 31 UNESCO listed sites including the Whale Sanctuary of El Vizcaino in Baja and the Ancient Industrial Facilities of Tequila near the Rio Grande River.

I suspect that any Scottish firm wishing to extract minerals from these heritage sites would be subject to ridicule by the Mexican authorities. Let’s hope the local and parliamentary bodies in Scotland see sense on this issue.