When Dons fans of a certain age reminisce about their heroes of the1960s, this can be a short discussion. Certainly Charlie Cooke would be mentioned, maybe Jinky Smith and, at a pinch, the young Martin Buchan, although his major successes were still three or four years into the future. 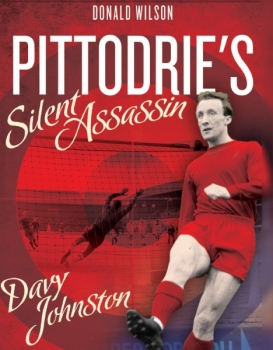 Heroes were thin on the ground at Pittodrie during those barren years. However, as a loon growing up obsessed with the late 60s squad, they were all heroes to me, and among them was Davy Johnston, whose goal-packed career is commemorated in Donald Wilson’s affectionate tribute.

Davy, you see, was a hero to hundreds, if not thousands, long before he made his Aberdeen debut shortly after signing in late 1966. He was already a legend in the Highland League, where his goals and influence on the great Nairn County side of the early and mid-60s are still remembered by those fortunate enough to have witnessed this very special player. He was Donald Wilson’s hero too, and as Morrissey once warbled, it’s time the tale were told.

Drawing on formidable local press research and anecdotal evidence from star witnesses such as Davy’s contemporaries and fans at Nairn, Aberdeen and Inverness Caley, Wilson paints a picture of a prodigiously-gifted footballer whose modesty almost outweighed his talent. Unfortunately, so did his lack of self-belief and his inability to come to terms with the demands of the city and the expectations of a full-time footballer ultimately saw him return to his Highland League comfort zone after less than three years in the sacred red. Happily, Johnston carried on where he left off and he thrilled Highland League fans for a further seven seasons, playing a bit part in Nairn’s finest hour, their dramatic clinching of the 1976 championship.

I was privileged to have seen Davy in his prime at Pittodrie, and in his Highland League heyday and it still saddens me that he did not go on to be the success that his talent deserved. For those who missed out, Pittodrie’s Silent Assassin tells the whole tale in a very readable and superbly-researched style. There should be much more of this sort of thing.

Deveronvale, perennially among the clubs tipped for trophies, are one of four clubs sitting on no points after Clach, unlucky at Buckie last week, came raiding and sauntered smugly back to the Highlands with all three points and a stunning 3-0 victory. END_OF_DOCUMENT_TOKEN_TO_BE_REPLACED