Aberdeenshire farmer Michael Forbes, his wife Sheila, and his mother Molly have become a focal point for those opposing Trump’s plans for creating a golf complex over the shifting sand dunes of Menie on the Aberdeenshire coast.  Trump has called their home a ‘pigsty.’  Letters of support flowed in from around the world to the farmer supporting his brave stance against the billionaire. 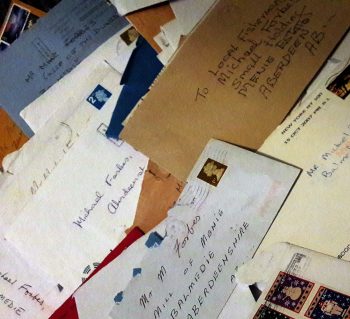 When Anthony Baxter and Richard Phinney came to the Menie Estate to film their first documentary about the mogul’s presence and practices, they created the award-winning documentary, ‘You’ve Been Trumped’.  During the course of filming, Trump’s construction crew ‘accidentally’ shattered the water pipe bringing water to the Forbes’ property.

For one week, the Forbes remained without water, so the filmmakers went to the Trump site office to ask when the water would be restored.

The family had been taking water in buckets from a nearby spring or burn in which to cook, bathe and clean.  The response of the site manager was to tell Anthony to ‘be a jewel of a system’ and the water would be restored to be the ‘best’.

Hours after that exchange, Baxter and Phinney became the first journalists ever to be arrested in Scotland while working on a story.  Sarah Malone-Bates, the Trump spokeswoman coincidentally married to local newspaper editor Damian Bates, recently confirmed that the Trump organisation called the police to make that arrest- and the police dutifully complied.  The duo was later released without charge and the NUJ condemned the arrests.

Despite the verbal promise Trump failed to do anything about the water:  for five long years.  The Forbes family relied on water from that burn, on bottled water, on rain water.  Imagine 5 years without running water in 21st century Scotland.  This is covered in Baxter’s newest documentary, ‘You’ve Been Trumped Too.’ The police were keen to arrest the journalists and harass Mr Forbes over issues of access across land, and were going to charge him for theft when he removed Trump marker flags worth £11 which appeared with no explanation in property he believes to be his. The police failed to take any action about the pipe the Trump organisation broke, as did Aberdeenshire Council, which waived through over a dozen planning breaches the Trump organisation made granting ex post facto planning permission. 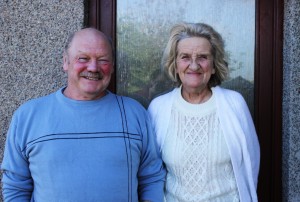 Only recently, Michael Forbes restored the water himself, sparing his 90-something-year-old mother the work of filling water bucket from a stream.

Virtually none of this is reported in local paper The Press & Journal, while there are articles praising Trump’s restaurant and facilities; the marriage of Bates and Malone is seen to influence the editorial policy.

The paper went so far as to give the POTUS hopeful an ‘exclusive’ column in which he boasted of having won over the Scottish people.  The bags of post arriving in support of the Forbes family tells a different story.

If you can conclude from this tale of Trump’s behaviour in rural Scotland that his promises are hollow, that he seeks to intimidate those less fortunate than he, and that he can influence how the powers that be protect the weak, you are not alone.  For the Forbes family received letters from around the world following the release of ‘You’ve Been Trumped.’

Sheila Forbes said she is happy for the contents of these letters to be shared.  “People have been very kind, and we never received a ‘bad’ letter.”  The Forbes family wish they could answer all of the letters, but they have truly been inundated.  The whole family is overwhelmed by how kind and supportive people have been. 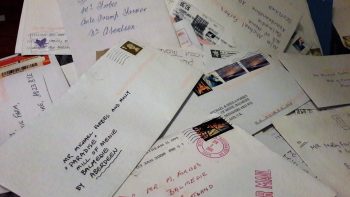 If the show of hatred and intolerance which seeped out of the Trump rallies has dampened anyone’s spirits, these letters affirm that there are still many thoughtful people who take time to show support and offer help to others.  One gentleman from Worcester, Massachusetts generously sent a cheque for $100.

None of the cheques or cash received has ever been spent to date.

These kind-hearted correspondents have had much to say.  Here are some quotes:

“… congratulate you on standing firm against the arrogance of Donald Trump.  We wish you well!  … You are right to protect your land and that of your forefathers.” (Wiltshire)

“So many golf courses all over this earth especially in poor countries for the rich play and the poor starve.  I wish you well and that the strong heart and spirit of Scotland still lives.” (Wales)

“I applaud you for not wanting to sell your land to Trump, he’s not ‘king of the castle’ just because he has the money does not give him the right to demand and have things given to him on a silver spoon.” (Illinois)

“Mr Forbes, too many people give up their principles for money.  I truly admire you for standing your ground.  Congratulations for taking on the giant.” (Massachusetts)

“[if] the Councillors are only able to see all the wonderful income the shire is going to get from ‘The  World’s Greatest Golf Development’, I think they may be in for an awful surprise.” (Las Vegas)

– and so it has transpired, with the club posting losses of millions year after year, and only 95 jobs of the promised 6,000 having materialised.

“The only one that will look silly in the end is Trump” (Warwickshire).