Two planning enforcement notices have been served by Aberdeenshire Council on Avant Homes in respect of the former Kingseat Hospital development near Newmachar.
The action by the Council’s planning service follows a report on Kingseat, instigated by East Garioch councillor Martin Ford, that went to the Garioch Area Committee in June.

Cllr Ford has welcomed the decision to serve enforcement notices. He said:

“I am very pleased by the response from the Council’s planning service to the Member Promoted Issue report on Kingseat discussed at the Garioch Area Committee in June. Actions are now being taken that will put real pressure on the main site owner to complete at least some of the outstanding planning requirements.”

The planning enforcement notices served relate to the storage of spoil and materials and failure to install a play park, required from the developers as part of the overall Kingseat planning permission. The developer has 12 weeks from 20 October to clear the spoil storage area and create a new open space including play equipment.

If the developer wishes to appeal the enforcement notices, it must do so by 19 October.

“Under the Councillors’ Code of Conduct, councillors are not allowed to press for particular planning enforcement actions. Such decisions are for officers in the planning service. The decisions officers have now taken regarding Kingseat have my wholehearted support.

“I do think Aberdeenshire Council was far too passive for far too long in dealing with the stalled development at Kingseat. Of course, the Council cannot simply order the developers to complete the whole development, it doesn’t have that power. But the Council can proactively pursue obligations the developers have under the legal agreements associated with planning permissions, and take enforcement action over non-compliance with those permissions.

“There is clearly now a new determination to use the powers the Council does have to try to force the main site owner to undertake further work stipulated by the permissions granted and agreements signed. That has got to be very welcome.”

Aberdeenshire Council hopes Avant Homes will comply with the enforcement notices. In the event of non-compliance, officers in the Council’s planning service will decide what action to take. This could include the Council undertaking the work required and recovering costs from Avant Homes and reporting Avant Homes to the procurator fiscal for non-compliance.

The Council is also reviewing other options for action to get work progressed at Kingseat, including Avant Homes’ obligations under Section 75 legal agreements.

In order to preserve the historically important former hospital site, Aberdeenshire Council granted planning permission for a mixed use development at Kingseat in December 2004. The first new homes at Kingseat were completed on 21 February 2006 – so some residents have now been living in an unfinished development for over eleven years. The lack of a play park is just one very obvious failure by the main site developer.

The Council’s long-standing policy on preserving the historic buildings at Kingseat is reflected in the agreed development brief for the site.

“The goal has to be to get the whole development finished and see the fine buildings that are currently derelict brought back into use.”

East Garioch councillor Martin Ford has expressed his frustration at the lack of scope for Aberdeenshire Council to pressure the developers into resuming work on the unfinished development at Kingseat.

Planning permission for a mixed use development based on the former hospital site at Kingseat was granted on 9 December 2004. The first new homes at Kingseat were completed on 21 February 2006 – so some residents have now been living in an unfinished development for nearly ten years.

Cllr Ford wrote to Aberdeenshire Council’s head of planning and building standards on 21 October 2015 calling on the Council to see if it could get work resumed at Kingseat.

“we cannot insist upon a developer restarting development unless there is a particular issue with the condition in which the development has been left that would require Council action. In this case these have been considered and discounted. “

“On the core issue of getting work on the stalled development restarted and completed, Council officers have looked at the options and powers available to the Council. Unfortunately, their conclusion is that in the circumstances the Council cannot compel action by the developer – Avant (formerly Bett) Homes – to complete their development.”

In his letter of 21 October, Cllr Ford raised a number of other concerns – besides non-completion – relating to the unfinished development at Kingseat. These included the absence of the promised children’s play area, the security and safety of empty buildings and the lack of maintenance of the former hall.

In the planning service’s reply to Cllr Ford, officers have confirmed that action has been taken to secure the undeveloped area owned by Avant and that action can be taken over the maintenance of the hall.

“I have asked officers to advise what the Council plans to do about the hall maintenance issue,” said Cllr Ford. 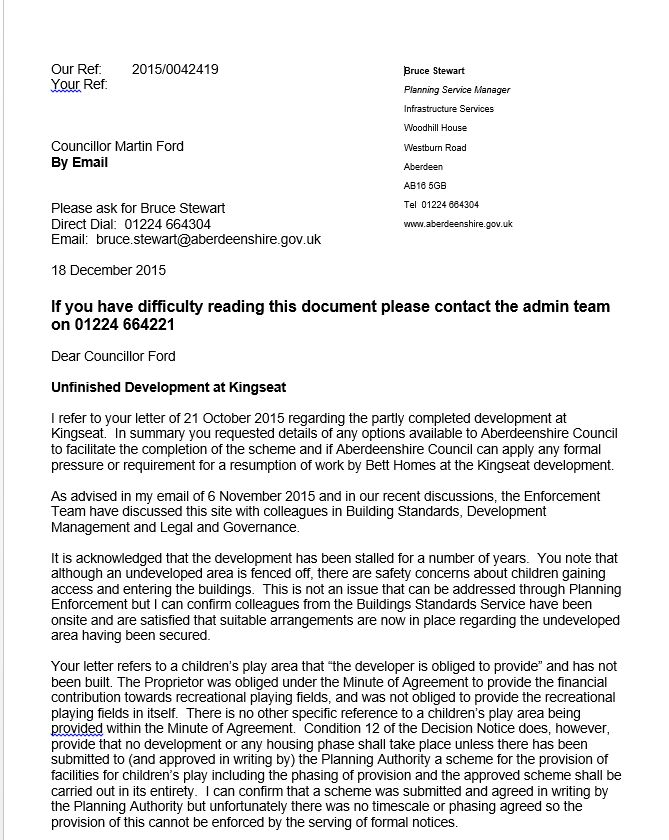 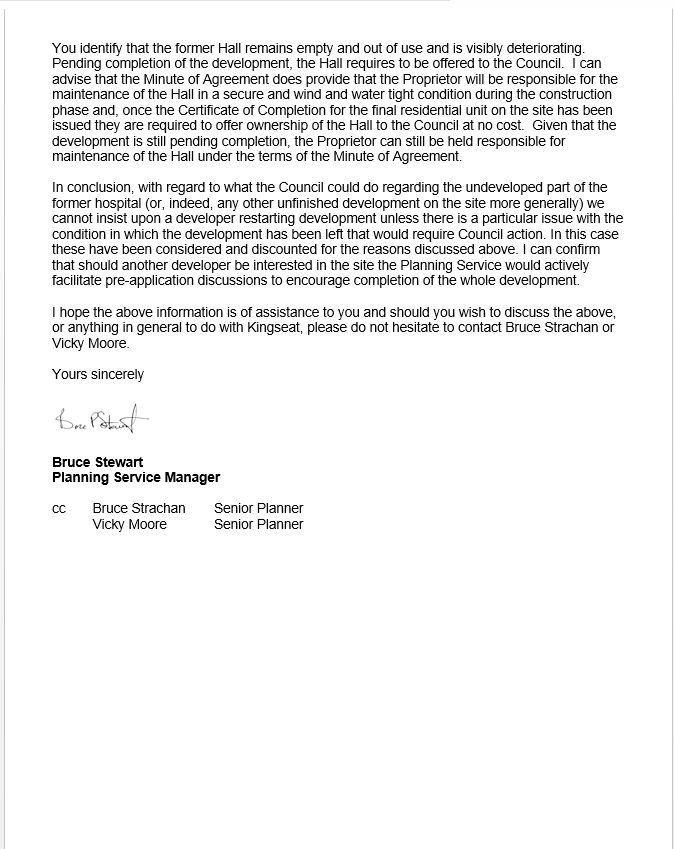 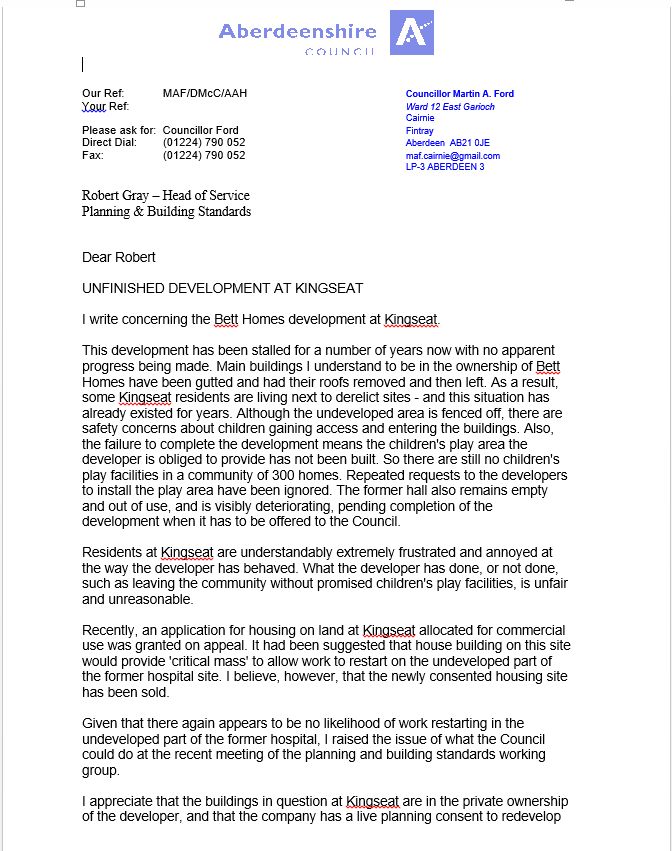 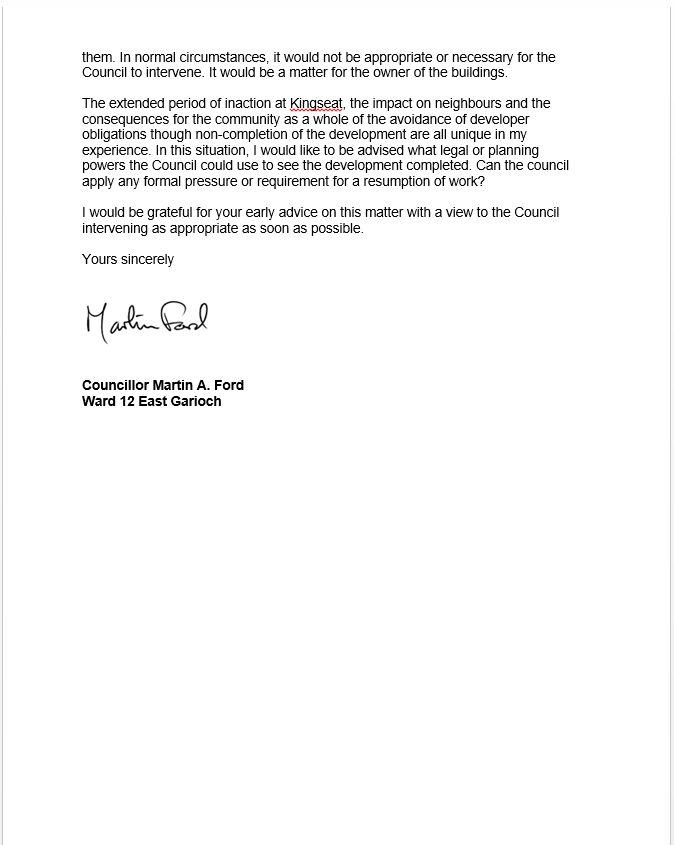