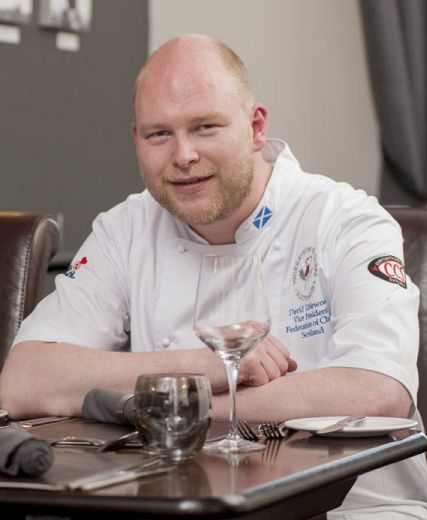 With thanks to Eoin Smith, Sen. Account Executive, Tricker PR.

The Federation of Chefs Scotland has appointed its youngest ever President.

David Littlewood (34), chef proprietor of both The Tor Na Coille Hotel in Banchory and The Kildrummy Inn by Alford, was elected President at the organisation’s AGM in Glasgow.

He has also held the accolade of Grampian Restaurant of the Year, was a member of the Scottish Culinary Team and is a Masterchef of Great Britain.

David says of his appointment,

“I was very lucky to be mentored by great chefs in my early career; they inspired me and challenged me and through this, they showed me the immense value in supporting the next generation of great Scottish chefs. I feel that it’s incumbent upon all of us who have learned from other professionals to continue this tradition.

The Federation of Chefs Scotland is an important organisation in driving up standards and our current members play an influential role in enthusing young people about Scottish food and to work in our industry.”

The Federation of Chefs Scotland (FCS) – run exclusively by Scottish chefs – exists to promote excellence in the industry across Scotland through supporting and developing young chefs through training. Alongside David, Jav Aziz, Executive Chef at Rangers, has been appointed Vice President. Robbie Penman and Vikki Munro have also joined the board.

The FCS encourages participation in culinary competitions, and fundraises to support young chefs to undertake national and international learning experiences. The Scottish Culinary Championships at ScotHot and the Scottish Chef of the Year are organised by the FCS, and the not-for-profit organisation also champions helping Scottish pupils to know more about their food through the Chefs@School project.

There are currently 100 Scottish chefs volunteering their time to work with 15,000 pupils.

“David is the youngest president of the Federation of Chefs Scotland. He’s achieved his success with his passion and drive, not only for his own work but for the development of youngsters in our industry through his supportive mentoring.

“I believe that David’s focus on attracting young talent and developing and challenging them to achieve is the way forward for the Federation. I know that David will make the Federation stronger in all different areas of our work and I wish him well during his tenure.”

The 25-bedroom Tor Na Coille Hotel has been a landmark building on Royal Deeside since the reign of Queen Victoria. David and his team, which includes 2017 Scottish Culinary Championships Scottish Chef of the Year bronze winner Colin Lyall, have begun to develop the hotel restaurant as a must visit foodie destination. More about the Tor Na Coille can be found at www.tornacoille.com.