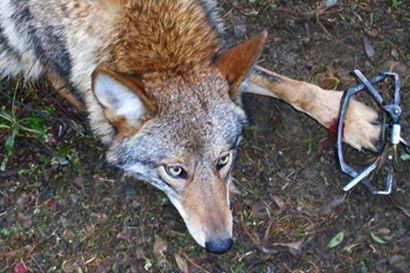 Several parents attending regular awareness events in Aberdeen, bring their compassionate young children, who have clear ideas on the animal welfare issue of fur farming. When you talk to these children they are naturally aware that killing an animal that has feelings is wrong.

They question everything including; why would you kill an animal for its fur and pay lots of money to wear it on a jacket, bag or hat?

“We allow the children to come as we are peaceful and want people to see even children know fur is wrong, we work together to collect signatures and hand out leaflets informing people of how barbaric skinning an animal alive for fashion is” explains Fiona Melvin (Co-founder of Say No Fur to Aberdeen Fashion).

Good question why are we so disconnected to the feeling of other animals, is it because they don’t speak our language? If you talk to someone who rescues an abused animal they will tell you how the animal responds to set emotion and responses. With kindness, structure and love they become confident and display affection. Which should open questions of why we feel we have the right to cause pain and suffering to other animals just to wear their skin.

“I feel Really strongly about the use of real fur, and we feel so upset to think people are actually buying it even when some know how it’s sourced and there’s plenty of alternatives without harming animals” said Laura Lotus Flower.

What the recent article in the local press – apart from unfounded claims by Escale France – failed to address, was the animal welfare in the fur trade or rather the lack of it. In this instance one shop Escale France named in the Press & Journal, is more than aware of the suffering of animals for the fur items bought in Europe to be displayed in her boutique. Profit margins versus animal suffering; with no information on the animal suffering being mentioned. I aim to address the balance.

Isobel from The Coalition to Abolish the Fur Trade (CAFT) states:

“People who buy fur intentionally, have been told by retailers that fur products are ‘responsibly sourced’ and come from ‘humane fur farms’ – in all of our investigations we have never seen any evidence of ethical or humane fur farming, and what’s more we cannot agree that it is ever ethical to take an animal’s life for the purposes of fashion.”

In fur farming there is no day light let into the large barns that the animals are housed, the cages are small, metal surrounds them. They do not see any human kindness, food slop is throw in as they squirm and writhe around often covered in their own faeces…they squeal to each other communication. In a prison waiting for the day they are dragged from that hell, to the pain of its slow death.

What about the trapping method? Days go by without the trap being checked, the animal caught may be endangered. In agony the animal chews at its limbs in desperation to free itself. It might have a litter waiting for feeding. So much suffering…

When you are told they don’t get skinned alive, you are being lied to. 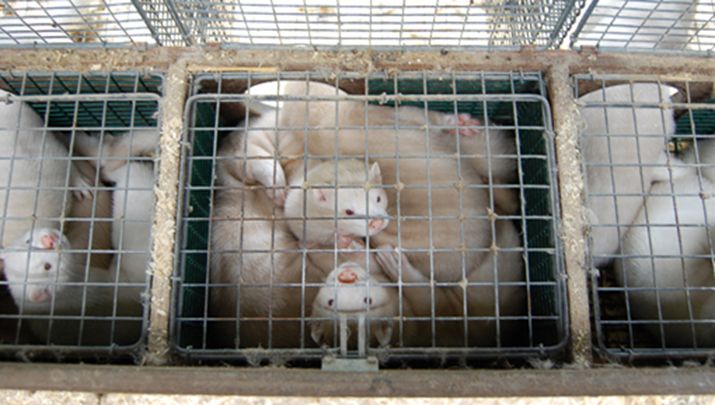 They are close to death but still their hearts beat, they are often still breathing, semi conscious. There is no vet checks to minimise suffering. They can’t move because they have been stunned or particularly gassed.
They have endured, suffered …and then their bodies are dumped useless, dying from the horrendous pain of having their fur taken, crushed in the final blow by mechanical machine.

That is just mink farms. What about foxes, rabbit, raccoon, dog, cat they are all animals that feel? Does it matter? Yes it does. We should care how fur is being produced, because it has come to this. We banned it in the UK so we could stop the cruelty. Yet we allow it to happen elsewhere so we don’t have to care.

“Animal welfare has never been at the top of the government’s agenda, especially our current government who have tabled such things as repealing the Hunting Act. This is why this is a social struggle, to raise awareness amongst the public about the horrors of the fur trade, encourage the boycott of any shop that sells real animal fur, and ask retailers to adopt fur free policies in their stores.”

People from Aberdeen care, they were not from animal activist group, they found others cared. They came together online, they researched what happens, they emailed other organisations which had the proof of what goes on behind the scenes. They have had open dialogue with three other shops in Aberdeen. Two of those shop owners signed the petition against Escale France. They didn’t agree with selling fur for vanity, currently the signature total for the petition is 1600.

One owner who had old stock on sale, agreed to remove those from her shop, along with making us aware she was a vegan and didn’t agree with the fur trade.

Cruise Fashion removed a Canada Goose jacket from the main shop, however, they are still selling fur and there is UK wide protests against this with CAFT. Inverurie Garden Centre had hundreds of customers up in arms with their fur trim accessories. They claim to have removed these items, though allegation have been made by a customer who visited the shop recently of the items still being available. Several other shops in Aberdeen and the North East continue to stock fur items.

John Robins of Animal Concern issued a warning to people doing their Christmas shopping or looking for bargains in the January sales:

“Do not always assume that fake fur is in fact fake fur. Fur is so cheap and unpopular that sellers will dye it bright colours and sell it as faux fur. You also have people saying it’s “only” rabbit or coney fur.

“The argument against fur is no longer just about killing endangered species, it is about the extreme cruelty involved in the trapping, farming and killing of animals for their skins. On fur farms one method of achieving this is by pushing a metal rod up the animal’s anus and electrocuting them. My advice is not just to avoid all products containing fur but to totally boycott all shops that sell any fur.”

We are not talking fur for survival here, we are talking about the suffering of animals for a fashion item, that you or someone you know is buying.

If you still intend on being ‘in trend’ and want to wear faux fur then check out CAFT website for the check list. http://www.caft.org.uk/ Or follow Animal Concern advice and avoid fur trim altogether http://animalconcern.org/

If you have read this and decide you want to support the campaigns against the fur trade please visit https://www.facebook.com/AntiFurAberdeen/?fref=ts

Or email saynofur@gmail.com for more information.

Photos by courtesy of CAFT. 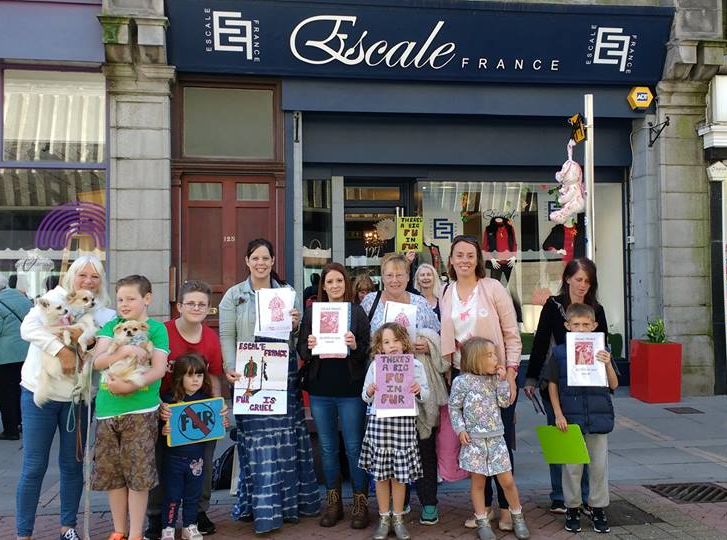 Fur in Aberdeen is not a new thing, yet we became less aware that it was sold, even oblivious to it. Many, including myself, thought a ban on fur in the UK in the 1990s included imports. How very wrong we were.

In the last 5 years shops selling fur has increased dramatically.

Aberdeen has its own supply, quietly located in select elites shops of high end fashion.

Escale France run by Karine Franck is one shop who proudly displays her raccoon, fox, mink and rabbit fur products online and in store. Her designer is the top offender in cruelty fur Jean Paul Gaultier.

The first I saw of Escale France was on Facebook 6 months ago, sharing her new collection of fur items, thousands were up in arms.

“Fur in our area not in my name,” stated some comments.

I was certainly grieved by this and felt something needed to be done. Did the owner know where her fur had come from? How it was made? I asked her face to face, her response was arrogant and unemotional

“Yes I have seen the videos, I know how they die,” she stated unmoved.

A group of like minded people against the shop developed SAY NO FUR to Escale France Aberdeen UK Branch and discussed showing Karine Franck that we would not tolerate fur in her shop. We asked her to listen to her customers, many had commented on her page, disgusted at her products.

“You have such lovely items, why must you spoil it by adding real fur?” remarked one customer.

Our first three demonstration were duly noted by Karine and her male friend, who came out to give us his view which was quite frankly sickening:

“ I would skin my cat and wear it,  I’ve eaten dogs killed alive in China, what is the difference?”

Since our fourth awareness event, one of our members acted out a caged animal being electrocuted. It drew a crowd, bringing the debate on fur in fashion to the forefront. Karine Franck responded by putting more fur items on her display, allegedly claiming to a few customers it was faux fur. These claims dismissed on evidence from her online marketing and advertising.

When I contacted her by email she responded:

This I disagree with as the fur she is supplying is from China and Poland – both have little or no welfare standards. Animals are not killed straight away, often stunned before having their fur removed. In the rest of her email she deflected the subject, avoided direct questions and was not willing to continue in any discussion or debate.

Her justification for selling fur in fashion was:

“Some people watch the Peta videos showing the barbarism inflicted on some animals for the fur. Even if these are examples of bad ranches and slaughterhouses contravening codes of conduct, you can find some of them in leather and meat industries, and to compare with them, the fur production is small.”

I guess that makes it okay then! Even if the videos are real, so what…? Since when did we lose our compassion, become so disassociated with what is fashion acceptable?

We banned farming in fur for one main reason, it was deemed cruel to kill an animal just for its fur…and nothing else. When we investigated Aberdeen’s fur trade, I met a lovely lady Amanda who runs two fashion boutiques, one in Brighton and one in Aberdeen.

When she heard of our campaign she invited me to visit her shop. She was shocked that the public in Aberdeen would allow real fur when there are so many wonderful faux alternatives. Many of these faux items where in her store ‘Sirene’ in Union Street.

“It is a cruel method for a fur trim, why would you stock that when you have stunning traceable faux alternatives”

If Sirene boutique can select faux free and still satisfy her customers, why can’t Escale France?

This is just the beginning with all shops and stalls in Aberdeen/shire being added to a list and working with Animal Concern, Respect for Animals, Craft in future campaigns. If you don’t know what it’s all about please visit the above groups, who have investigated it at length, see what the barbaric trade is all about.

For forthcoming events in Aberdeen email us at saynofur@gmail.com.We have been collecting paper petitions and have an online petition. Please sign.