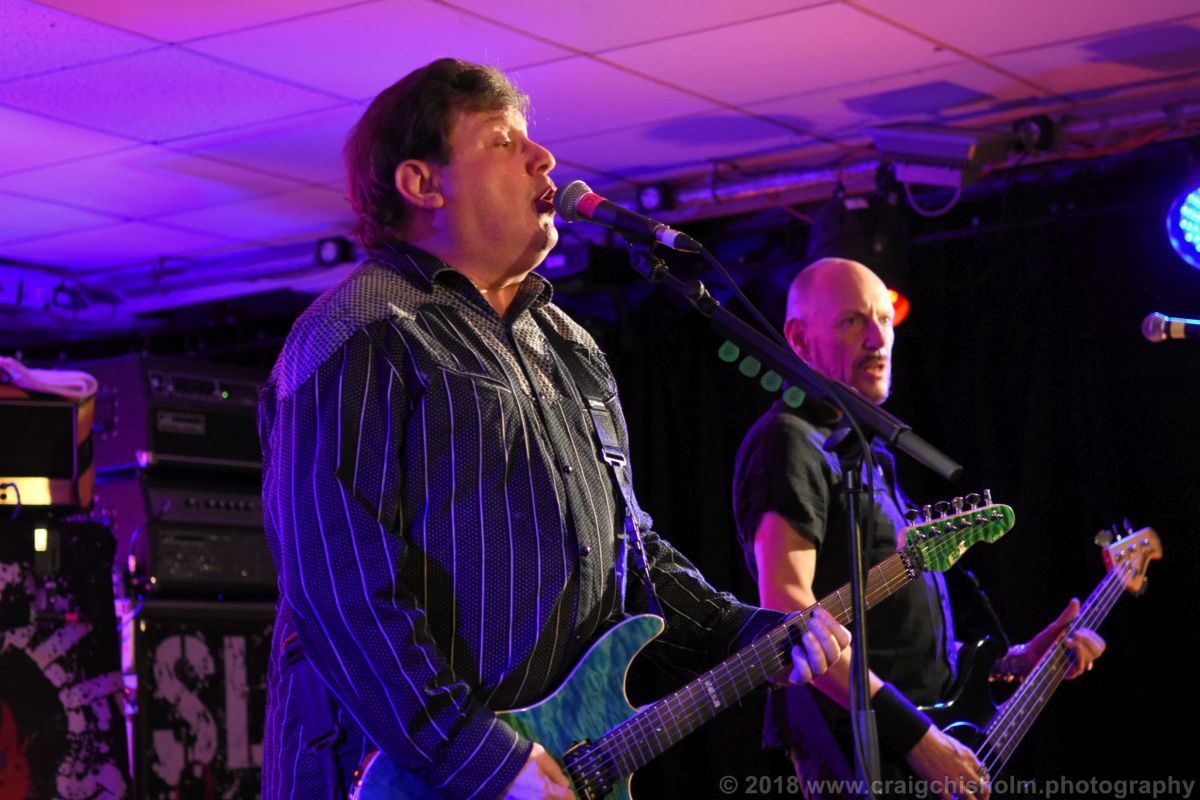 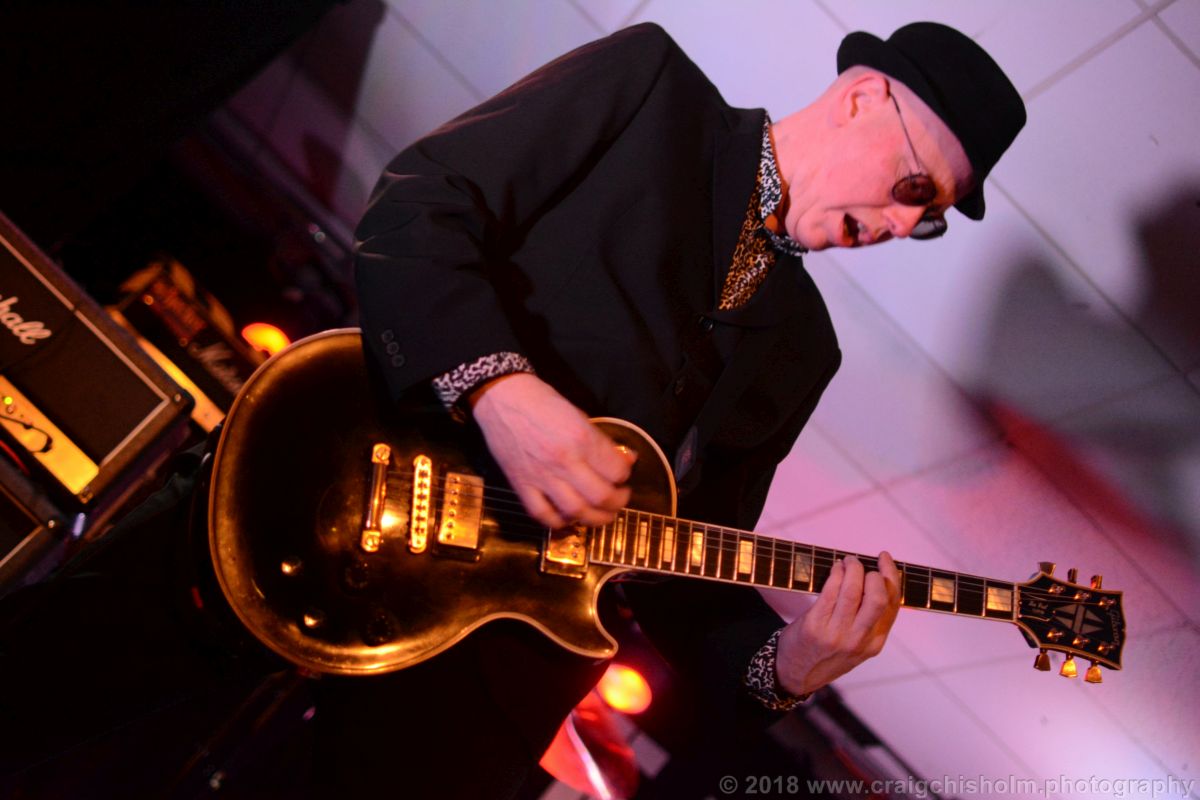 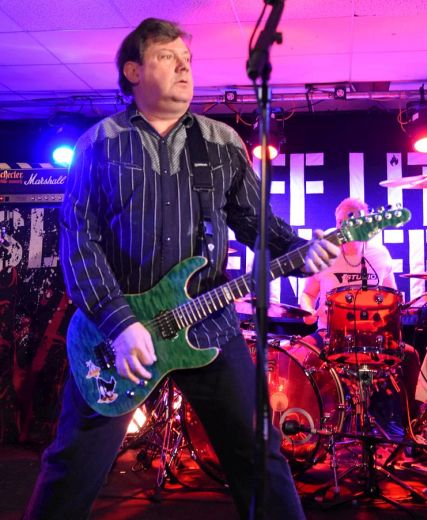 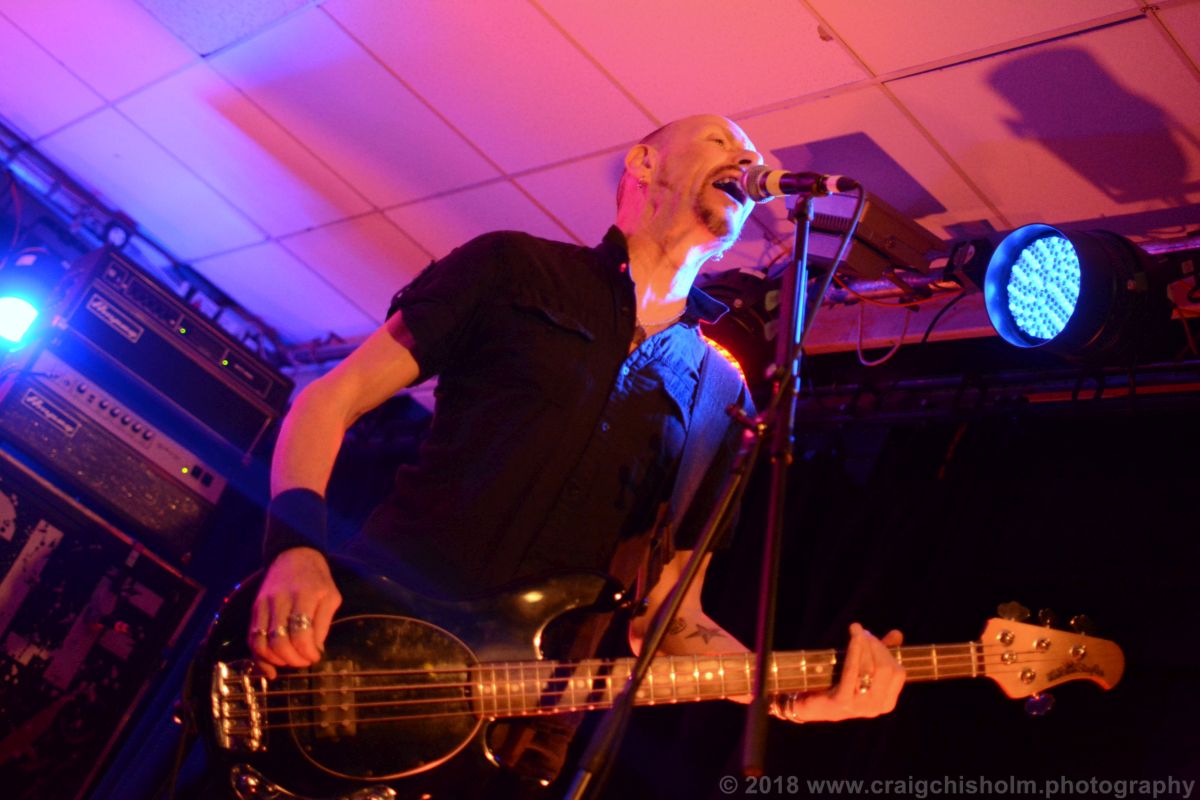 Piratefest 2018 @ The Garage, Aberdeen. Review and photos by Craig Chisholm. 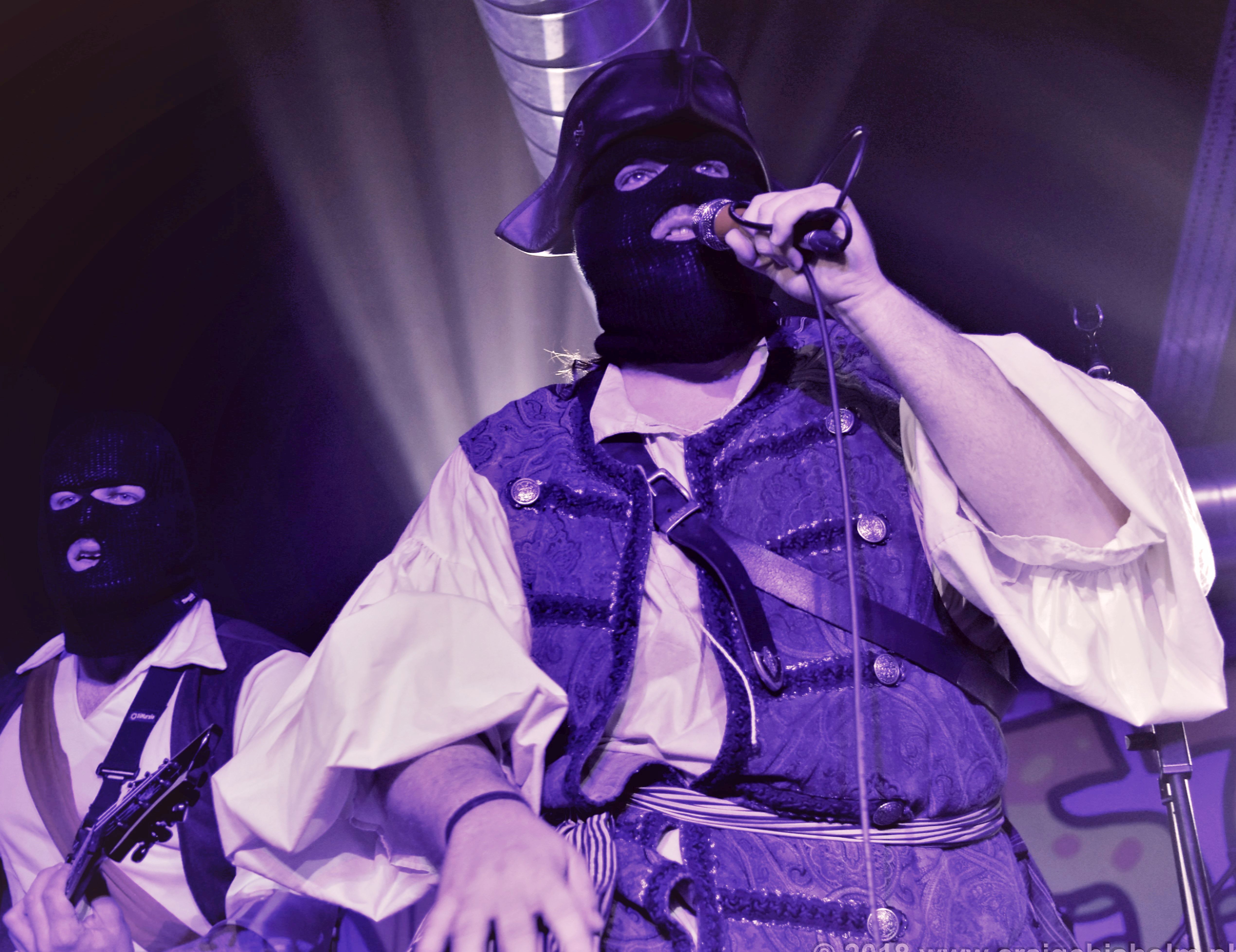 In the myriad world of Heavy Metal sub-genres it might come as a surprise to learn that not only is Pirate Metal ‘a thing’ but that it can also sell out a venue in Aberdeen on an otherwise normal Tuesday night in February.

The Piratefest 2018 tour didn’t, unfortunately, sail into town on a Spanish galleon but rolled in on tour buses carrying three of the premier bands on the scene.

Scottish band Alestorm arrived in the company of San Diego’s The Dread Crew of Oddwood and, from the fishing village of Ocracoke, North Carolina, Rumahoy.

Rumahoy open Pireatefest with a short, but energetic and thrashy, set that includes songs such as ‘AHOY!’, ‘Hoffman The Pirate King’, and ‘The Triumph of Piracy’. 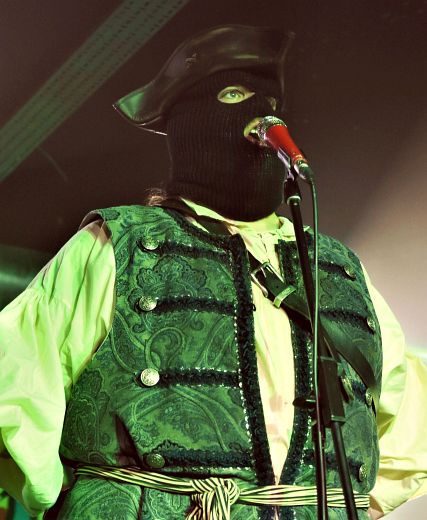 They’ve taken the theme to its extreme in not only song titles but in their look.

Dressed head to toe in pirate clothes is striking enough but the black masks that cover their faces make them even more scary and intimidating.

Lead singer Captain Yarrface (possibly not his real name) is front and centre on stage – a giant of a man, as tall as he is wide, as much NFL Line-backer as he is Caribbean Pirate or rock singer.

They are by far the heaviest of the three bands with a sound that owes much more to Slayer or Pantera than it does to the more traditional pirate sea shanties.

The next band on stage are a slightly less intimidating but no less intense proposition.

The Dread Crew of Odd Wood play – no surprise here – pirate themed heavy rock but, this time, on acoustic instruments. A style they refer to as ‘mahogany metal’. 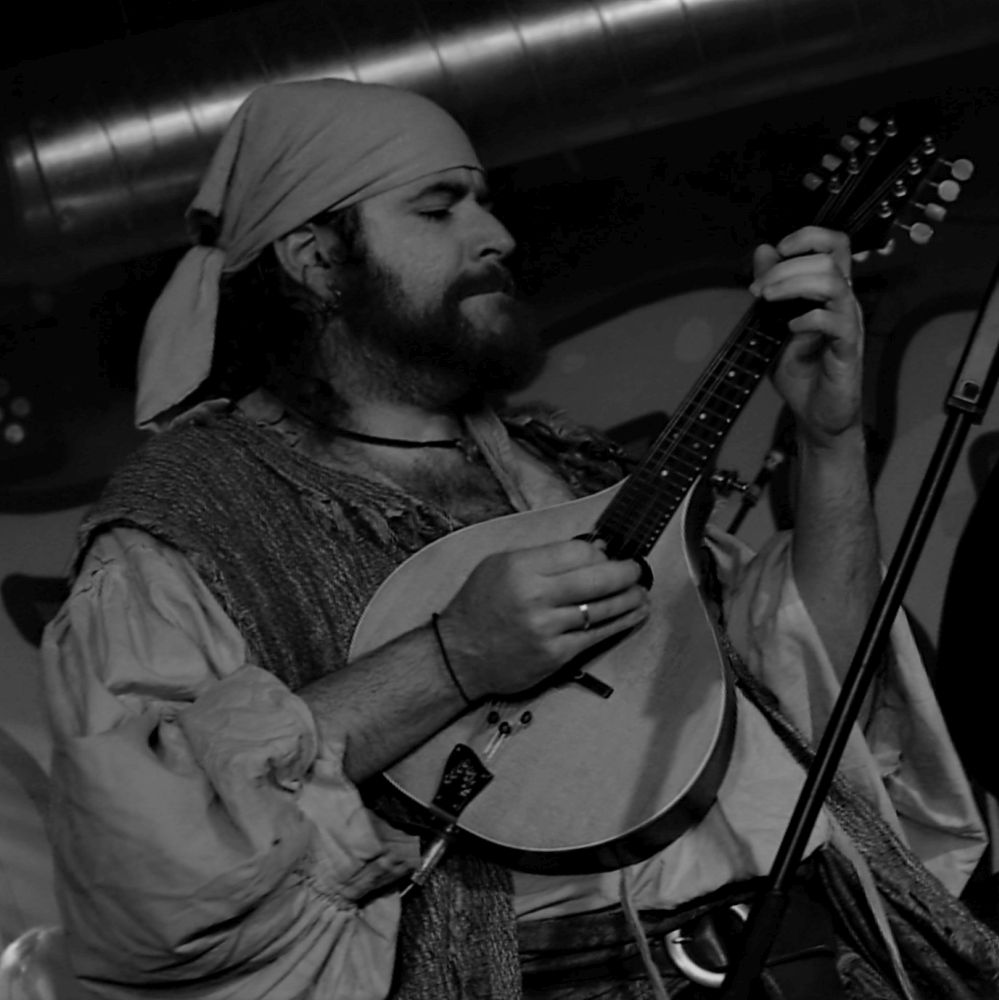 Using accordions, stand-up bass, mandolins and bouzouki their music is a combination of folk music, traditional Celtic jigs and, of course, Heavy Metal.

Again, they are dressed for the part – looking like buccaneers that have just raided a port in the West Indies rather than a modern rock band.

Again, the songs are nautically themed with titles such as ‘Dead Man’s Medley’ and ‘When I Sail’d’.

Drinking is also a common lyrical theme through night with the Dread Crew’s contribution called ‘Raise Your Pints’.

And pints are raised for what is, by far, the most popular band of the evening – Perth’s very own Alestorm.

I’m not sure if the River Tay was ever a hotbed of swashbuckling and pillaging but even if not, Alestorm will make you believe it was.

The band romp through a mesmerising 18 song that never lets up in energy and enthusiasm. 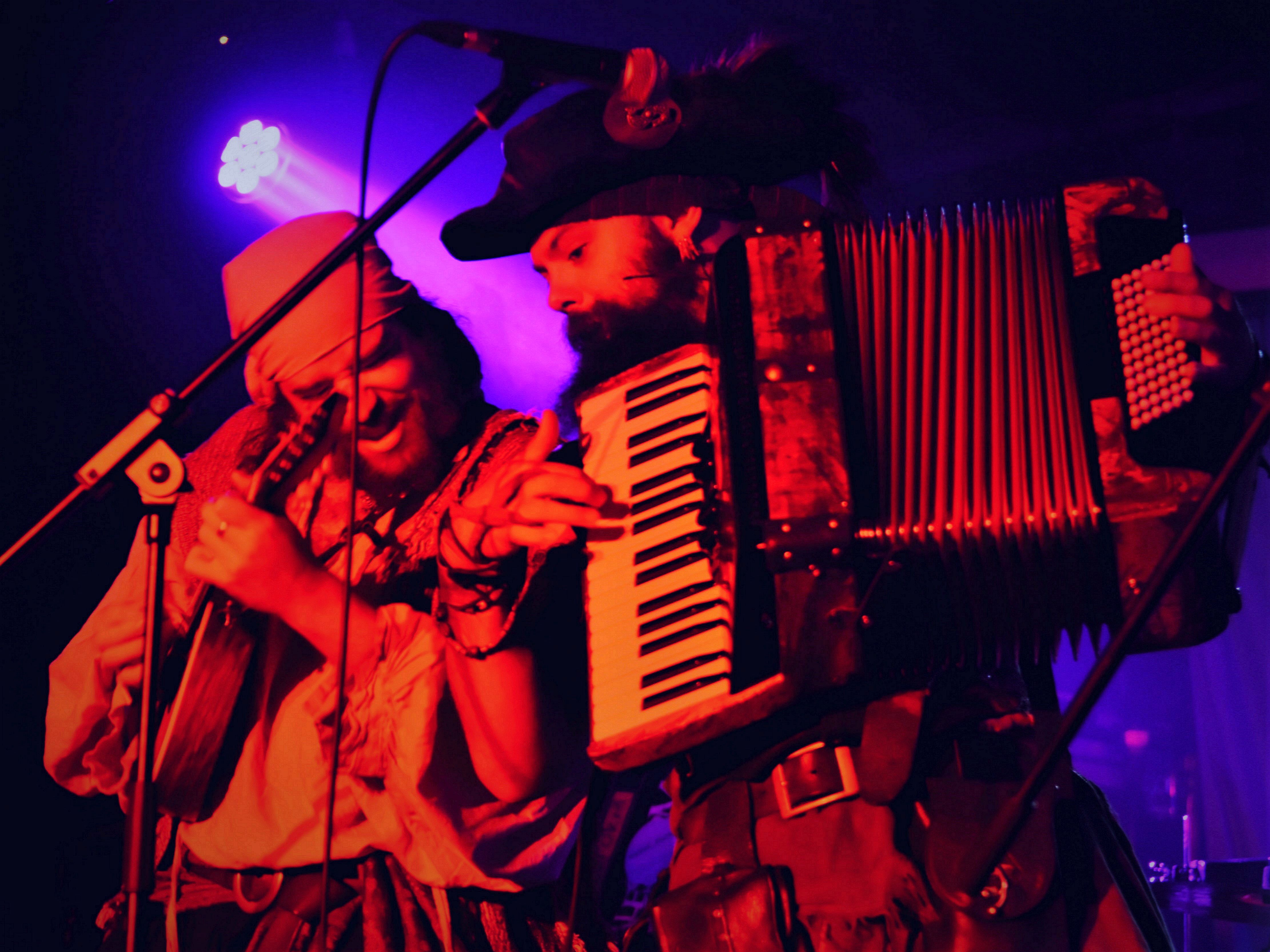 The crowd go wild for them – from opener ‘Keelhauld’ to final encore, the dubiously titled ‘Fucked With an Anchor’ there’s a steady stream of crowd surfers being (keel-?) hauled over the barrier.

Many of them have dressed for the occasion too.

Who ever sells pirate clothing and paraphernalia in the Granite City must have a seen a jump in sales lately, judging by the number of pirate hats on show in the audience.

Alestorm themselves aren’t dressed as pirates – instead there’s a mix and match of styles on show with lead singer Christopher Bowes an arresting sight in Alestorm-branded kilt, baseball cap and a t-shirt bearing the slogan ‘I Got Lost in The Gay Dolphin’. 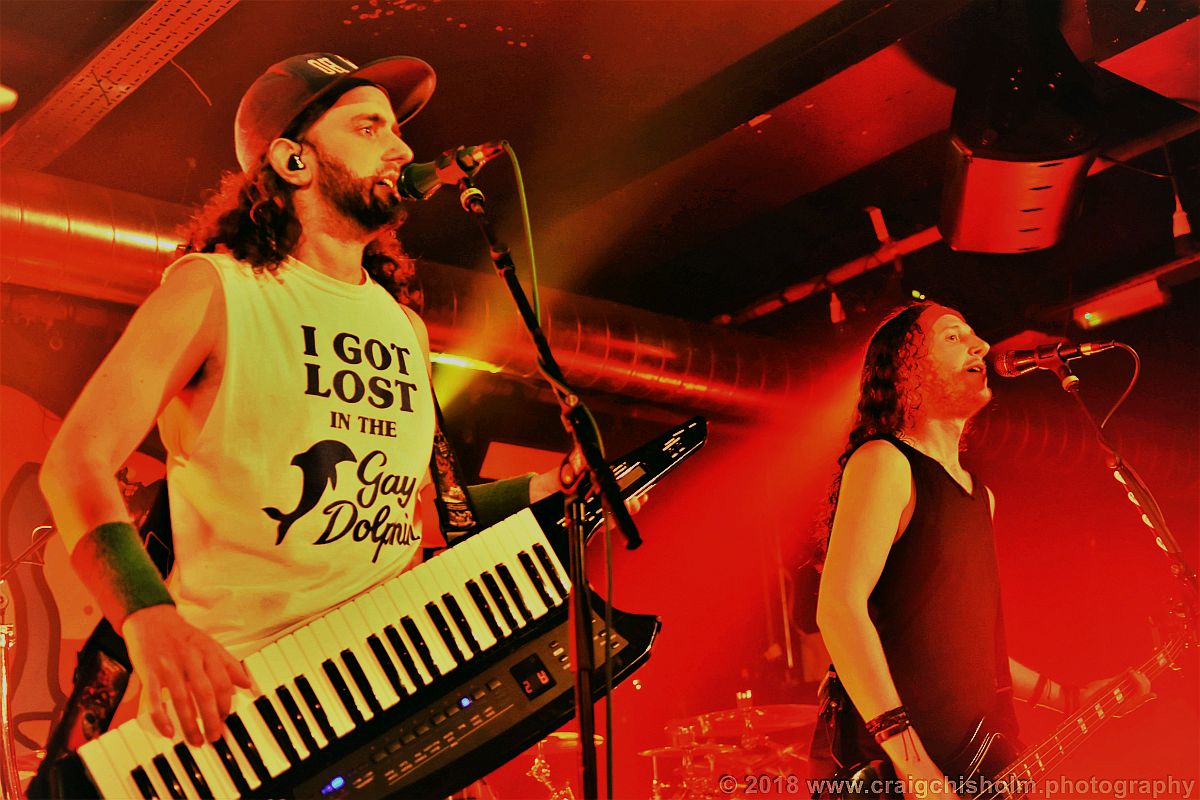 Strangest of all is his instrument of choice – the much-maligned keytar, a keyboard that’s played like a guitar and more associated with 80s soft rock bands than on the high seas.

Visuals aside, the band, lyrically at least, don’t stray far from pirate theme’s – ‘No Grave but the Sea’, ‘Nancy the Tavern Wench’, ‘Pegleg Potion’, ‘Shipwrecked’ and the magnificently named ‘Captain Morgan’s Revenge’ (a song that ticks both pirate and alcohol themes) are given an airing tonight.

Pirate Metal may not be to everyone’s tastes but it’s a triumph tonight as the sold-out crowd testify – it’s safe to say that inhibitions were lost, drinks were raised, and a good time was had by all that attended.