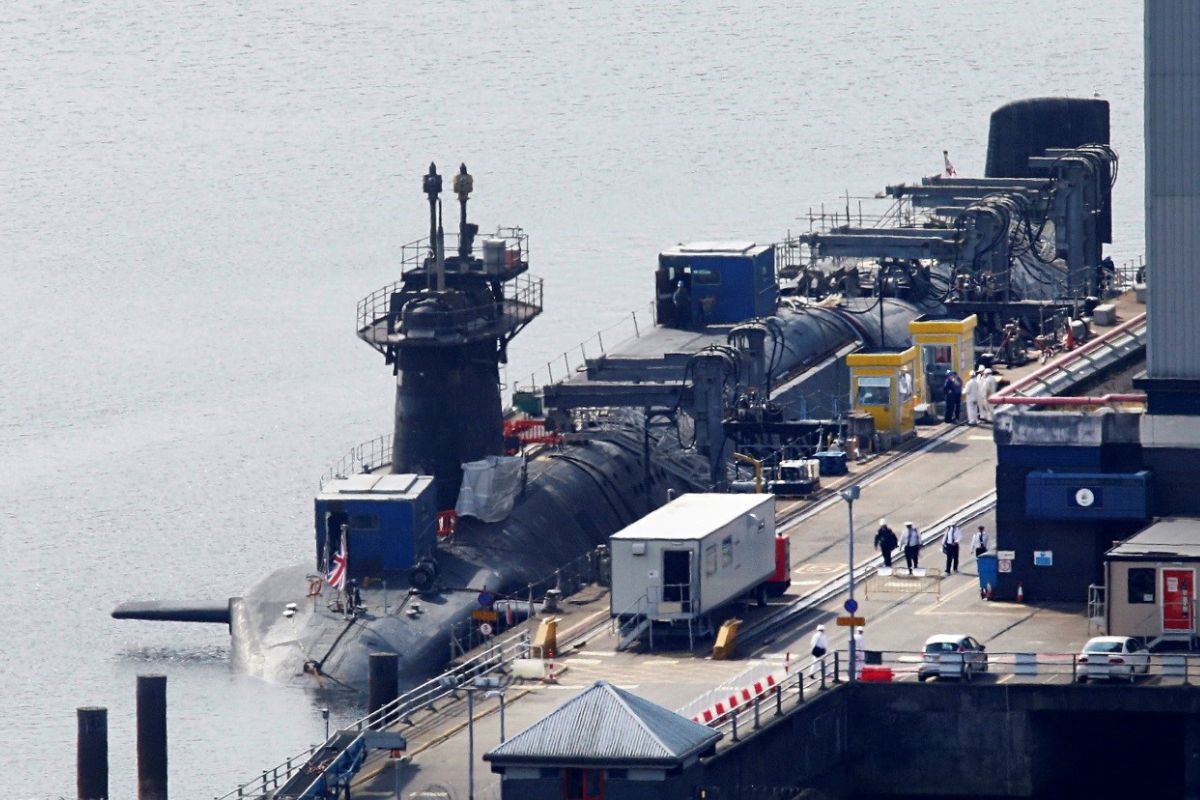 Aberdeen and District CND are organising a vigil outside Faslane nuclear base on Saturday 20th May. There will be a transport going down on the day, leaving at about 8am, for the actual vigil which will take place between 12.30-3pm
The Clyde Naval Base in Faslane, Scotland is home to the UK’s nuclear weapons system, Trident.

Faslane also hosts a number of nuclear-powered attack submarines, known as hunter killers. These submarines carry conventional weapons, and are used to escort Trident submarines on their patrols.

Faslane is only 25 miles from Glasgow and its population of 600,000 people.

Trident warheads are stored at the Royal Naval Arms Depot Coulport, adjacent to Faslane. The warheads are kept in concrete bunkers that have been built into the hillside, and then loaded onto the submarines from a specially built dock.

The warheads are regularly transported to the Atomic Weapons Establishment in Berkshire for maintenance work. A convoy of vehicles escort them from Scotland to the South of England. While the Ministry of Defence claims there is little risk of nuclear detonation during transport, in reality an accident could set off the explosive material being transported. The nuclear weapons convoys often pass close to or even through large towns, endangering the people living there.

If you live in Aberdeen. Aberdeenshire or Moray please get involved

There are several ways of getting to Faslane :

Please let us know on if you want to go by bus or stay at the Peace camp by e-mailing jhamiltonrussell@hotmail.co.uk.

If going by bus we will ask you to make a donation towards costs also if you are staying at the Peace Camp please bring some food, battries or household cleaning goods. 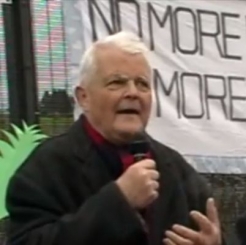 Bruce Kent, Britain’s most well known peace campaigner, will be speaking at meetings on the East Coast of Scotland in early October. Meetings will be taking place in Inverness, Aberdeen, Brechin, and Dundee.

The meeting in Aberdeen is being organised by Aberdeen Campaign for Nuclear Disarmament. It will be held  in Room 10, New Kings at the University of Aberdeen on Tuesday October 3rd at 7.30pm

Described by David Blair in the Daily Telegraph as ‘The most principled and consistent figure in public life’, at 83 Bruce Kent is still one of the most radical people in British politics.

He recently supported the Occupy movement and has been Britain’s most long standing opponent of Nuclear Weapons and war in general.

At a time when the world is sliding into ever more warfare, and the UK  government are intent on renewing our deadly Trident nuclear weapon system, Bruce’s voice is one which urgently needs to be heard.

All welcome to attend.

This is the first of a series of articles for Aberdeen Voice, to be written by members of the Aberdeen and District Campaign for Nuclear Disarmament (CND). These articles are intended to raise awareness of nuclear issues for people in the North-East of Scotland, as a part of CND’s wider campaign against nuclear weapons. These articles will also be going in letter form to Ministers, MP’s, MSP’s, MEP’s, Councillors and other key decision makers. Aberdeen and District CND will also be making suggestions on alternative ways of dealing with regional and global conflict. With thanks to Johnathan Russell. 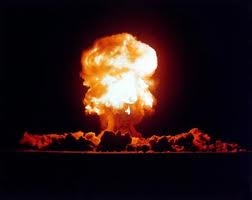 For most of us nuclear weapons have been a part of the world we live in for all of our lives. We can as such often put into the back of our minds just how horrific these weapons would be if used.
As part of the Nuclear Non Proliferation Treaty and the New Start Treaty of December 2010, nearly 50% of these monstrous weapons have been destroyed. This has to be heralded as enormous progress.

This May the UK is participating in the United Nations non proliferation treaty conference in Vienna.

This is an opportunity for the UK Government, rather than to be involved in criticising other countries, to take responsibility itself by putting forward concrete proposals for UK disarmament.

The old arguments of unilateral or multilateral disarmament no longer stand, as the aim of the Non-Proliferation treaty is to stop new weapons being produced and gradually getting rid of the stockpiles that already exist. You could in fact argue that by building a new weapons system we are being unilateralist in going against the non-proliferation treaty.

The question for the UK Government and opposition parties is how active a part we want to play in the process of reducing our nuclear weapons with an eventual aim of having a nuclear free world. The renewal of Trident flies right in the face of the Non-Proliferation Treaty.

The United Kingdom can hardly expect countries like Iran (who are signed up to the Non- Proliferation Treaty) and North Korea (who were signed up to the treaty before President Bush called them one of the axis of evil) to not produce Nuclear Weapons when we intend to do the same ourselves.

We should at least be clearly saying to these countries if you do not produce Nuclear Weapons, neither will we. Or alternatively we could lead by example and not replace Trident which would have a considerable ripple effect.

Michael Portillo, an ex Defence spokesman for the Conservative Party, said on BBC‘s Moral Maze programme recently that Trident is no more than a prestige symbol which would not even be used if any major conflicts were to take place. Yet the Conservative Party, despite some honourable exceptions, are committed to replace Trident.

Of equal concern the Labour Party leadership at both UK and Scottish levels is supportive of the replacement of Trident. This policy continues despite significant public expenditure cuts taking place; and with polls showing that the majority of Labour supporters are opposed to Trident.

The opposition to Trident has always been strong in Scotland with the SNP, Green Party and the majority of Labour MP’S, some Liberals and according to public opinion polls a clear majority of Scottish citizens being opposed to Trident.

However, the countries of the old Soviet Union, (Ukraine, Belarus, and Kazakhstan) have become nuclear free. South Africa has set a great example by unilaterally getting rid of its nuclear weapons. Argentina and Brazil stopped their Nuclear Programmes in the 1980’s.

But failure to act on the comprehensive test ban treaty by leaders in the United States, China, India, Pakistan, Egypt, Israel, France, United Kingdom and North Korea and to cut off production of nuclear weapons materials continues to put the world at risk from continued development of nuclear weapons. There are still 19,500 Nuclear Weapons – enough to destroy our world several times over. Nuclear power stations if hit directly or if they caught fire in a nuclear strike would add to the conflagration.

and yet at a time of severe cuts the UK government is considering renewal of the Trident system at Faslane.

There has been a growth in Nuclear Weapons of a smaller size in India, Pakistan, Israel and North Korea. Under NATO the United States has nuclear weapons in Belgium, Germany, Netherlands and Turkey – in breach, many would say, of the Non Proliferation Treaty. The Middle East, the Indian sub-continent and the Korean peninsula are all areas where the potential for conflict has been heightening at a worrying rate.

Israel is the only nuclear armed country in the Middle East: their arsenal of nuclear bombs, though known about, is not admitted to. A climate is being created in Israel which is very worrying and could lead to airstrikes against Iran, even nuclear ones. In the background to the conflict between North and South Korea is potential conflict between the United States and China along possibly with Russia.

In February there was good news following talks between North Korea and the United States in Beijing with North Korea agreeing to halt uranium enrichment and the testing of long range missiles in return for food aid. This agreement has been rescinded following North Korea’s plan to launch a long range missile in honour of the 100th anniversary of their original leader Kim IL Sung.

The North Koreans say that the rocket is linked to their peaceful advance of their space programme but critics fear that the launch is linked to North Koreas nuclear programme. Both South Korea and Japan have threatened to shoot it down if it enters their territory. The unexpected re-election of the Conservative Saenuri party in South Korea further complicates the situation. 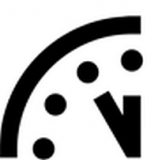 The Bulletin of the Atomic Scientists has recently moved their clock one minute further forward i.e. five minutes to midnight before when they think nuclear war could happen.

One of the main differences between a nuclear and a conventional explosion is that the use of nuclear weapons would be many thousands (and with the largest bombs held by the United States millions of times) more powerful than the largest conventional detonations.

The UK, as with other parts of the western world, is in financial and economic meltdown, and yet at a time of severe cuts the UK government is considering renewal of the Trident system at Faslane. Costs have already increased from £4.5 billion to £12.153 billion, and as with all procurement costs are likely to continue to increase. The BASIC Trident Commission supported by a independent cross party group of MPs suggests that cancelling Trident would save £83.5 billion between 2016-2062.

There will be forthcoming articles in Aberdeen Voice on the economic costs of retaining or getting rid of Trident.

The referendum about whether the people of Scotland want to stay in the UK or become an Independent nation has raised a major conundrum in that the SNP have pledged to get rid of Trident in Scottish waters and there are no other obvious bases for Trident in other parts of the UK. The Trident issue will be a major issue in the Independence debate which is starting to take place, and we will be aiming to raise our viewpoint at every opportunity. 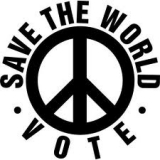 Opinion poll after opinion poll has indicated that a clear majority of people in Scotland want to see the end of Trident.

If the UK gave up its Nuclear weapons we believe this would have a considerable knock- on effect, helping to rid the world of these monstrous weapons.

We need to make this happen.