Long established bead and craft store Bead Crazy is re-launching as Bead POP where new owner Alex Penter is offering a weekend of fun activities to celebrate the opening. 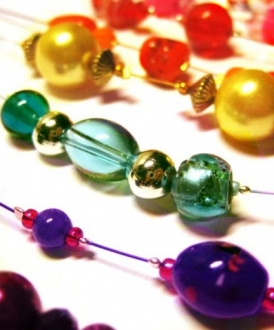 A new craft experience is opening in Aberdeen this weekend as the bead and jewellery making supplies shop formerly known as Bead Crazy is re-launched as the all new Bead POP with a weekend of fun events that will include special offers, new products and complimentary drinks.

The fun starts at the St Andrew’s Street shop on Friday with a special late-night opening, from 7pm until 10pm, when customers can view and purchase from a range of new products and ask any craft-related questions they have, while enjoying a complimentary cocktail.

On Saturday there will be a classic tea party, complete with tasty treats and goody bags for the lucky first 10 people through the door.  So get along early!

The fun continues on Sunday with the first of Bead Pop’s new regular Sunday openings, from 12 noon – 4pm, when there will be a last chance to get a 10% off flyer, valid for two weeks, with a £10 purchase.

New owner Alex Penter, who studied design at the Robert Gordon University and was the previous shop supervisor of Bead Crazy before she recently bought the business, said:

“Even if you’ve never tried any sort of jewellery making before, I’d encourage you to come along and try something out.  We run activities for people of all abilities and you might surprise yourself by how creative you can be!

“This opening weekend is a great opportunity for people to come down, have some fun and check out the new look shop.  And, for our long established customers, I think they’ll be pleasantly surprised at the amount of new and unusual beads we’re now stocking.”

In addition, Bead Pop runs classes on designing and making all kinds of unique handmade jewellery, with staff being available to attend events at schools and charity fundraisers.

The shop is based at 19 – 21 St Andrews Street, Aberdeen and is open from 10pm until 5pm, Monday to Saturday and 12 noon until 4pm on Sundays.

For workshop bookings or any further information on what the shop can offer call 01224 630011. 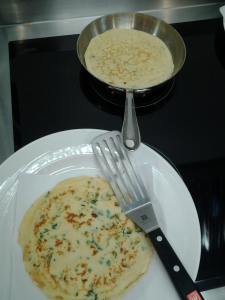 Some months back I had a chance to take a full day course at the Nick Nairn Cookery School, but I never got my schedule straightened out in time to sign up.

I am not the most easily pleased person, but I can truly say this course was everything it should have been – instructive, enjoyable, hands-on, perfectly structured, and the results were delicious.

I already knew how to make crepes decently – so I thought.  Louise’s techniques (different and clearly superior to my usual style) were demonstrated with enthusiasm and clarity.

We were all flipping crepes and turning out beautiful, perfect golden specimens by the time Louise was done with us.  The other students were clearly having fun, and one woman was profusely thanking her friend for taking her there as a gift.  And that was even before we tasted our handiwork.  The immaculate, state-of-the-art cooking area and dining bar were a joy to work and eat in.

The savoury crepe we were making was to be filled with a smoked haddock and cheddar sauce with herbs.  I decided to taste some of the herbs before adding – and I’ve never had better except perhaps from my garden.  Louise explained what to avoid when buying smoked haddock (ie artificially coloured fish which often has other additives) – what we had ingredient-wise was the best you’d be able to get – I wish I could remember where in Scotland the cheddar was from.

As we sat down to eat the crepes we’d created (garnished with rocket), Louise demonstrated how to do Crepe Suzette.  This dish may be retro to some, but I personally love it, and it is apparently gaining in popularity. 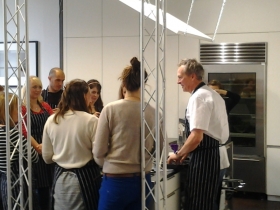 There was no time for us to make the dish ourselves – but with the skills we had learned and what was demonstrated, we will all be able to replicate it at home. Suffice it to say that the Crepe Suzette she served the students was better than any I’d ever made, or that I’d ever been served.  (I make my own variation which I call ‘Crepe Suzanne’ with Jack Daniel’s – and I’ll be trying that very soon with my new skills).
I’d learnt a better way to cut and dice, a faster and more successful way to make white sauce, and I’ve taken away a dozen other hints and tips.

Don’t bother trying to get on the next crepe course – it’s already sold out.  But whatever your level of cooking or your specific culinary interest, there is a course for you.  I’ll be on the next full day Nick Nairn course I can get on.

Eleven out of ten.  This is a win for Aberdeen, and I wish the school every success. 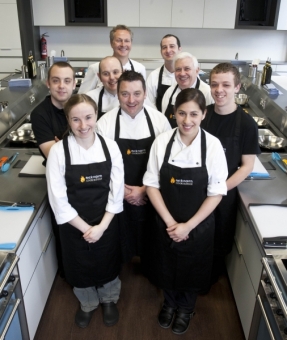 Nick Nairn’s long-awaited Aberdeen Cook School, which opened its doors on 9th May, caters to a demand from would-be cooks from across the country.  The £500,000 project is providing further jobs and a tourism boost to the north-east of Scotland.
The new Aberdeen Cook School has been a passionate desire of Nick’s for several years and is located in a stunning listed building – formerly St Nicholas Kirk’s old church hall in the city centre – which has been transformed into two separate state-of-the-art foodie havens.

Work on the building has been carefully designed to enhance original features such as the carved mouldings and stained glass windows, alongside striking stainless steel and white kitchen areas, designed by Kitchens International.

The new cook school follows on from the success of the Nick Nairn Cook School in Port of Menteith, near Stirling, and Nick explains:

“We have a disproportionate number of people coming to our existing school from the north-east, so an Aberdeen school seemed a natural progression.  Also, the north-east is a farming community and some of the finest produce comes from here.

We have found that cooking enthusiasts from this area are passionate about developing their skills and particularly enjoy entertaining at home.  They can commit time to learning due to their working patterns and disposable incomes.”

Nick will also be trialling a brand new venture in the new cook school, with after-work and lunchtime classes at its Quick Cook Bar.  This is a new urban concept where participants can cook, learn and eat in two hours, picking up invaluable tuition from basic knife skills to creating culinary masterpieces.

“ It will be perfect for people who work during the day.  You can pop in after work or do it over a long lunch-break.  It’s also an affordable place for students to come along and learn to cook for themselves.” 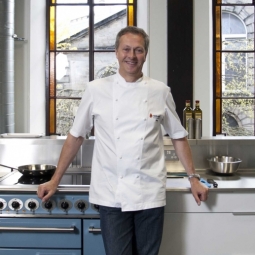 Head chef Kenny Smart, who joins from the prestigious 1906 restaurant at His Majesty’s Theatre in Aberdeen, will run the large teaching kitchen upstairs.  The Quick Cook Bar area downstairs will be overseen by Louise Chapman, previously restaurant co-ordinator for the hugely successful Taste Festivals.

Nick will also teach classes on dedicated days, as well as the cook school’s established chef John Webber.  John brings more than three decades of knowledge and experience, having trained with Anton Eddelman and Anton Mossiman before being awarded his own Michelin accolades in the country house hotels he previously worked in prior to joining forces with Nick twelve years ago.

While full-day classes for 24 people will be held upstairs at the Aberdeen Cook School, the ground floor level will also feature a cook shop, selling essential kitchen kit from a £5 heatproof spatula to a £3,000 Falcon range cooker – and gadgets that gather absolutely no dust.

Aberdeen classes start from Sunday 20th May and can be booked now via www.nicknairncookschool.com or by calling 01877 389 900.