Tally Ho! instead of the usual news round up, diary, and definitions, I wanted to cheer everyone up with a little fairy tale. Definitions and normal services to resume shortly. By Suzanne Kelly.

There once was a beautiful princess; all around her marvelled at her great beauty. Was she as kind, good and honest as her looks implied? Alas! Not so much.

Proud of her great beauty, she entered a beauty pageant to find the fairest face in the land, and naturally, she won, for she was the most beautiful maid in all the highlands. The fame this brought her went straight to her head.

A rich and powerful tyrant saw her beauty and decided she might be of use to him. One of his sons had heard of her great beauty too, and said “Dad can you get me one of those?”

Now all the kingdoms of the earth knew the tyrant loved and coveted money, but he also loved the thing he could not buy – beauty. Cursed (by many), he had about him the look and manners of an angry, podgy, balding ogre. In hushed tones the people hinted that he was indeed descended from an ogress. A long, long time ago, he married a beautiful woman, but as she aged, he cast her off.

He then married a younger, prettier maiden, and when she too aged, he likewise cast her out, only to marry a younger maiden still. (His children were thought of as being part ogre as well; their lusts for shooting the rare wild beasts was unbridled and terrifying to see). Thus, the tyrant had serious image problems, and something had to be done.

“Come and work for me,” the tyrant wrote to the princess; “It does not matter that you have no work experience, I could still find your talents very useful indeed.” He whisked her off to his far away kingdom, where in his palace of pink marble he plied her with gold and jewels. She was truly enchanted, for the thing she loved nearly as much as her dear face was wealth.

And so the princess went to work for the tyrant.

The tyrant was most pleased, and thought to himself:

“As the princess is loved – not only by the townsfolk, but also by a local storyteller prince, so shall these facts benefit my purse as I build my empire. With her in the mix, I am verily quids in.”

Now the princess knew all about the tyrant, but the lure of a job which would give her money to buy pretty things proved too strong to resist. She did like shiny, new pretty things.  She also had found a new love in the arms of the handsome storyteller prince.

unbeknownst to her, a small wrinkle appeared on her perfect brow

Now her storyteller prince had previously found love as she herself had, but alas, things change. The prince found the lustre had worn off his old bride, and seeing the lovely princess, he cast off his wife. For the beautiful princess and her prince to be joined, she had to do a bit of casting off as well, and she sent her ex a packin’.

Fearing the peasants would think her less lovely, she wed her storyteller prince in secret, for her handsome prince was none other than the very storyteller who the tyrant wanted to sing his praises. This was some coincidence indeedy.

“Alas – the people who now love me for my great beauty and modesty might not understand my marrying my prince. They might – wrongly of course – think that we are in it for the money, and his storytelling skills, so useful to my tyrant benefactor combined with my earnings  from the tyrant are bang out of order.”

As she worried for a second, unbeknownst to her, a small wrinkle appeared on her perfect brow.

She worked hard to keep her lovely looks; she consulted a wizard, who made odd potions out of deadly botchulism poison, and administered these to the fair princess’ face. She had mud wraps and beauty treatments. All was well with her world.

All was not so well where the tyrant king was building.

At his bidding, the lovely princess had the trees and plants swept aside. The animals were chased out of their homes (if they were lucky), and a great course of golf was laid on the seashore. The older folks shook their heads in dismay and disbelief. Those people who lived close to this course of golf were treated poorly as well.

Warlocks disguised as house-hunters appeared on the peasant’s cottage doors, asking to buy their homes for a pittance. The tyrant’s men hounded and persecuted them, halting the resident peasants as they went about their business. A , honest storyteller visiting the peasants was clapped in irons and thrown in a dungeon – all at the say-so of the tyrant’s forces.

Walls of earth were built around the poor cottager-dwellers’ homes.

The only happy people were those who sought to suck up to the tyrant, and verily the princess was first in the line of these.

“Tear down that house on the hill, for it is ugly!” he roared

Whether she was too self-involved to care about the animals and people, or whether she was too thick to know what the cruel realities of the course of golf were was the subject of debate in the taverns. Either way, the princess was not coming out of it in a good light at all. But she was oblivious.

The princess found herself happy and contented. She had her shiny things, and pretty clothes. She had her new clubhouse by the sea too, where she reigned. But somehow – it all seemed temporary.

One day the tyrant came to ask her to do some work.

“Tear down that house on the hill, for it is ugly!” he roared. “Build a wall of earth so I need not look at that ugly peasant’s cottage when I am here by the sea! he decreed!

Verily, even the muted colours of the shore, sand and gentle grasses and plants were not to his liking.

“Paint each blade of grass a turquoise blue, for that pleases my eye more than the colour that Mother Nature has given them.”

The princess dutifully obeyed –some say she obeyed with a bit too much pleasure.

The trees were planted. Alas! They could not thrive in sand, as any fool knows. But the princess merely saw their ageing, ill condition and had the woodsman cut them down, and replace them with new ones.

Mother Nature had watched all of these activities with waxing wrath. And she wasn’t having it:

“As you have profited from the ageing of another maiden, as you have treated the peasants, the landscape and even these poor trees, which never had a chance to live – all for your own profit and vanity, so it shall be with you one of these days, you b”£$(UT 2!”

Mother Nature was well and truly pissed off.

Verily, the towns folk did talk amongst themselves:

“Is she really the fairest in the land if she is fair of face, but not of deed?”

They asked such questions in whispers. Then one day it came to pass that the jig was up.

Despite marrying in secret, the story was now out – and all the folk knew the princess married the very man who could keep the tyrant sweet, and whose stories the tyrant relied on to boost his ego and profits, which of course helped keep the princess on a nice little earner too.

The ugly tyrant would visit now and then. One such day he said to the princess: 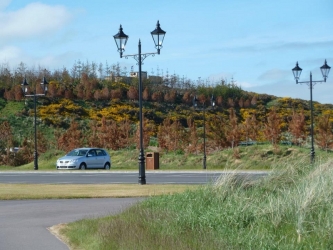 There was just a touch more harshness in the tyrant’s voice than usual. Smiling outwardly to the tyrant, the princess heaved a sigh as he finally flew away on his great silver jet.

When he left, a twitch struck her eye, and the wrinkle on her fair brow appeared once more. Despite several layers of St Tropez tanning spray, she seemed somehow pale.

As time passed, the storyteller prince started going to balls without the princess; he started to work a little later at the office.

Came the day the princess was buying more designer clothes. “Madame will need another size up, I fear”, said the shopkeeper “but don’t worry, this designer just cuts the sizes very small”, the shopkeeper lied, fingers crossed behind her back.

As the princess looked at her reflection in the glass, she paused for a moment. Was that a shadow or a wrinkle on her brow? Was that extra build of up tanning spray under her eyes, or dark circles? Was that a touch of silver in her hair peeping through? Had the lines on her lovely throat deepened? “I’ll need a fortnight at Champney’s at least”, the worried princess thought.

For a second, she thought – which in itself was notable.

She thought of the scores and scores of trees she ordered planted, knowing they would not live, and after drying in the hostile climate would be thrown aside, their lives inconsequential. All these had to be replaced or hidden to hide their lack of beauty and youth.

The thought never reached a conclusion, for her mobile phone had started to ring. She could see it was the tyrant calling her. She took another look at her reflection.

She was not smiling now.