When a stone wall in Wellington Brae started to crumble, Aberdeen City Council decided to arrange the repair work.

Rather than identifying the property owner and troubling them with a repairs notice, the cash-strapped city mysteriously decided to look to its own maintenance budget, and decided somehow that there were no funds.

Did those involved approach anyone connected with Finance to ask for emergency funding? Apparently not. Did they decide to determine who owned the land at that point and issue a repairs notice? Suzanne Kelly presents part one of a two part investigation. 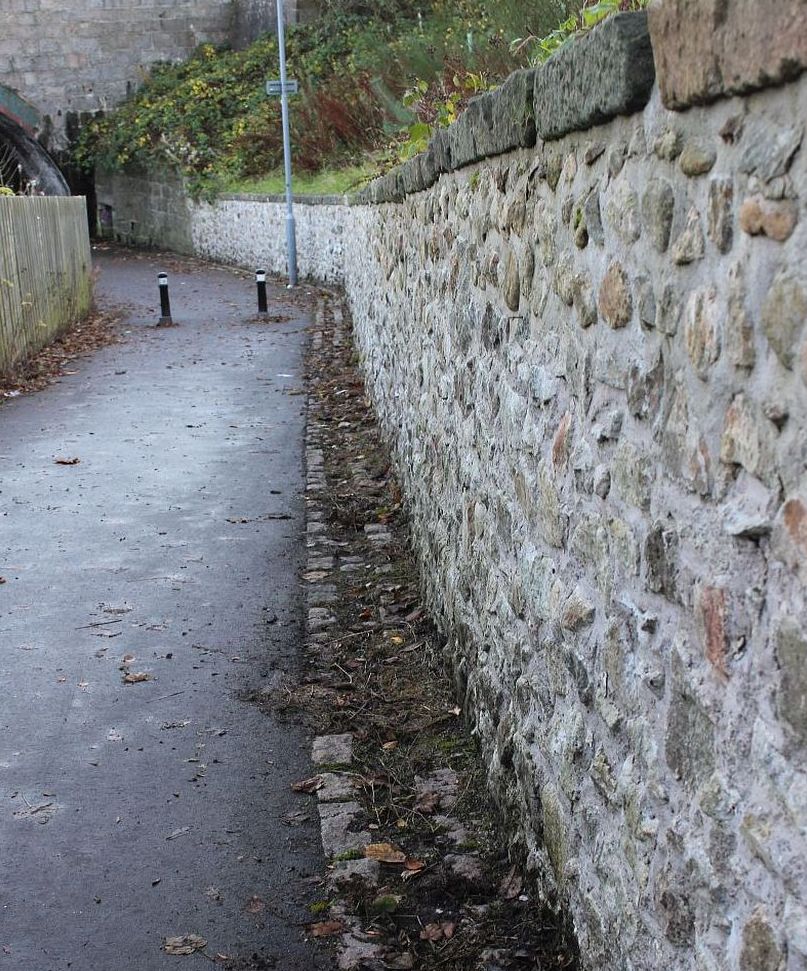 As many Aberdeen homeowners can attest (including the writer), even a few slates falling off a roof or a damaged front garden wall can result in a warning letter from the city that repairs must be done.

The wall in question sat on privately-owned land and the stone wall collapse spilled over onto Wellington Brae cycle path: all the more reason why, some might think, a repairs notice should have been swiftly sent to the owners, who should have been identifiable from the Land Registry records.

This is the origin of ‘Wallgate’, a tale of council procedures being ignored, a simple matter of land ownership being hopelessly (unnecessarily) confused, leaked emails and more.

ACC officers first tried to identify and contact the property owners AFTER the money was sought from SUSTRANS the cycling/walking charity, on 3 February 2016.

Why didn’t ACC do what they have often done – identify the owners and hit them with a repairs notice?

The email author asserted that the cause of the wall crumbling was Storm Gertrude; others claim that the wall was in bad repair before then (Aberdeen Voice will try to find out whether any repair notices were served on the property, or whether any complaints had been made prior to the storm).

The city’s version of events can be found in this FOI (heavily redacted) and with comments in the Appendix to this two-part article.

For reasons hard to fathom, ‘Wall I Am’ was uncertain who owned the wall despite telling the press on 3 May 2017 he had sold property at Wellington Brae to his father in 1992, and despite apparently giving verbal permission for the repairs.

All will become clear – or not – shortly.

Whose Wall is It Anyway? – A time line.

Mr Young is adamant that he acted properly throughout. Would a lawyer and Councillor acting as Finance Chief/convener be expected to know whether or not he owns a property – or to act swiftly to find out whether he did if asked for permission to do with it?

If you sold your father land, would it slip your mind?

Here is a partial timeline showing dates of statements, sources, and who is apparently being treated as the landowner.

Much of this information has been published before, such as the leaked emails, but assembling this timeline illustrates how problematic all the conflicting ownership claims are, and the issues arising.

“As the FOI (the most recent answered by ACC) shows the officer moved forward with discussions with SUSTRANS without involving Councillors.”

AV accepts this: what we have been questioning is who owned the land, why ACC was not pursuing the land owner to pay for the repairs, why Young was uncertain whether or not he owned land, and why he was being contacted as a private landowner (mistakenly or not) via his official ACC councillor email rather than a private one.