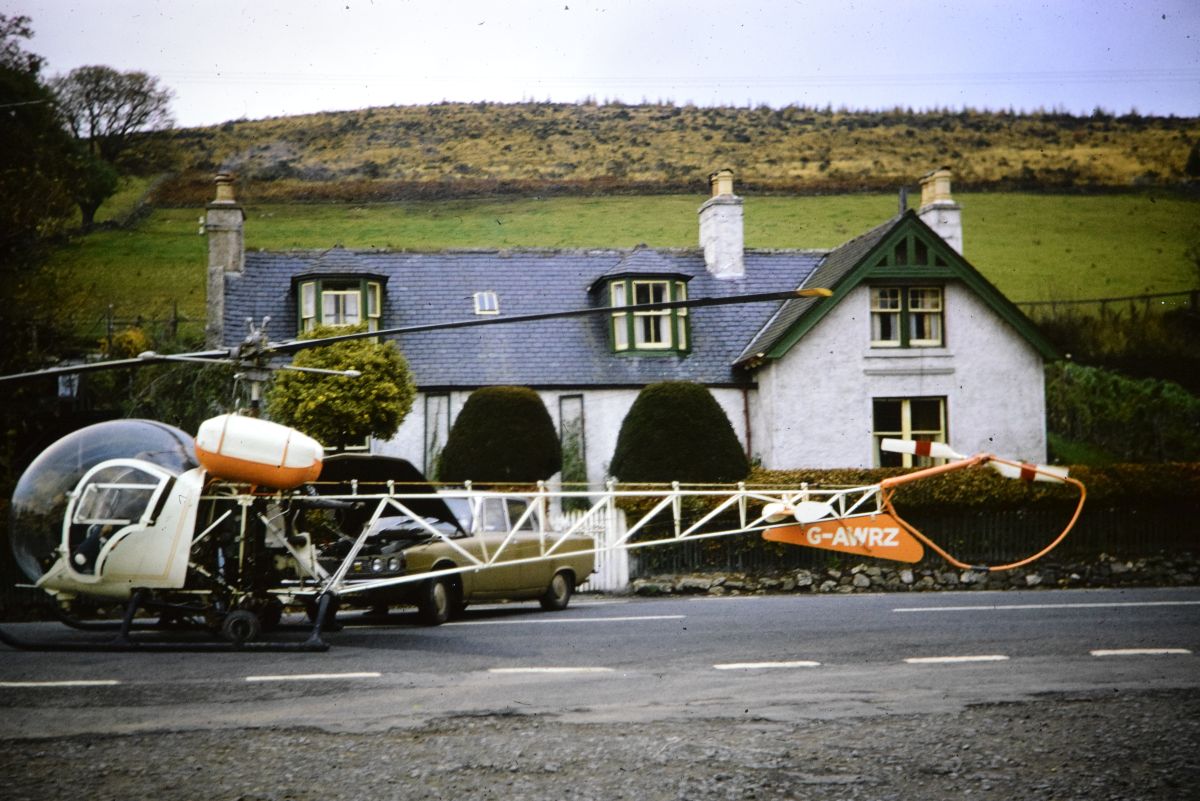 The Bell Type 47G helicopter apparently being jump started by a car in Bellabeg, Strathdon, Aberdeenshire

The story behind a mysterious photograph unearthed last year has finally been uncovered as an Aberdeenshire community prepares to stage its annual Highland Games.
Amongst a bundle of old slides donated to the organisers of the Lonach Highland Gathering and Games was an intriguing picture of a helicopter apparently being jump started by a car on the A944, the main road through the village of Bellabeg where the gathering is held.

Now months after calling for the public’s help and having explored a number of leads, the tale of the baffling picture has been revealed.

And a member of the Lonach Highland and Friendly Society was the person who held the answers to Strathdon’s curious chopper case.

In 1974, James McIntosh, who was brought up in Strathdon and runs The Lecht Ski Centre, was working for Sunningdale-based Yellow Bird Air Services which owned the Bell 47G-5 helicopter.

The firm was contracted to spread fertiliser on young trees on the Isle of Mull and as the helicopter was due a service, James and American pilot Don Ambabo decided to head to Strathdon for the weekend and carry out the service there, before they flew to Mull.

Assisted by the local policeman, who held up the traffic, the pair landed on the road on the Friday evening before wheeling the helicopter to the cover of the local garage.  Over the weekend, James and Don serviced and washed down the helicopter with the help of fellow Lonach Highlander Archibald Stuart.  When they manoeuvred it back out on Monday morning for take-off, things didn’t quite go to plan.

“We wheeled the chopper out onto the road and went to fire up the engine and there was nothing.  It was a piston driven engine which can sometimes be difficult to start, especially after being hosed down and cleaned.  Knowing that the local bus and other folks would be needing past soon we had to act quickly.

“As the battery on the helicopter is fairly small a car can jump start it, so I hijacked my father Gibbie’s Rover.  The road was at a standstill for about 10 minutes while we got the helicopter off the ground.  There were a few bemused drivers and some of the locals were peering out their doors to watch proceedings.  It’s not every day a helicopter uses the main road through Strathdon as a helipad.

“After a brief stop in the Lonach games field, Don and I headed for Mull where we spent about four months spreading fertiliser.  The helicopter was also used for crop spraying in other parts of the UK and we had many great flights.  I don’t think we ever caused the same commotion as when we landed in Bellabeg.”

This Saturday will see a different spectacle take-off along the A944 in Strathdon when around 170 Lonach Highlanders undertake their annual six-mile march to the Lonach Highland Gathering and Games.

Setting off at 8am, the men will visit a number of local properties to toast the health of their owners and the local area, continuing a near 200-year-old tradition. The Highlanders’ arrival onto the games field at one o’clock heralds the official opening of the Highland Games.

It’s a route that James has trod many times, having taken part in the march for 51 years as a drummer in the Lonach Pipe Band.  He first marched aged nine, before joining the Lonach Society at 16, eventually hanging up his drumsticks in recent years.

Forty years ago, after a spell in the Fleet Air Arm and flying helicopters privately, James set up The Lecht Ski Centre alongside Pieter du Pon, Ronnie Winram and Professor Jim Petrie.  Since its founding in 1977, the centre has grown to become one of Scotland’s main ski centres and a year-round activities destination.

“It is brilliant to be able to discover the story behind the photograph, as it certainly had us scratching our heads when we found it.  Being confronted with around 200 men in kilts carrying pikes isn’t unusual on the road in Bellabeg, but a helicopter certainly would have been.

“Stories and unusual events such as this are part of the fabric of our communities and it is important that we record them where we can.”