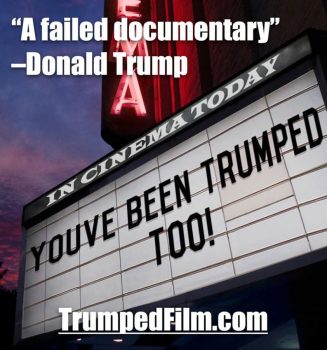 Donald Trump is using legal threats to prevent a new documentary from reaching American voters – according to the producers of ‘You’ve Been Trumped Too’, which opened in New York on Friday and began in UK cinemas this week.

You’ve Been Trumped Too contains footage showing Donald Trump wanting to ‘get rid’ of houses and building Mexico border style walls around homes in Scotland.

It also explores the 5-year long saga of a 92-year-old widow who went without proper water supply for half a decade after having it cut off by Trump workers.

But the Trump Organization has issued a legal challenge threatening to sue if anyone dares show the film, and is pledging to take a frail pensioner to court over claims made in the film.

Montrose Pictures, a small Scottish based company, has completed a successful Kickstarter campaign – attracting more than thousand backers, aimed at bringing the film to as many American voters as possible ahead of the election through a digital or TV platform.

“Mr Trump tried the same approach with the BBC back in 2012.  But the corporation aired YOU’VE BEEN TRUMPED anyway, to widespread critical acclaim. We’re now looking for an American broadcaster or streaming platform willing to get the truth out there.  According to the critics, this is a film all Americans need to see.”

The film been called ‘a ticking timebomb’ by Indiewire, ‘laced with enough maddening new material for it to feel like a valuable addition to the most hollow house of cards in the history of American politic.’  The New York Times said the film was ‘timely’ and added:

“this time the “you” in the title is the United States.“

“the movie raises a valid question…how would Trump, if elected, treat the American people?”