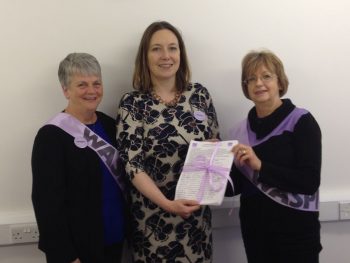 Women Against State Pension Inequality Campaigners in the North east have welcomed support from Banff & Buchan MP Eilidh Whiteford, following a recent meeting at her constituency office in Peterhead.

The UK Government has accelerated the process of equalisation of pension ages for men and women, which means that women born in the 1950s have lost thousands in pensions payments without having sufficient time to plan for the changes.

Hundreds of women in the local area are affected by the most recent changes, on top of the pension age increase of 1995.

SNP MPs have repeatedly raised the issue in Parliament, and have met with WASPI campaigners at Westminster to demonstrate support.

“We have no problem with equalisation of the state pension age, but we do feel we should have been informed in 1995 when that momentous change came in.

“Anybody affected should get in touch. We have a local group which people can contact for information.”

“The women of WASPI have my full, unequivocal support, and the UK Government really should reconsider this ill-thought out policy.

“Nobody doubts that there are challenges associated with an ageing population. For women born in the 1950s, however, the fact that the pension age has now risen twice is deeply unfair.

“The UK Government should have phased these changes in gradually, without punishing one particular age cohort. That’s why I am pleased to support WASPI’s calls for fair, equitable treatment.

“There are far fairer ways to address the challenges of an ageing population.”