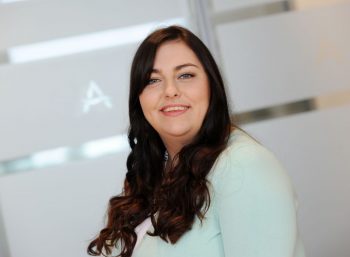 Aberdonian Sophie Ewen (20), who began her career as an apprentice, has been nominated as Apprentice Ambassador of the Year in the 2016 Scottish Apprenticeship Awards.

Sophie, who completed her business and administration modern apprenticeship with Aberdeen Asset Management, is now the firm’s graduate programme co-ordinator.

The awards, which are organised by Skills Development Scotland will be announced at The National Museum of Scotland in Edinburgh on 3 November.

The awards aim to showcase excellent apprentices who deserve recognition for their hard work as well as employers who are committed to the apprenticeship programme.

Sophie, who is a former pupil at the city’s St Machar Academy, was one of the first apprentices recruited by Aberdeen Asset Management in 2012 when the apprenticeship programme was introduced to complement the company’s existing intern and graduate programmes.

As well as studying for her Highers and Advanced Highers, Sophie was an active participant in the school’s extracurricular groups as well as being on the school’s charity committee and involved with the equal opportunities group.

Initially considering applying for a University course, Sophie was attracted to the business and administration modern apprenticeship as a way to join a large global company where she could earn while she learned and gain valuable working experience.  Through the structured rotation programme between different departments, Sophie quickly realised that HR was the perfect fit for her.

On completion of her apprenticeship, Sophie remained in the HR team where she helps in the co-ordination of Aberdeen Asset Management’s talent programme including apprenticeships, investment trainees, interns and graduates. Sophie also runs employability workshops for school leavers, mentors young people to help them get job-ready and finds time to volunteer with a number of training related charities.

Aberdeen supported Sophie to complete her investment operations qualification and she is currently working towards an HR chartership.

“Sophie clearly has all the attributes and skills needed to be an Apprentice Ambassador of the Year. With her ambition and initiative she is a popular member of the Aberdeen team and never fails to help colleagues. Just like Sophie, we’ve found all our apprentices to be keen, motivated individuals who are committed to on-the-job training and learning.

“By rotating to different departments, our apprentices learn a wide range of skills and develop knowledge that will stand them in good stead for the future, while gaining a feel for the business and finding out which area best suits them and their skills and interests. We will all be cheering on Sophie in November when the winners are announced.”

The Aberdeen Asset Management programme for apprenticeships which will start in September 2017 will open in February 2017. The apprenticeship runs for 12 to 24 months and apprentices rotate to different teams every four months to give a well-rounded view of the asset management industry and its related functions.

The rotational aspect of the programme helps apprentices learn about the organisation, meet the people involved and help them decide which area of the business to begin their career in. As well as learning on the job, Aberdeen provides apprentices with an extensive induction, access to training courses and qualifications during their apprenticeship. More can be found at http://graduates.aberdeen-asset.com/en/graduates/apprenticeships.