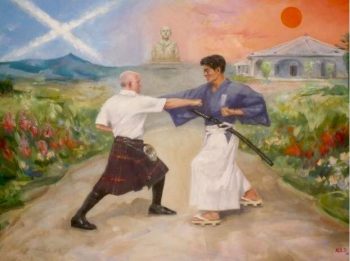 Aberdeen’s famous Karate man Ronnie Watt (9th Dan) will be flying off to Japan on Frday (Oct 7) at the invitation of the Japanese through a fellow martial artist. A Kendo instructor from Japan, Kazuo Yamazaki, who is well known in Aberdeen for setting up the Aberdeen Kendo Club a number of years ago, has invited Ronnie and his wife Gail to accompany him on a tour of Japan.

The highlight of the tour for Ronnie will be visiting the Karate Dojo’s where they have organised displays of three of the traditional Japanese karate styles.

They will also visit Nagasaki where they have been invited by Tomishisa Taue, the Mayor of Nagasaki and some of the most prominent Karate Masters in their area to attend a dinner in his honour.

Ronnie is no stranger to Japan having visited six times to date and training in the world famous Takushoku Dojo, where modern Shotokan Karate was brought to the world by the Japan Karate Association.

Ronnie’s connections with Japan go back a long way. When he started Karate 50 years ago, after being inspired by James Bond movies, very little was known about Karate in Scotland. Few people knew anything other than simple basics and even that was of a questionable standard. The only way to learn was to go to Japan or attend some courses the Japanese masters were running down at Crystal Palace in London. Ronnie did both.

After years of training with the visiting Japanese instructors and visiting the source of knowledge in Japan Ronnie became well known as an instructor and an international competitor. Leading the Scottish Karate team and Teaching over 20,000 people karate.

In his Karate career Ronnie has brought many Japanese Instructors to the UK, Germany and Norway. He became good friends with many legendary karate masters such as Nakayama, Kase, Shirai, Enoeda and Ochi. Many would stay at his home in Aberdeen. Ronnie brought a team over from Japan to compete in a friendship tournament and in 2001 organised the WKC World Karate Championships at the Aberdeen Exhibition and conference centre.

His work with the Japanese and the good work Ronnie has contributed to Karate, not only in the UK but in many countries he visits to teach Karate, has not gone unrecognised.

Ronnie is one of the few people to be honoured by the Japanese outside of Japan, with an Order of the Rising Sun – an award not to be taken lightly. He has also since been recognised by the Queen with an OBE and named ‘Sports personality of the year’ by Aberdeen City Council.

the Scottish Samurai Awards have grown into something really special

He also has honours from the government of Slovakia and from other Karate Clubs in Europe. Last year he was entered into the ‘European Hall of Fame for Martial Artists’.

In 2015, in tribute to ‘Scottish Samurai’, Thomas Blake Glover, Ronnie helped to organise the hosting of 22 Japanese students and school children who were doing a pilgrimage visit from Kagoshima to Aberdeen and London. After his arrival in Japan, Glover had sent 22 students to be educated in the ‘modern world’ and is credited with modernising Japan. Glover is also credited with reviving The Order of the Rising Sun.

During the student’s tour of Aberdeen and London, Aberdeen was very proud to be able to host every person with a family including Ronnie and some of his friends. Ronnie is looking forward to seeing some of Kagoshima on his visit. Ronnie was recently awarded his 9th Dan making him one of the highest graded Karateka in the world and one of the worlds most experienced.

As if all this wasn’t already enough to keep him busy, 22 years ago Ronnie Founded a small awards event to help recognise and encourage people in different aspects of life. Initially it was centred round sports but now the Scottish Samurai Awards have grown into something really special. Each year they have grown into a more prestigious date in the Aberdeen social event calendar.