The Cheviot, the Stag and the Black, Black Oil – at His Majesty’s Theatre Aberdeen. Duncan Harley reviews. 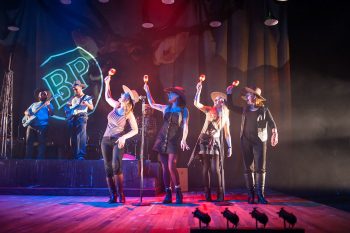 Performed by the Dundee Rep Ensemble as a Highland Ceilidh, Cheviot has been brought bang up to date.

Written by the late John McGrath, The Cheviot, the Stag and the Black, Black Oil tells the story of forced economic change in the Highlands.
First performed by 7:84 Theatre Company in 1973, the Ceilidh play pointedly compares the sheer brutality of the landowning capitalists of the Clearances to the often callous exploitation of Scotland by the predatory capitalists behind the oil boom.

The Establishment was seemingly not much impressed with the original production, and sheafs of appalled letters were written to The Scotsman. The general reaction ranged from deep hostility from supporters of global capitalism, to a feeling of empowerment amongst nationalists who, despite the extreme Socialist views expressed in the play, sensed that an unlikely ally had emerged to challenge the mores of the day.

Cheviot played to audiences as small as twelve, in Fraserburgh of all places, on that first tour; but persevered and went on to tour the Highlands and beyond, gathering larger audiences along the way. Village halls which had never seen a live play performed were the venues. Folk in far-flung places whose own grandparents had witnessed the Clearances first hand became both spectators and willing participants in this new theatre.

I first saw Cheviot in the 1970s: yes, I am that old, and for free. Strathclyde Regional Council, God rest its cotton socks, had hired a Glasgow performance space so that John McGrath’s take on Scotland’s turbulent economic history could be played out to a wider audience.

What did I make of it then? I can recall the surprise at getting the afternoon off from work, and I can still remember wondering what on earth the city fathers hoped to achieve by exposing both me and my fellow workers to cutting edge agitprop theatre, since we were on the verge of revolution most of the time already. Perhaps they thought that Cheviot might just calm us all down a wee bit.

The show’s pedigree is unquestionably anti-establishment. Estate Factor Patrick Seller burns down a croft house with poor old granny still inside; the loathful Duke of Sutherland evicts 15k of his tenants to make way for 200,000 sheep; Highland regiments are sacrificed on a colonial whim, and Highland culture comes under sustained attack from the capitalised aristocracy.

The Astors, David Cameron’s family and a toupee-topped golf course magnate with Lewis connections all take it firmly on the chin; all in the best possible taste of course, and with unforgettable sing-along ditties, including:

Performed by the Dundee Rep Ensemble as a Highland Ceilidh, Cheviot has been brought bang up to date. The timeline of the original production concluded with the discovery of North Sea oil, but now concludes with the oil exploration downturn which Mark Carney has described as:

“a challenging environment which, given global prices, may persist for some time.”

The cast of ten play multiple roles and generally this works really well. A coat rail of costumes stands to hand, stage left, and fast changes are the order of the day. 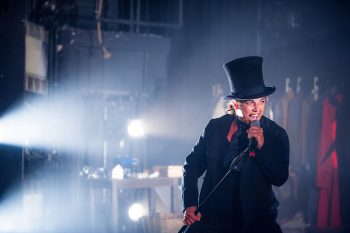 Stephen Bangs moves fluidly between his role as the plaid-clad Sturdy Highlander and that of the totalitarian bible thumping preacher, while Barrie Hunter’s Duke of Sutherland alternates with both an old man and an old woman.

The audience have a big part to play too. This is Ceilidh after all. It’s safe enough to sit in the front row, so long as you don’t stick your hand up too high; but be warned that this production takes audience participation to entirely new levels.

Early on, during a warm-up Canadian Barn Dance, half the audience appeared to be heading off out to Union Terrace as Musical Director Alasdair Macrae called out the steps.

A hilarious sing-along parody of the Alexander Brothers stalwart “For these are my mountains and this is my glen” follows, before the more serious business of lampooning the men who own your glen begins in earnest.

“It’s SHITE being Scottish! We’re the lowest of the low. We’re ruled by effete assholes. It’s a SHITE state of affairs to be in … and ALL the fresh air in the world won’t make any fucking difference!”

He may have had a point, although McGrath might have disagreed on the finer detail of Renton’s argument. Cheviot, for all the humour – and some of it is very black indeed – takes the stance that the people don’t own the land under their feet; but perhaps they should!

Today’s Cheviot continues to hit the zeitgeist. The message of this play is as relevant today as it was when first performed in the early days of the oil boom. Nothing quite like it had seen before and if you are a newcomer to McGrath’s work, Cheviot will be nothing like you have ever seen before.

Make up your own mind, go see the play. I guarantee that you won’t be disappointed.

As John McGrath once said:

“Cheviot is the music of what is happening.”

The Cheviot, the Stag and the Black, Black Oil performs at HMT Aberdeen until Thursday 6th October