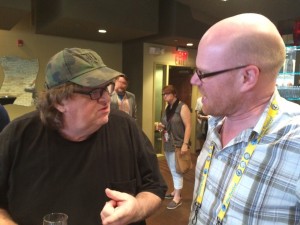 Film maker Anthony Baxter launched a crowd funding appeal to get his next film out before the American elections.

Menie Estate residents will confront American Trump supporters with facts; the film will share these reactions.

Anthony and his partner Richard Phinney will bring us the latest from the Aberdeenshire coast and some of those caught up in the activities at the estate.  When the duo worked on their first film, You’ve Been Trumped, they were infamously arrested – the first time journalists were arrested in Scotland.

The arrests were condemned soundly by the NUJ. The crime? Trying to find out when the Forbes Farm residents would have their water supply restored after Trump’s construction team broke the supply pipes. Charges were dropped.

The film will go out in American in advance of the Thursday 8 November election date. An Aberdeen premier will be announced shortly.

There are a variety of rewards available, and all contributions are welcome.

Aberdeen Voice’s Suzanne Kelly was one of many people interviewed for the film.