A George Street clothing store’s unrepentant sale of fox and racoon fur items has sparked off a petition and a series of protests. The unrepentant retailer Escale France has not answered Aberdeen Voice’s request for comment on its choosing to sell items featuring the pelts of animals which would have suffered immensely in their brief, unnatural lives confined to cages before an eventual electrocution, drowning or bludgeoning to death.

As Escale France can neither find any words in defence of its position (if such is possible) or is unwilling to speak to the press, the press speaks to animal welfare groups, individuals, fashion experts – and children – as to what is wrong with the fur trade. By Suzanne Kelly 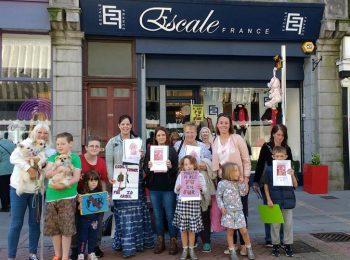 Fur is making something of a comeback; a comeback among people who by default are lacking in compassion and empathy.

There is no excuse that their meat can be used to feed the hungry.

Depending on the animal, dozens of animas will be skinned (sometimes alive) to create a single garment. Escale France is not bothered.

Here are quotes from some of the protestors who attended legal demonstrations on Thursday 15 and Saturday 18 September (more demonstrations are planned).

Christine Arnold Solomon, fashion lecturer who is opposed to the use of animal fur, told Aberdeen Voice:

“Stella McCartney has built a whole designer empire built on not using any animal products in anything including perfume; she uses lots of beautiful faux furs and gets the same aesthetic.”

“How the animals are raised; they grow up in a cage and the doors never open until it’s time for them to die.

“They are anally electrocuted when they are often still alive – they are shocked, terrorised beyond belief.”

“It is murder. I have a dog, two rabbits, two rats, 3 cats… they all have feelings; they can get scared.”

The demonstrators had informed the police of their plans in advance; the police who attended were found to be very helpful by the protestors. Signs and  placards, chanted slogans and discussions with passers by took place.

Many people were shocked to find a store in Aberdeen selling real fur; one such piece for sale is a dead racoon’s pelt dyed a pink colour – which further begs the question as to why fake fur was not used – should any argument be  in the first place – a fake pink fur could have sufficed without the animal destruction.

A petition for those against this store’s use of fur can be found here:

Anyone wishing to join the peaceful protest group can leave a comment on this article, asking to join the closed Facebook group. A further protest is planned for Saturday 24 September at Escale France from noon until 3pm, close to John Lewis.