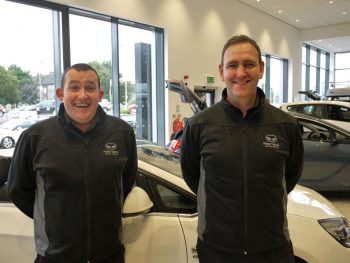 Gavin Fairweather (left) and Richie Cooper will pedal for charity

Two members of staff from motor specialist Peter Vardy Vauxhall are preparing to tackle a self-styled Tour de Vardy in aid of charity following an inspiring summer of British cycling.

The pair, both of whom are keen cyclists, have been in training for the challenge, which forms part of Peter Vardy Aberdeen’s year-long CSR (corporate social responsibility) partnership with Home-Start Aberdeen.

The cyclists’ 230-mile route commences from the Peter Vardy CarStore in Glasgow and incorporates stopping points over the weekend at the company’s showrooms in Motherwell, Edinburgh, Dalgety Bay, Kirkcaldy, Perth and Dundee. They will be followed by two colleagues in a liveried support vehicle and hope to receive lots of additional moral support during their stops along the route.

They are due to reach their final destination – the Peter Vardy Vauxhall showroom on Aberdeen’s Lang Stracht – late afternoon on Monday, 3 October.

“All of our colleagues throughout Peter Vardy in Scotland are aware of what we are doing and we are looking forward to seeing as many of them as possible during our scheduled stops on the Tour de Vardy,” says Richie.

“It’s a pretty challenging route so the friendly faces and encouragement will spur us on – along with the knowledge that we are raising funds for local families in need of help.”

“We are thrilled that Richie and Gavin have chosen to raise funds for us in this way. The Tour de Vardy is an amazing challenge in itself, however we are aware that a lot of planning and training has also gone into this event.

“Although we have recruited a record number of volunteers this year, demand for our services continues to increase, so we desperately need to attract and train additional people.  The money raised by the Peter Vardy cyclists will help to support this work so that we, in turn, can support a greater number of families.”

The Tour de Vardy is one of a series of fundraising events planned by Peter Vardy staff throughout their year of joint working with Home-Start Aberdeen. The cyclists’ appeal has already received a boost in the form of a £2000 pledge from their employer. Anyone who wishes to support their efforts can donate at http://uk.virginmoneygiving.com/team/PeterVardyVauxhallAberdeen.