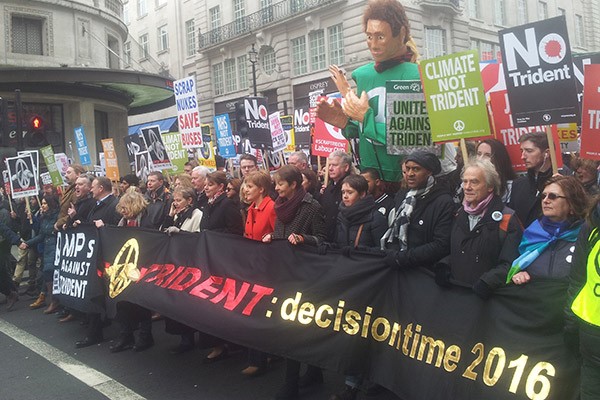 David Cameron has used a speech at the NATO summit in Warsaw to announce that the long-awaited vote on Trident replacement will take place on Monday 18th July. It isn’t yet known whether MPs will be asked to support replacement in principle, or whether they will be asked to consent to the building of four new submarines, at a cost of £41bn.

CND analysis has shown that the lifetime cost of Trident replacement will be at least £205bn.

“At a time of disarray in politics this is not the most sensible time to be making this decision. Such a decision has profound implications and should not be treated as a political football. The renewal of Trident goes against the Nuclear non-proliferation treaty.

“Rather than acting as a deterrent having nuclear weapons makes us a more likely target in the event of nuclear war ever happening. They are weapons of mass destruction that can kill millions. They don’t keep us safe, divert resources from essential spending and are based in Scotland.”

Opposition to Trident is growing both inside and outside Parliament. MPs from every major party are expected to oppose the Government proposals.