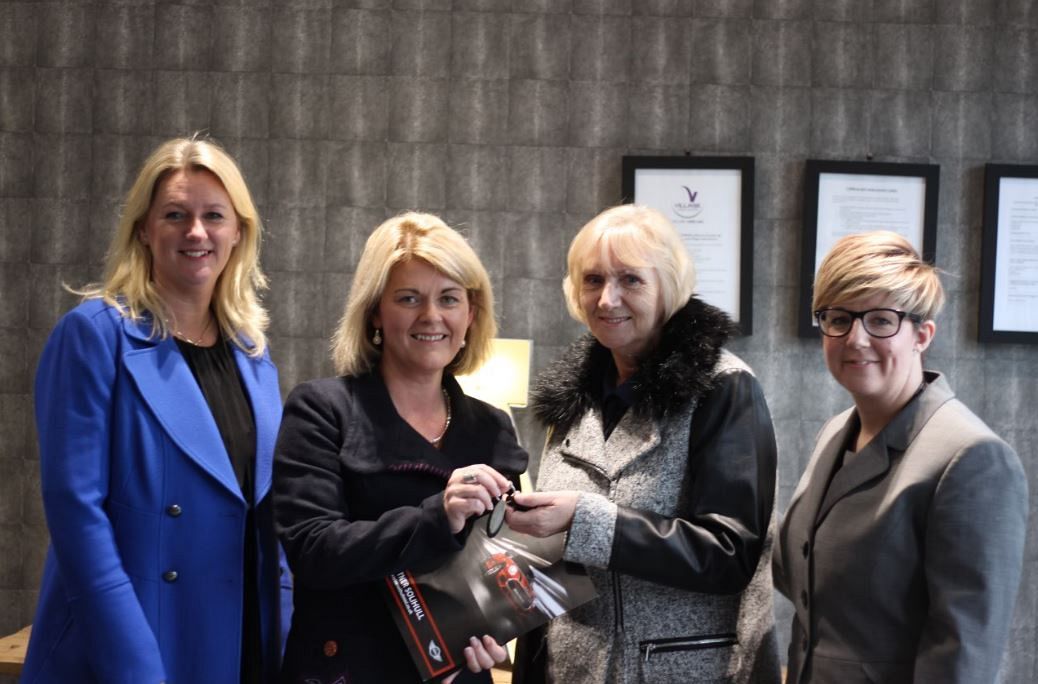 Lesley Mitchell has never won a prize in a competition before. So when her name was selected to win a Mini Cooper in a UK wide draw that attracted tens of thousands of entries she simply could not believe it – and little wonder. Statistics show she had a greater chance of scoring a hole in one at golf or being injured by a firework than winning the brand new motor.

Lesley’s ticket was selected from more than 100,000 entries to the Village Hotel Club’s promotion to win a dream car.

The chance of winning a striking Mini One 1.2 Petrol attracted a massive swell of interest from revellers at each of the hotel group’s 28 hotels across the UK, from Aberdeen to Bournemouth,  Edinburgh to Cardiff, and Glasgow to Blackpool.

When Village Hotels called Lesley by phone to break the fantastic news that she had won the car – worth £14,000 – she thought it was a workmate playing a prank. She and her colleagues had entered the draw while enjoying their office Christmas lunch at the Village Hotel in Westhill, Aberdeenshire, but none of them expected to be among the prize winners.

“When I got the call saying I had won I just automatically assumed it was some kind of hoax,” explains Lesley.

“We all entered the draw but never in a million years did I expect to win – I thought this can’t be right.

“It was a total shock as I have never won anything before, but after several conversations and emails from Lynn Fraser at the Village Hotel Group I realised it was true, it was a lovely surprise. To have won dinner, or a weekend break, would have been really nice but to win the Mini is the icing on the cake.”

The Mini prize looks set to bring maximum benefits for Lesley, who lives in Insch, Aberdeenshire, and is company secretary and office administrator for a chemical business in Bucksburn.

“Many years ago, in my youth, I had a Mini and this will be a lovely run-around,” Lesley continued.

“I’m calling this my ‘Mini Me’ and it will be my weekend car.

“I moved house last year and had the perfect Christmas in my new home, and then to find out I had won a car was just lovely. “

“It was wonderful to break the news to Lesley that her ticket had been picked at random as the winner of our nationwide draw which attracted over 100,000 entries from customers at our hotels the length and breadth of Britain.

“It’s not every day you hear that you have won a prize, let alone won a Mini, so it’s hardly surprising that Lesley was rather taken aback by her good news and that it took some time to sink in.

Village Hotels has 28 hotels located in towns and cities across the UK, boasting modern and friendly accommodation and excellent facilities. For more information, visit https://www.village-hotels.co.uk/