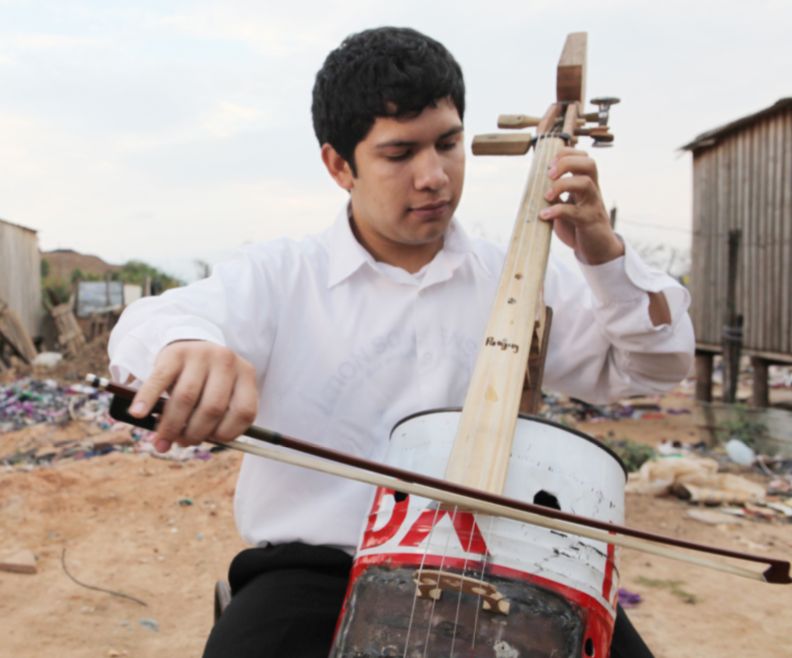 A young musician plays an instrument made from recycled garbage, in Landfill Harmonic.

With thanks to Barbara Holligan.

Take One Action! will open its first ever Aberdeen Film Festival on Fri 13 November with an exclusive screening of Landfill Harmonic, the inspiring story of a youth orchestra from the slums of Paraguay whose choice of instrument – recycled garbage – blazes with hope.
The festival will close with The Price We Pay, Harold Crooks’ acclaimed new documentary about international tax avoidance, it was announced today.

Landfill Harmonic, which won the audience award at Take One Action’s film festival in Edinburgh and Glasgow this September, follows the journey of the Recycled Orchestra of Cateura, a youth music group from the slums of Paraguay who build classical instruments out of garbage from the giant landfill site that towers over their homes – a story that captured the world’s imagination and featured in Time magazine and on Fox News.

The Take One Action! Film Festival sees thousands of Scots each year experiencing cinema with a difference, actively engaging with filmmakers, activists, politicians, journalists, and other audience members to explore new ways to create a fairer, more sustainable world – and to take action themselves.

Other festival highlights include a preview of The Divide, based on Kate Pickett and Richard Wilkinson’s bestselling book about social inequality, The Spirit Level and The Price We Pay, which has won rave reviews in Canada.

The Price We Pay examines the dark history and shocking present-­day reality of big business tax avoidance, which has seen multinational companies depriving governments of trillions of dollars in tax revenues by harbouring profits in offshore havens – originally created by London bankers in the 1950s. As well as tackling big issues, the festival tells fascinating human stories from across the world.

Stories of Our Lives is a series of moving vignettes about LGBTI people from Kenya, while Casablanca Calling introduces us to the women leading a spiritual revolution in Morocco by becoming Muslim leaders in a country where 60% of women have never been to school – part of a national response to a series of suicide bombings in 2003.

A special, free screening of Ivory Tower, an examination of the rising cost of higher education will be presented at the University of Aberdeen on Thursday 12 November. Every screening at the festival is accompanied by discussions with campaigners, artists and activists. Guests include representatives from Big Noise Torry (Sistema Scotland), Aberdeen Climate Action and SHMU Radio. Audience members are encouraged to get involved in the issues raised by the films.

“We want people to feel empowered to help make the world a fairer, more sustainable place by taking practical action alongside others in Scotland,” says festival director Tamara Van Strijthem.

“This programme was put together with the direct involvement and support of a great group of Aberdeen residents. We also want to encourage audiences in Aberdeenshire and beyond to organise their own Take One Action film seasons in their own communities.”

Tickets can be booked in advance via Belmont Filmhouse (01224 343 500) Some of the films are available to view in advance of the festival. For information, and to request interviews and images, please contact Tamara Van Strijthem, Executive Director on 07876 612 334 or tamara@takeoneaction.org.uk.

You can watch trailers for festival films on our YouTube channel.