Emma Rice has taken the Daphne Du Maurier 1938 bestseller out of the box, shaken it about a bit and injected a good measure of humour. Does it work? Duncan Harley reviews Rebecca at HM Theatre, Aberdeen. 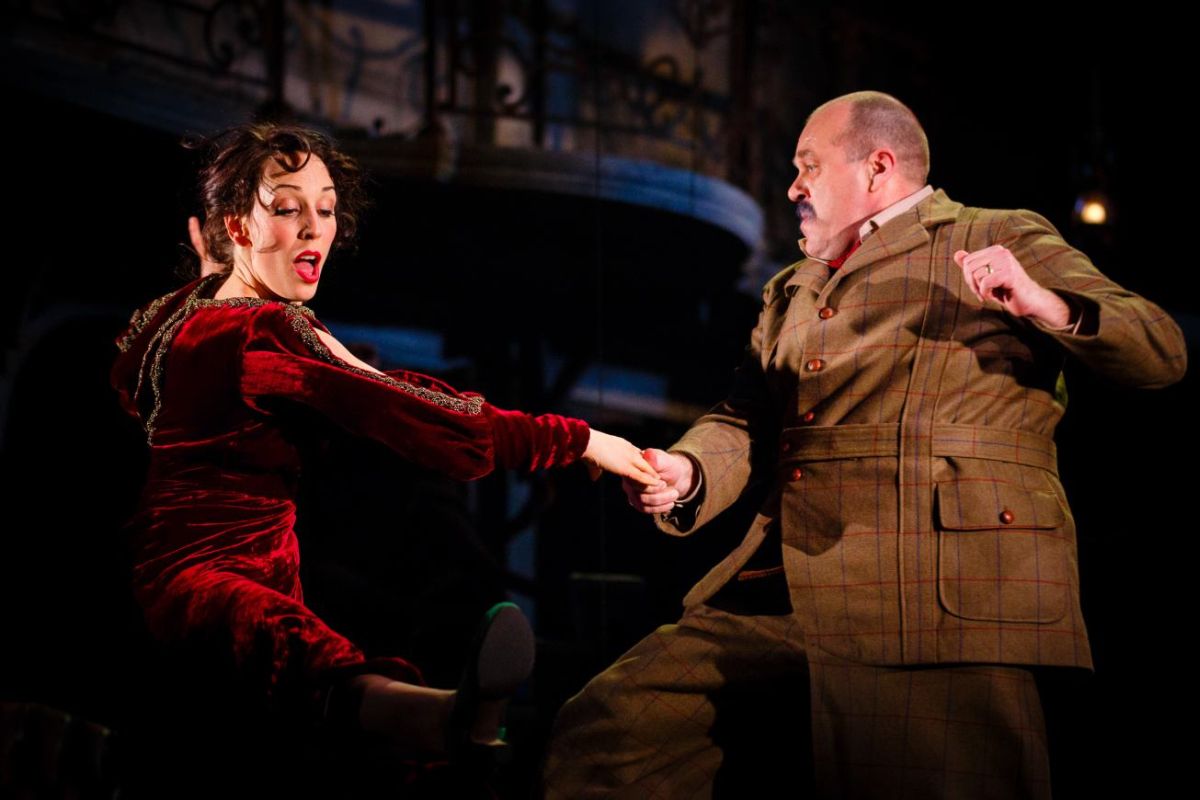 Lizzie Winkler as Bea and Andy Williams as Giles in REBECCA photo by Steve Tanner.

Billed as a study in jealousy, and described by Du Maurier as “a sinister … psychological and rather macabre … tale about a woman who marries a widower”, the story is indeed a dark one.

Following the mysterious death of Rebecca, his first wife, Maxim de Winter returns to his Manderley estate in Cornwall with a new bride, Mrs de Winter.

From the outset, all is not as it seems and the new mistress of the house sets out to uncover the secrets of the past.

Along the way she must stand up to the sinister housekeeper Mrs Danvers, assert her new-found authority and finally enable her new husband to come to terms with the unburied memories which desperately haunt him.

“Rebecca challenges us from the grave with her lack of care for society’s rules … I celebrate all of the wonderful female characters … from the passionate and loyal Mrs Danvers to the new Mrs de Winter, who wakes from her fairy tale slumber in front of our very eyes.”

Gender roles are to the fore in this adaptation. Men are men, and get up to man-like things such as drinking and womanising. Women are women and get up to dressing up and organising things. The exception to the rule is the unseen but omnipresent and very dead Rebecca de Winter, a manipulative sexual predator, incapable of love and intent only on satisfying her own pleasure.

Traditionally Rebecca is a morbidly dark tale but Emma Rice has lightened the story line somewhat. Sea shanties, performed by a sou’wester clad troop of jolly Cornish sailor men, lighten up the darkly intense mood and a Warhorse style puppet-dog sticks his nose into groins everywhere. There are episodes of knockabout and slapstick and at one point Jack – Rebecca’s cousin and ex-lover – attempts the great double-flickaroo’ cigarette trick.

Perhaps the most unlikely comedy turn comes via Katy Owen. Alongside playing the anguished harbour-side waif Ben, she plays Robert – the young Welsh house-boy. In a series of rollickingly hilarious skits Katy literally has the theatre audience in stitches.

Imogen Sage as Mrs de Winter, and Emily Raymond as the creepy Mrs Danvers, excel and LeslieTravers’ stage set is a triumph. Doubling both as decaying stately home and stormy quayside, the set appropriately suggests a place where nothing is as it seems. Rebecca’s wrecked boat becomes the wine cellar; the parlour effortlessly morphs into a boathouse and later a storm-swept harbour mouth.

If criticism were due, it would be on the grounds of a slightly hurried second half. The plot involves a lot of soul-searching and problem-solving, and at times the action moves perceptibly too fast for those unfamiliar with the storyline to follow. The notion of a Judge Jeffries style coastguard, played by Andy Williams, was also hard to swallow. But in them far off days in Cornwall, perhaps the local Coastguard did indeed double as hangman.

All in all though, the production works wonderfully well and the entire cast gave a polished and thoroughly professional performance.

After the final curtain call and as we all made our way down to the exits, a fellow theatre-goer was heard to remark:

“I wonder what Daphne would have made of it all?”

“I think she would have approved wholeheartedly.”