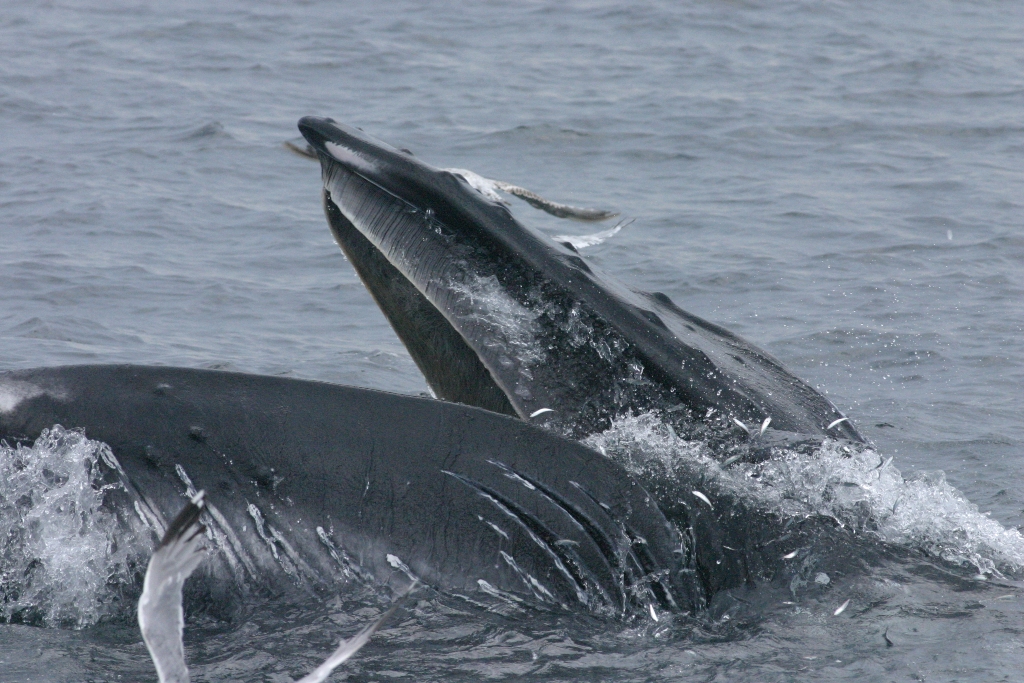 With thanks to Morven Russell.

An adult humpback whale, possibly greater than 12 metres in length, has been sighted in the Firth of Clyde this week.
This is the fifth such whale to be seen off western Scotland in the past month, compared with a usual total of just one or two per year.

The whale was sighted off Tighnabruaich in the Kyles of Bute on 6 July.

On 8 July it surfaced alongside the Scottish Ocean Youth Trust’s yacht, spouting and swimmingly strongly in a northward direction into Loch Fyne.

The whale was observed breaching out of the water and lob-tailing – a dramatic manoeuvre in which the animal throws its massive tail, up to five metres across, out of the water, creating a huge splash visible for miles. This behaviour could be used for communication, display or perhaps to ward off other animals.

Humpback whales were once hunted to the brink of extinction in Scottish waters, but in recent years Hebridean Whale and Dolphin Trust has noticed an increase in the number of sightings reported to its online sightings database (www.hwdt.org). It is unknown whether this represents a genuine increase in population size, a range shift into Scottish waters, or more vigilant reporting from members of the public.

Researchers in Ireland believe that humpback whales there are increasing in numbers.

Over the past month, there have been at least five different humpback whales documented off Scotland’s west coast, from the Isle of Lewis to the Firth of Clyde.

“Usually we expect just one or two sightings of humpback whales per year, so to have five in a month is very encouraging and exciting”, said Dr Conor Ryan, Hebridean Whale and Dolphin Trust’s Sightings and Strandings Officer.

“Although humpbacks can put on a spectacular show and are humbling to watch, we appeal to people not to stress the whale by approaching in boats. This individual is not in its typical environment and may be lost in the sea loch. Besides, there are strict laws in place to protect this species from harassment”.

The trust encourages members of the public to become citizen scientists – both by reporting sightings of cetaceans and basking sharks online and by joining a research expedition aboard its sailing vessel Silurian. Participants are trained in scientific methods and assist in data collection to better understand the distribution of whales, dolphins and porpoises around the Hebrides. Information on entanglement risk in ropes and lines is also collected.

“By joining us aboard, volunteers will have the opportunity to witness first-hand the wealth of the Hebridean marine environment, whilst contributing to a better understanding and consequently more effective management of cetacean populations off Scotland’s west coast.”

This week’s sighting is the third confirmed humpback whale in the Firth of Clyde in recent years. On previous occasions, the whales apparently navigated their way out to the open sea. However, this is the first time that Hebridean Whale and Dolphin Trust has documented a humpback so far north in the Clyde. Humpback whales are at high risk of entanglement in ropes and lines in the water and there have been at least two fatal entanglements in Scotland in the past 12 months.

Humpback whales have the largest forelimbs in the animal kingdom – leading to their scientific name Megaptera, meaning “giant winged”. They have 6m long flippers which make them prone to snagging ropes. Given that they cannot swim backwards, a simple entanglement can be fatal or lead to prolonged suffering.

“At the moment, the whale is swimming freely with no signs of distress or entanglement. Hopefully it will make it’s own way back to deeper water and come to no harm”, said Karl Hurd, Southwest Scotland Regional Coordinator of British Divers Marine Life Rescue, which is the competent organisation in the UK for rescuing stranded and entangled whales.