Thousands of spectators don fancy dress for the Aberdeen Asset Management Melrose Sevens, but what does your costume say about you? With thanks to Eoin Smith, Tricker PR. 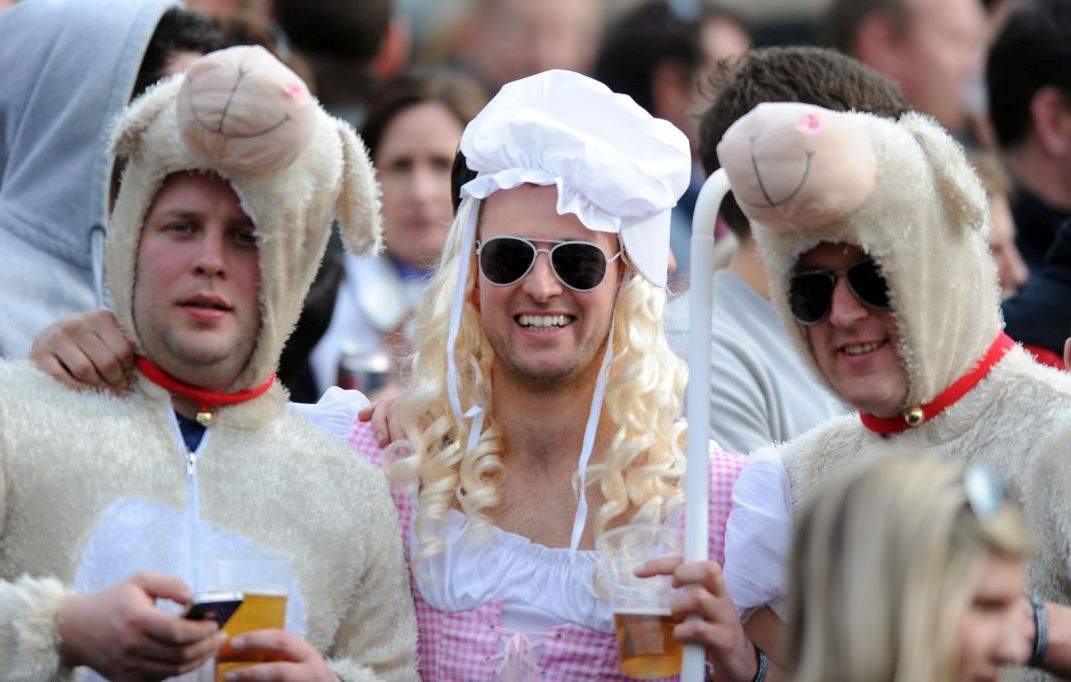 Bo Peep will have the most outgoing personality in their group of friends. The sheep go with the flow.

Watch any sporting event up and down the country and you will see hundreds of people arrive dressed up as fantastical creatures, fictional characters and terrifying ghouls with the aim of shedding their inhibitions and having a good time.
From 26 mile marathons and fun runs to premiership football and rugby sevens, wearing anything remotely normal is often actively discouraged.

In fact, fancy dress has become such a big part of sporting events that many fancy dress shops have clothing lines specifically for sport fans.

The Aberdeen Asset Management Melrose Sevens is renowned for its annual fancy dress themes and creative regulars working year round to find the best costume and out-do the competition. And with unlimited costume options available to the budding reveller – what does a costume say about its wearer?

Dressing as an astronaut or an alien is the perfect choice for someone with high aspirations in life.

They seek the respect of their peers by dressing up as genuine national heroes who are routinely blasted into space.

Quite often these dressers-up are likely to have been fans of Blue Peter as children, with tin foil, lampshades and even the odd scrap of sticky-back plastic making an appearance in their often-DIY costumes.

Little Bo Peep and her Sheep

Group costumes are always popular as they bring with them a sense of belonging and togetherness. With this particular group, there is a very clear leader: often Bo Peep will have the most outgoing personality in their group of friends, and the sheep will be those that are happy to go with the flow. Or, in the case of an all-male group, Bo Peep might just have been the one most eager to put on a dress. 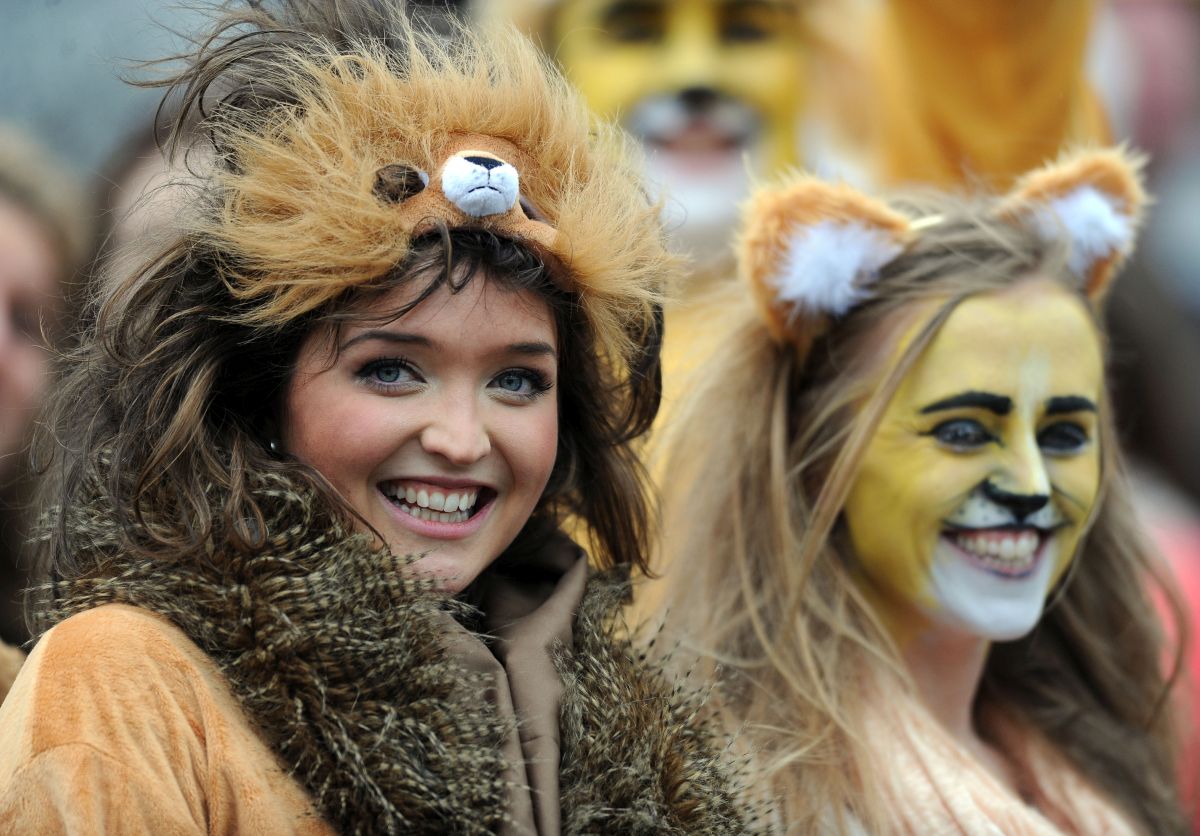 Dressing as an animal depicts your innermost desires and instincts, stripping your personality back to its most primal attributes.

A fierce jungle animal, like a lion or tiger, can reveal a feisty outgoing personality, ready to pounce on any opportunity presented.

Likewise, someone who dresses as a mouse or a rabbit is likely to be a bit quieter and more considered… or at least wants to appear to be!

Some food costumes are designed to tie in to a particular brand while popular choices – like bananas and carrots – appear to promote a healthy eating regime. Whatever choice is made, the food costume is designed to show how quirky and individual the wearer is while in reality they can look more fast food than haute cuisine.

Everyone loves to be a hero, and with the rise of geek chic the superhero costume is definitely in fashion. Dressing like a comic book hero can be empowering – making the wearer feel like they have unlimited potential just waiting to be unleashed. But the superhero costume is a double edged sword – pick one too common and you might not be the only Spiderman at the games, pick one to obscure and you could end up as the Bananaman sitting on his own in the corner!

Someone who likes to show off their intelligence might like to dress as an important figure from history. Dressing like one of humanity’s greatest thinkers is a sure-fire way of displaying just how cultured and learned you are – or at least how cultured and learned you think you are. And for those on a budget or in a rush, history provides a quick fancy dress fix – simply wrap a sheet around your body and you’re instantly transported back to Ancient Rome.

Rugby fan Gaby O’Leary loves to dress up for matches, and her Welsh daffodil costume has become well recognised at games across the UK – she even once zip-wired into Wembley Stadium wearing her rugby jersey and Daffodil head (under her crash helmet of course).

“I really enjoy dressing up for rugby matches as there is a real sense of camaraderie before, during and after the match. There is always friendly banter with the opposition’s fans, and recognition and solidarity from people in similar costumes. I think that camaraderie also extends to fans who don’t dress up as the excitement and fun factor of the crazier outfits never fails to start a contagious smile amongst all rugby fans.

“It’s a really positive social aspect of attending rugby matches – even if your team loses!” 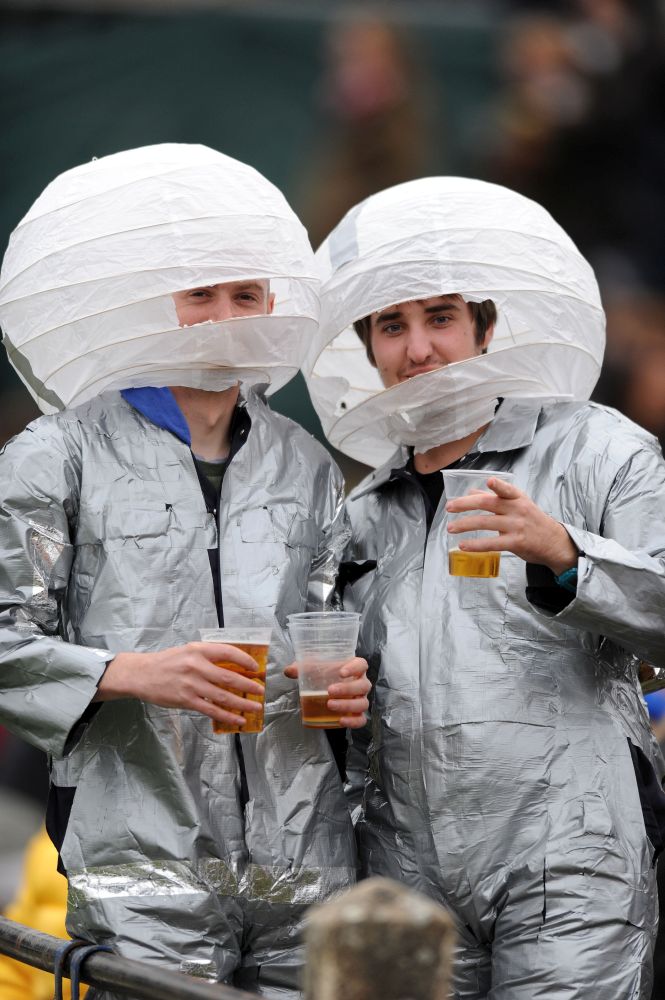 With a long tradition of fancy dress, the Aberdeen Asset Management Melrose Sevens holds a fancy dress competition each year.

As an added bonus, the Melrose Sevens tournament last year commissioned its own tartan designed by Bordernet and produced by Lochcarron of Scotland.

Featuring a yellow and white stripe on a black background, the tartan colours are inspired by the Melrose Rugby Football Club strip and fans are encouraged to incorporate this into their costumes.

“Each year we are astounded by the creativity and inventiveness of those who dress up, so we can’t wait to see the costume designs the fans will produce for our 125th tournament this April.”

The world’s oldest – and most famous – rugby sevens tournament, the Aberdeen Asset Management Melrose Sevens, takes place for the 125th time on Saturday 11th April 2015. The home of rugby sevens, the game was founded in Melrose in 1883. Teams from across Scotland will compete on the pitch, alongside international teams, for the Aberdeen Asset Management Melrose Sevens Ladies Centenary Trophy.