Whalefest took over Brighton’s exhibition space mid March with a programme of events unrivalled. Exhibitors and guests came from all over the world; Aberdeen was well represented by volunteers, visitors, and Ian Hay of the East Grampian Coastal Partnership, who had an informative stand. It was a pleasure to be there, and to see how many people care about the world’s oceans and their inhabitants, especially the next generation. Suzanne Kelly reports. 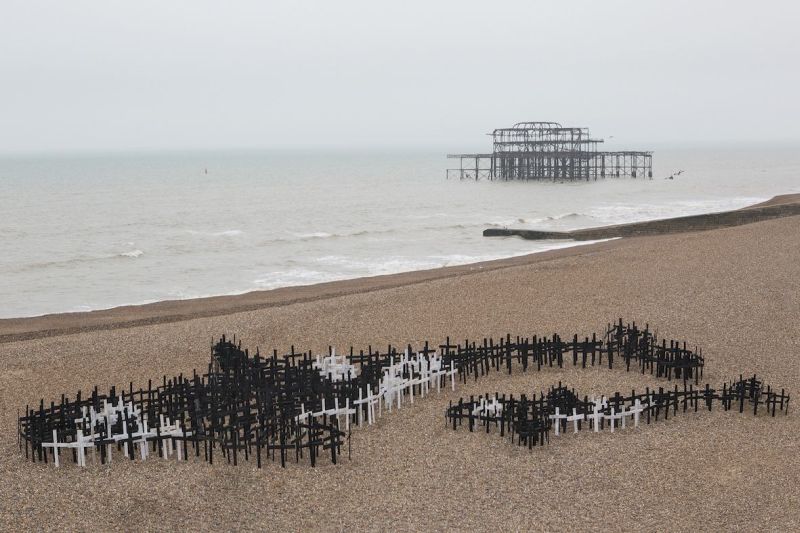 The bad news is that we are spoiling the world’s oceans. Toxins, plastic waste (which breaks down into granules, enters the food chain, and basically kills wildlife) and debris are threatening the ocean’s life.
Overfishing is carried out on a nearly unimaginable scale – miles of nets and lines kill every creature in their paths – seabirds, sea turtles, mammals – and a great deal of the edible fish winds up as: pet food.

Much of this overfishing is illegal, but many countries turn a blind eye or persecute organisations like Sea Shepherd, which actively engages with those who are illegally destroying sea life, not least the Japanese navy.

The good news is that Sea Shepherd exists, that children are realising how destructive our generation is and that things must change. People are trying to slow pollution, find ways to remove poisons and plastics from our seas, rivers and oceans. The good news is that there is hope.

Hope was in fine form at Whalefest. Interesting discussions and debates covered the issues, including very emotional testimony from people who once worked ‘training’ cetaceans to perform for our ‘entertainment’.

Many of these people have harrowing stories of how the highly-intelligent, social animals are brutally trapped, painfully and terrifyingly shipped around the world, forced to do tricks if they wish to eat, made to eat dead fish when they would have eaten wild prey in the oceans, and callously drugged and kept in tiny pools where once they had oceans to roam.

Anyone who thinks animals should be treated like this must think again.

The festival’s founders Ian Rowlands and Dylan Walker are rightfully proud at the growth of their event. The press release indicates that over 15,000 visitors were expected. As the press release reads:

“Together with a team of over 500 volunteers, WhaleFest is the dream realised for its Brighton based founders, Ian Rowlands and Dylan Walker. Ian is a former journalist and wildlife travel company director and Dylan is a former marine scientist and author of numerous books on whales and dolphins.”

“Every single day 1000 whales and dolphins are killed from what we do to our oceans. Some countries still hunt them. Many are taken into captivity. Intelligent, sociable, emotional, long lived, they are just like us, yet population declines and extinctions loom for these public-friendly icons of a fast-collapsing marine ecosystem.

“WhaleFest is the global gathering that gives whales and dolphins a more powerful voice. By being popular and entertaining we can touch the hearts and minds of an audience of millions of people and impact on the world’s decision makers.”

TV presenter Michaela Strachan gave an informative talk illustrated with footage of her engaging with whales in the wild; the room for such presentations was decked with life-size images of different kinds of cetaceans.

The Canadian Marine Environment Protection Society had an informative stand and participated in some of the discussion groups.

For many the highlight was a video link presentation from Sea Shepherd’s Captain Paul Watson. Watson is not welcome in the  UK or indeed a few other countries where arrest warrants / lawsuits are intended to hinder or cow him and Sea Shepherd.  As Watson described some of these legal wrangles, we were truly in the realms of farce.

Watson started this now global movement back in 1977. As their UK website advises:

Watson talks for a great deal of time without ever losing an ounce of conviction; he is driven, passionate, and he’s not kidding. The movement is now huge, but volunteers and funding are always wanted.

Paul Watson explains that in 2002 when Sea Shepherd first went out against the Japanese whaling fleet, no one knew what was going on; not even the Japanese people.  He shows footage of violent whaling activity.  He talks about how non-violent movements are often treated violently. The footage shows dramatic engagements between whalers, illegal fishing boats and Sea Shepherd vessels

“We’ve had harpoons fired at us; we’ve been rammed we been fired on; we’ve been attacked by mobs; we’ve been beaten…” Watson explains over the footage.

The active roles on the water with Sea Shepherd are for those with nerves of steel, stamina and cool heads.

Recently the Dutch Postcode Lottery donated 8.3 million Euros. Which is just as well, for one of the fleet, the Bob Barker, is (at the time of writing) on the longest ever pursuit of a pirate fishing vessel. I’ve recorded Watson’s talk, and when time permits will write further about this movement.

Surely Sea Shepherd must be the most important development to saving the world’s oceans and wildlife that the world has ever seen. That might seem like a grandiose statement – but the direct action, the public support, and the successes (evidence collection, halting whaling, stopping illegal fishing, showing the world what is taking place at sea) is crucial and without precedent.

How long have you been with Sea Shepherd?

“So I was lucky; when I applied to Sea Shepherd because of my experience I was taken aboard our flagship vessel as first mate; that was really exciting and I was thrown in at the deep end.  I saw direction action straight away.”

I invite her to tell me about that. We’ve seen the dramatic footage (at Whalefest of Sea Shepherd in action’ – the harpoons, the water cannons and shots being taken at people. In Scotland we’ve had USAN apparently threatening Sea Shepherd people (caught on video).

We talk about the fact she is a woman and a captain for Sea Shepherd; there doesn’t seem to be any ‘glass ceiling’ in this organisation.

“When Sea Shepherd did me the honour of asking me to be a captain, the first thing they asked me was if I was prepared to be arrested, and I said ‘Of course I am’.  Of course I’d risk my life for the oceans and risk arrest. It’s part of the job.”

I ask Jessie if she will be one of the crew that will eventually come up to Scotland for the seal campaign; USAN are expanding operations, and as they have indicated, they are willing to kill seals that try to eat salmon:  something for anyone who thinks that there is no real cost to buying wild Scottish salmon to think about.

“I will probably get deported out of the Faroes; if so I will help out the seal campaign. We have some exciting campaigns coming up.”

I have no doubt of that.

There are activities, information stalls, merchandise to support relevant charities; the whole thing is a success, and the organisers are to be congratulated.

Outside the Brighton Centre, on the beach a large number of crosses have been placed in the stony shore.

These represent cetaceans that have died in captivity, ill-used and cruelly treated to create barbaric entertainment. The hugely-successful documentary Blackfish has raised awareness, and many of the operators of these marine venues are feeling the financial backlash as their behind-the-scenes realities are exposed.

Perhaps some of these children that enjoyed the day will take up the conservation and activist roles that will be needed if we are to protect and improve the world’s oceans. If we don’t stop going down the path we are already far along, there will be no coming back as was proved today.

We can’t live separately from the oceans. However much money there is to be made from exploiting the seas, it’s time to step back and think of what is happening. There is an old saying that a capitalist is someone who will sell you the rope you’re going to use to hang them with. We are in danger of being hung.