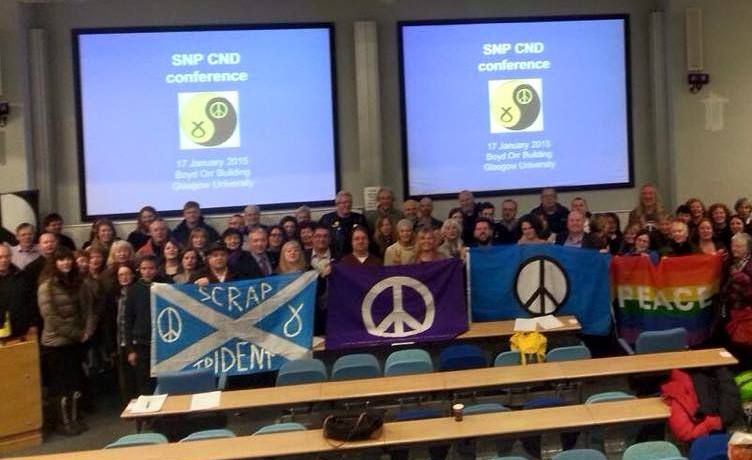 Members of the SNP CND conference in Glasgow

North East MSP Christian Allard renewed calls to scrap Trident during a speech at the SNP Campaign for Nuclear Disarmament (CND) conference at the weekend. Mr Allard took the opportunity to urge SNP members to work more closely with local CND groups to get more SNP MPs elected so “we can get rid of Trident”.

His comments come as a Survation poll found that 59.9 per cent of Scots want nuclear weapons removed from the Scottish waters.

As a member of Aberdeen and District Campaign for Nuclear Disarmament Mr Allard has taken part in many events in the North East calling for the removal of weapons of mass destruction from Scottish waters and he urged new members to do the same.

The North East MSP spoke of how many SNP members signed up to the CND at the Music Hall in Aberdeen during First Minister Nicola sturgeon’s stadium tour.

“With membership now standing at more than 93,000 the SNP is the strongest vehicle for progressive change in UK politics.

“When Nicola came to the Music Hall in Aberdeen I saw many SNP members signing up to the CND – I hope these members become active in the Aberdeen and District Campaign for Nuclear Disarmament, adding to the strong local voice against weapons of mass destruction.

“The General Election in May represents a fantastic opportunity for a large group of SNP MPs to force Westminster to rethink its policy on Trident.”

A House of Commons debate today [Tuesday 20] – called by the SNP, Plaid Cymru and the Green Party – offers an opportunity for MPs of all parties and from all parts of the UK to oppose spending £100bn on a new generation of nuclear weapons at a time of continued austerity.

Commenting on the news that Labour would ‘boycott’ the debate on Trident renewal at Westminster, Mr Allard said:

“Labour are clearly hiding from this debate because they find themselves in an untenable position.

‘’It is absolutely indefensible and morally repugnant to waste £100bn on weapons of mass destruction whilst food bank use is rocketing, and more and more children are being pushed into poverty. I voted to oppose nuclear weapons in Parliament this week so that we can better spend these colossal sums of money on making a positive difference to our society.”

“It is a sad indictment of what the Scottish Labour party has become that they voted to support the renewal of Trident – only a week after they voted to push through more Tory cuts.”

“With a strong team of SNP MPs after the General Election, Scotland can hold the balance of power and can force Westminster to abandon this disastrous commitment – and ensure these immoral weapons are removed from Scotland for good.”

Note: The SNP CND conference was held on Saturday 17 January at the Boyd Orr Building at Glasgow University. For more on the Survation poll: http://www.snp.org/media-centre/news/2015/jan/majority-support-snps-anti-trident-call