Youth and Age in The Old Curiosity Shop: Nell as an abused child was the theme for November’s local Dickens Fellowship meeting. Our great friend and University of Aberdeen alumnus Professor Grahame Smith introduced the subject, admitting that his is very much a 21st century interpretation of the novel which divides Dickens’s readers most. By David Innes. 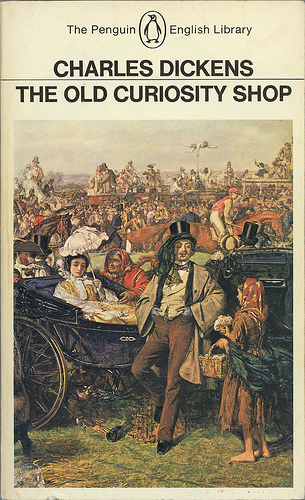 Grahame argued that critics, including Huxley and Wilde, who derided The Old Curiosity Shop missed the novel’s intensity in their dismissal of Nell as an over-sentimentalised caricature.

Rather, our guest argued, she is an innocent abroad in an immoral world, although signs are there that she is just a normal child with typical childlike attitudes and reactions.

Whilst not streetwise, she is no innocent, even shown laughing at life’s absurdities in the early part of the novel.

Nell’s downfall, we were persuaded, is almost-wholly due to extraordinary external pressures on a character too young and undeveloped to bear burdens that would have been extremely stressful on a well-adjusted adult.

Quilp’s incessant stalking lechery, her grandfather’s gambling addiction, neglect and his dereliction of all paternal responsibility, and the horrors of industrial Britain laid bare as she and her grandfather journey away from their immediate metropolitan troubles, all conspire to break the child’s spirit.

Grahame drew parallels with Little Dorrit in both young characters’ methods in dealing with their elders’ fantasy worlds. In Nell’s being failed by the adult world, there are parallels with Bleak House. Nell’s ‘loathing of food’ and her being ‘too tired to eat’, it was suggested, hint at anorexia, a recognised clinical condition unknown in 1841.

The lively discussion which followed Grahame’s thought-provoking talk engendered further thoughts on the abusive nature of Quilp’s relationship with his wife and mother-in-law, and the role reversal in modern society where children protect and manage families in which parents are drug addicts or alcoholics, to keep family together and to provide a veneer of normality amid chaos.

The odd narrative structure, the clumsy (some might say) device Dickens used to flesh out what was originally a short story, was also explained and dissected during a fascinating evening in expert and inspiring company.