Donald Trump bought the Menie Estate in 2006; by 2008 unprecedented planning permission was granted to create ‘the world’s greatest golf course’.

Environmental protection was swept aside for the optimistic promises made: a one billion pound investment, jobs for local people in the thousands, a massive increase in tourism and, er to ‘put Aberdeenshire on the map’. Menie Estate residents and those who stood up for them or the environment were vilified in the press. Farmer Michael Forbes was said by Trump to live in a ‘pigsty’. Residents had their lives transformed, but not for the better.

Some would argue that putting profit before the environment and the rights of the affected families was justified. No one could argue that these promised benefits never materialised. Part 1 of Trouble with Trump focused on how rubbish and waste are dealt with by the 5 star resort, showing that if anyone is treating the land as a pigsty, it is not Michael Forbes.

What is life like at the estate for residents now? What are some of the issues and problems? Why is nothing being done by the Aberdeenshire planners, outdoor access officers, and the residents’ MSP, Alex Salmond? Suzanne Kelly reports.

Bunds: Not per planning permission – so why no enforcement? 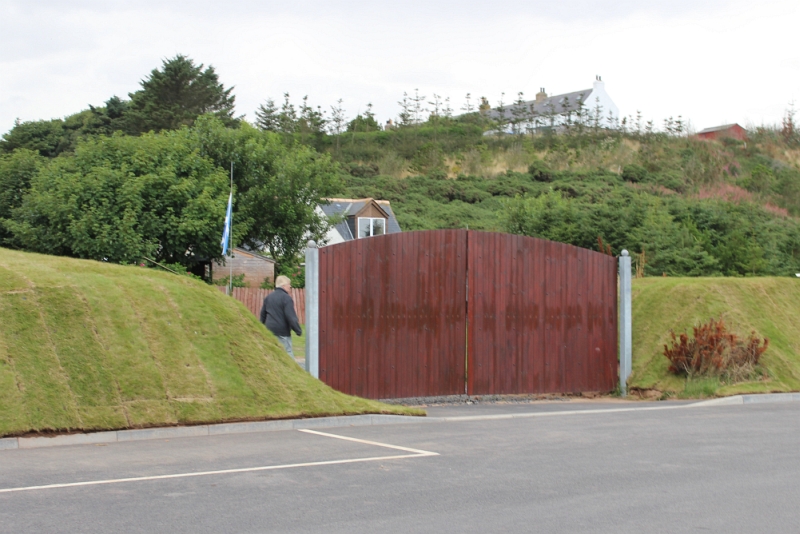 The gate erected by TIGLS which conspires with the bunds to restrict access between the Munros’ property and the Menie golf Links car park.

Menie Estate residents at Leyton Farm Cottage and Hermit Point once had views across open land filled with wildlife; they saw the coast and the sea.

However, Trump had giant mounds of earth bulldozed into position between Leyton Farm Cottage and his resort.
He also planted scores of conifers between Hermit Cottage and his land.

The mound was not given planning permission in advance.The bund at the Munro property is over 2 metres high.

Dirt and sand from it has blown into the Munro’s Leyton cottage property, damaged their garden and got into their automobile engines.

The bunds serve no other purpose but to screen the cottage from the resort visitors’ delicate vision. Trump’s objection to offshore wind farms is also to avoid stressing golfers from having to see anything they might not like. The cottage used to enjoy the sunlight; the bunds has changed this. The mounds seem even higher than their 2 metres, as they are covered with trees which are routinely replaced when the plants which cannot thrive die.

There was apparently an order issued to the resort to reduce the height of the mounds; this has not been done. Trump had at one point commissioned an environmental report which made the outlandish claim the bunds were good for the cottage occupants. The report’s authors had made no contact with the residents when coming to this conclusion; in fact it was already very public knowledge that residents wanted the bunds removed.

No one at Aberdeenshire Council’s planning office seems to be doing anything to remedy this situation.

Right of Access – A worsening problem; an impotent enforcement system

In Scotland people have the legal right to access the countryside for recreational purposes – even to cross golf courses if they wish (with certain conditions when golf is being played). No one is interested in enforcing these rules at the Menie Estate.

Aberdeenshire has officials who are specifically charged with ensuring land owners comply with the access code; they have over the years largely ignored the Estate and ignored specific claims brought to them. The officers initially sent emails saying they were meeting with residents; then they admitted they had not met with either the Forbes or Munro families.

They have complaints and photographs of the issues. They refused calls to come and meet with the residents and see the situations and discuss them. Instead, they handed out forms, which many were reluctant to fill out, given their access was being blocked by an organisation known the world over for its litigation. Gorse blocks some of the paths; some frequent visitors believe the gorse was planted deliberately to block their way.

A main issue is the gate locked shut separating Leyton Farm Road from the parking lot. (The parking lot itself was not as per the planning permission – and nothing seems to have been done about that either).

Here is how the main gate currently looks which separates the club’s parking (itself apparently not built to the agreed specification) from Leyton Farm Road, the track the Munro property is on. The situation is worse than it was a few months ago – the locks seem nearly fused by rust, and the right-hand side of the gate is all but impassible. This contravenes the right of access laws without doubt.

Anyone who is old, infirm, has mobility issues, or who would wish to cycle is not getting past this gate, whatever the law says.

The Shire will again be asked again to have this situation remedied. They are long aware of the problems including the gate, and have sat back as the situation continues to deteriorate.

Michael Forbes used to take his small wooden boat from the farm to catch salmon in the sea. Access from the Forbes’ farm to the sea has been halted. While this is not an absolutely clear cut access right, Michael caused no damage to the area when moving his boat, something he did for years with the previous owners’ consent.

The access pathway is not part of a course or being used in any way at present by the Trump organisation. But one day a gate was erected and was locked shut, contrary to access laws. The police told Michael that he if touched this gate that was put on the path he would be arrested – a very interesting interpretation of access rights, and a curious way for police to enforce the will of a landowner over the long standing use of a resident.

A senior politician has written a letter many months back saying he would look into the matter. Michael is still waiting for action. The boat sits unused on the farmland.

Reliable running water is no longer a right for Michael and Sheila Forbes – and Michael’s 90 year-old mother, Molly. When construction was initially underway some years ago, a Trump vehicle broke the water pipe serving Michael’s farm. The site manager is filmed in the Anthony Baxter / Richard Phinney documentary ‘You’ve Been Trumped’ telling the journalists that the pipe will be restored and made better than before.

This never happened. What did happen nearly immediately after the pair visited the site office was that they were illegally arrested, bundled into the back of a police car and had their gear confiscated. The National Union of Journalists condemned the arrest.

It was made clear in the new Anthony Baxter / Richard Phinney documentary, ‘A Dangerous Game’ that despite several years going by, the pipe has never been fully repaired. Michael and Sheila recently confirm that the water supply is not always reliable and they still need to take water from a nearby burn on occasion.

Surely someone in the Aberdeenshire administration would intervene to ensure residents and taxpayers have reliable running water like they once did?

There were a number of traditional outbuildings near Leyton Farm Road constructed in traditional materials. After the Trump organisation arrived, a new building sprung up which is hardly in keeping with the other buildings, and which may not have had complete advance planning permission. If someone elsewhere in Aberdeenshire erected a similar building without advance permission, they would likely be ordered to take it down.

Did this have permission? The indications are that it did not. The Shire’s officers are welcome to clarify this point.

Other deviations from planning include the parking lot, the lights in the parking lot (two which shown in Susan Munro’s cottage windows all night long were eventually ordered removed: this seems to be one time that the enforcement of planning actually took place).

One Law for the Rich and another for the poor?

It seems as if the agreed environmental conditions and the agreed planning specifics and access laws are neither being followed nor enforced with any conviction. The losers are the residents and those who want to exercise their right to access the countryside.

It’s hard to argue that the Shire’s planning department, the outdoor access officers, and the MSP Alex Salmond are doing anything to help these people. Salmond has sent representatives to the property before; one or two letters were subsequently sent. And as a result – absolutely nothing has changed. The invitation for Alex to personally visit his constituents still stands. We would hope he will make this as much of a priority as he made dining with Trump.

Is it politics, the fear of Trump legal action, an incompetent system, or a reluctance to acknowledge the problems here that is allowing these situations to go unchecked? You may wish to think on what is going on at the Menie Estate the next time you hear of the shire enforcing a minor piece of planning. The law is not applied equally or fairly in this corner of the North East Scottish coast, and the people who are meant to uphold the law are doing nothing.