Aberdeen Dickens Fellowship was honoured to have Professor Jenny Harley as guest speaker at its October 2014 meeting. Jenny is President of the International Dickens Fellowship and Scholar in Residence at the Charles Dickens Museum.

She is well-known to Dickensians for her publications The Selected Letters of Charles Dickens (OUP) and Charles Dickens and the House of Fallen Women (Methuen). The latter topic was the Fellowship’s focus for the evening.

Angela Burdett-Coutts, a woman of considerable means, being the heiress to Coutts Bank fortune, was a significant philanthropist, funding Ragged Schools and concerned about the plight of homeless and other unfortunate women in London Piccadilly.

She turned to Dickens to assist in creating a refuge for such women, some who would have been sacked servants without references, others prostitutes and not a few ex-prisoners.

The relish with which Dickens took aboard the project in 1846 is remarkable. He planned the refuge to replicate a familial environment, drew up a behavioural code, based on Maconnochie’s reward scheme, micro-managing the establishment of the house, Urania Cottage, in London’s Shepherd’s Bush.

It aimed to educate its unfortunate residents with a view to helping them to become ‘good domestic servants’, the type that would be attractive to employers. Yet the agreement was that those who had passed through Urania Cottage’s rehabilitation would need to be cut off from former immoral associates for fear of backsliding into former ways.

Transportation to the colonies to begin new lives was seen as the solution to this potential issue. Unfortunately for history, Dickens’s Case Book in which he recorded personal interviews with Urania Cottage hopefuls has been lost. He was notorious for fits of consigning personal records to bonfires.

The focus then shifted to the portal of ‘fallen women’ in Dickens’s writing. Oliver Twist (1837) had already shown Nancy in semi-sympathetic light, but in the novels which followed the establishment of Urania Cottage, Little Emily and Martha (David Copperfield 1849), Charley and Esther (Bleak House 1852), Sissy Jupe (Hard Times 1854) and Little Dorrit and Maggie (Little Dorrit 1855) are each examples of women suffering misfortune, saved by education, altruism or personal effort.

In the case of the Peggoty family in David Copperfield, there is even a successful and prosperous migration to Australia. 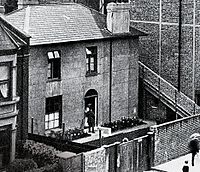 It is reasonable to suppose, our guest commented, that character and outcome in these works were in some way influenced by Dickens’s Urania Cottage experiences.

In researching Charles Dickens and the House of Fallen Women, Jenny Hartley was painstaking. She described how her efforts eventually took her to Adelaide and Melbourne – “that was the fun bit” – to try to conclude whether or not the experiences of Urania Cottage had enhanced former residents’ lives.

Dickens himself made some comment. In Household Words, he wrote of seven successful marriages of Urania House women, but tracing those who had passed through its doors was difficult for Professor Harley, in no small way due to the reluctance of Antipodeans, in decades past, to acknowledge transportees in their family history.

The jewel in the crown, however, is Rhena Pollard, one of the more feisty and assertive of Urania Cottage residents, and on whom, Jenny mused, Tattycoram (Little Dorrit 1855) may have been based.

It was to audience delight that we were informed that Rhena was traced to Canada, married successfully in Ontario, bearing eight children to Oris Coles. Pictures of the prosperous-looking Mr and Mrs Coles and of a plaque commemorating Rhena’s story were a happy conclusion to a fascinating and highly-informative talk from a dedicated and genial Dickensian.

The local Fellowship’s next meeting is on Tuesday 11 November.

We will meet at Grampian Housing Association, at the crossroads of Huntly Street and Summer Street, Aberdeen, from 1900-2100. Annual membership costs £20 and includes admission to all meetings. Entry to individual meetings costs £3. We are a welcoming and convivial collective.