There’s a weekend of top punk bands playing next month at The Tunnels. Voice’s Andrew Watson previews this upcoming event. 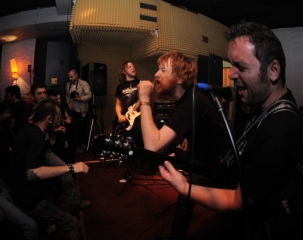 ‘Freedom of Aberdeen City’ is the area’s summer punk rock festival which is brought to you by DIY promoters Bile Yer Heid and Eck Ruffneck on Friday 4th at 18:00 and Saturday 5th July at 13:00.

Paranoid Visions are Ireland’s most infamous punk bands, and have Steve Ignorant, the vocalist from Crass, guesting on this year’s tour.

Rubella Ballet, who scored a Top Ten hit in the UK Indie Charts, will be playing their first Scottish gig since the early 1980s..

The Mob are straight off the back of a USA tour, having recently reformed. The south-west of England melodic punk band have not played Aberdeen since around 1983.

Oi Polloi return to Aberdeen for the first time in three years and have new, original Gaelic-language numbers to play for the punks and skins.

This will be a complete one-off event with many notable and influential political punk rock acts, coming from all corners of England, Ireland and Scotland.