‘Lay the proud usurpers low!
Tyrants fall in every foe!
Liberty’s in every blow!
Let us do or die!’

These lines from Scots Wha Hae by Robert Burns sum up the Battle of Bannockburn and gives the title to Quids In Theatre Company’s new production, Do or Die, which tells the story of the lead up to the most famous battle in Scotland’s history; Bannockburn. With thanks to Annie Begg. 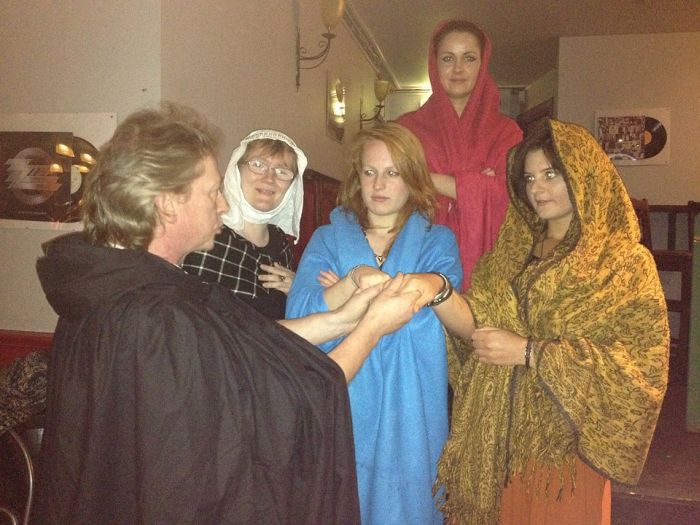 Last minute rehearsals for Do or Die : 700 years since Bannockburn which takes place from Sunday 22nd until Tuesday 24th June at St Nicholas Kirk.

As we celebrate 700 years since the victory that gave Scotland her independence from England, Quids In look at some of the events of the Wars of Independence through the eyes of the citizens of Aberdeen in this, the second of their local history series of events.

Last October, sell out audiences promenaded through the city centre, cowered in graveyards, shuddered in tower rooms as they enjoyed the promenade production ‘Suffer the Witch’, the story of the 1597 Aberdeen Witch trials. Now it is the turn of the Wars of Independence.

“Choosing the right venue for the piece was very important.  We wanted somewhere where the audience could feel that they were part of history. St Nicholas Kirk in Union Street was the perfect choice as it was one of the few buildings still standing which would have been here then.

“The foundations of the church date back to the 12th century so there would have been a church on this spot in 1306 when the citizens of Aberdeen are thought to have helped storm the castle in the name of Robert the Bruce. We also  particularly liked having the opportunity to perform the play on the actual anniversary of the battle.

“Our Community drama shows, give anyone who is interested the opportunity to take part in a theatre production based on the history of their local community. This is the second of six planned productions which will culminate in a festival of community theatre and local history in 2017.”

Tickets for the production are free but should be reserved through the Quids In website.