The Scottish SPCA is appealing for information after a heavily pregnant dog was abandoned outside Aberdeen Sheriff Court. 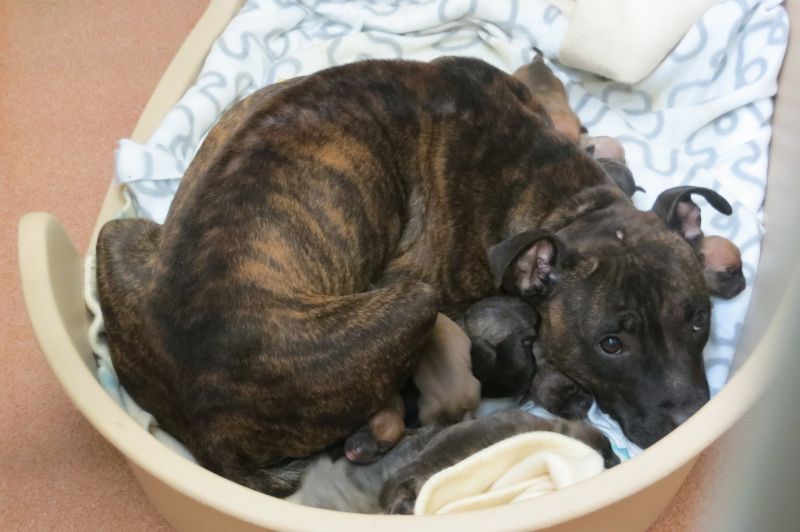 The dog, who has been named Sophie, went into labour while in the care of the police and gave birth to ten puppies but, sadly, two passed away.
Sophie and her surviving puppies are now receiving the attention they need at the Scottish SPCA’s Aberdeenshire Animal Rescue and Rehoming Centre in Drumoak.

Staff wish to stress that they will not be taking any rehoming enquiries about Sophie or her pups at this stage of the investigation.

“Sophie was put in an incredibly vulnerable situation and we’re glad she was rescued before she gave birth on the street.

“It was clear she was heavily pregnant which is why several passers-by were concerned that she had been tied up outside the court.

“Thankfully, Sophie and her eight pups are now doing well and she is proving to be a very protective mother.

“She was wearing a bright pink collar and a red leash but had no identification so we are asking anyone with information on who owned her to come forward as soon as possible.”

Abandoning an animal is an offence under the Animal Health and Welfare (Scotland) Act 2006 and anyone found guilty of doing so can expect to be banned from keeping animals for a fixed period or life.

Anyone with information is being urged to contact the Scottish SPCA Animal Helpline on 03000 999 999.