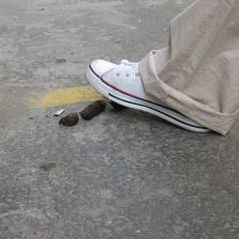 Latin Quarter is ‘moved’ to comment on the following piece which appeared in Thursday’s Evening Express.

‘North-East community leaders want to see all dogs’ DNA recorded on file, in a bid to crack down on pets fouling in public places.
‘Newtonhill, Muchalls and Cammachmore Community Council said storing the pets’ DNA would allow “faeces to be analysed” and the owners who don’t clean up after their pets to be identified, without having to catch them in the act.

‘The proposals come in response to The Scottish Government’s consultation, Promoting Responsible Dog Ownership in Scotland.

‘An Aberdeenshire Council spokesman said: “Officers routinely carry out enforcement patrols in Aberdeenshire, and any person found committing an offence is issued with a fixed penalty notice.”’
http://www.eveningexpress.co.uk/news/local/call-to-record-dogs-dna

Yes folks, somebody is so upset by dog crap they want a whole new Police Dept formed to deal with the tidal wave of filth – Dogshit Forensics.

I see this as an opportunity – I reckon we can knock up a script for a new police procedural TV show pilot and have it off to HBO by the weekend. What do you say?

Premise: He’s a maverick dogshit forensic detective with a drink problem, caused by the time he missed a mutant strain of Weils Disease spores and his own child died. Now, another outbreak threatens every single person in LA who spends a lot of time randomly handling dogshit, and so he finds himself in a race against time to stop the stray rogue mongrel responsible with a fixed penalty notice.

As the most intuitive detective on the squad, due to his habit of working without gloves, he knows he has to get inside the head of his adversary. However, what he doesn’t realize is that the evil canine responsible has already targeted his estranged ex-wife and has taken to dragging its festering brown starfish along her front porch…

“Dammit Chief, you can’t just waltz in here and dip your toe into this”

“Don’t turn your nose up, Princess – you can’t just expect me to leave a case like this at work”

“Something smells wrong, Akita – that’s human and I think I can prove it”

One Response to “Dogshit Forensics To Tackle Foul Play?”