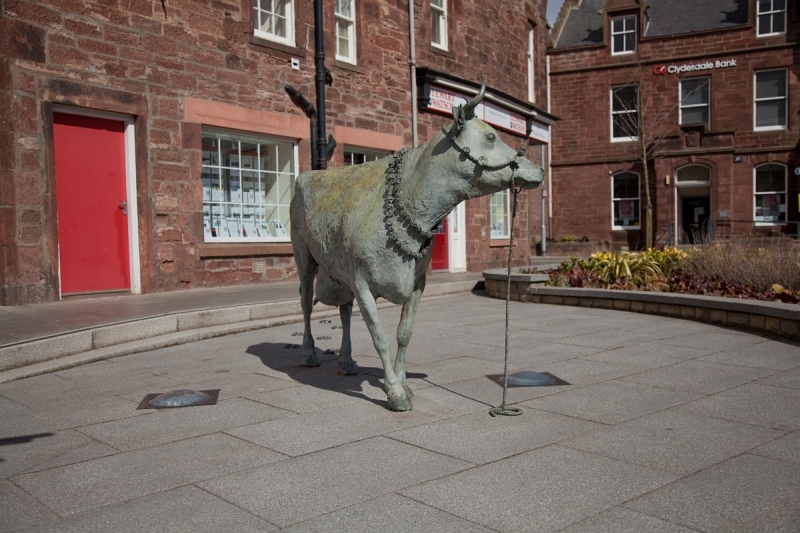 One hundred years on, Duncan Harley examines the story of the Fite Coo.

Almost a hundred years ago Lloyd George’s National Insurance Act came into force. The legislation was intended to improve the lot of farm labourers, fisher folk and factory workers who were often employed for a contractual period of six months or less.

The Act of Parliament (The National Insurance Act 1913) provided for medical and unemployment benefits for workers and their families who were in need of state support through either ill health or lack of employment.

The tax received a mixed reception. Suspicion and prejudice against government interference fuelled discontent in many minds and the bare fact that both workers and employers were required to contribute hard cash caused many to consider direct action.

The Scottish Farm Servants’ Union welcomed the measure since it offered some improvement for those workers who simply became worn out and too ill to continue working and who would otherwise have to rely on the mercy and support of former employers.

Many Scottish farmers, however, remained unconvinced of the merits of state support for those in need.

Protest movements arose in various parts of Scotland and in a somewhat strange alliance for the times, the Liberal government of the time found itself in sympathy with the Marxists over the issue of both land reform and workers social security.

The farmers around the Aberdeenshire market town of Turriff in Aberdeenshire were particularly incensed, partly because of the now increased costs of employing farm labourers and also because many genuinely felt that they already took good care of the workforce upon which they relied.

There were riots, demonstrations and protests.

In the end a farmer by the name Robert Paterson of Lendrum near Turriff became the focus of Sheriff’s Officers when he refused to pay what he called the “unfair and unjust tax”. He had previously been convicted and fined in court for 20 such offences against the 1911 National Insurance Act and had paid the accumulated £15 fine, however he refused to pay the arrears of National Insurance.

the authorities reacted by seizing one of his milk cows

A Unionist by nature, he publicly stated that “because it was a service that farmers and farm labourer would rarely use” he would not pay the tax imposed by a Welsh led government. Lendrum to Leeks became the campaign slogan.

Paterson quickly became a cause célèbre in the North East and indeed beyond. Following court action for the unpaid debt to the National Insurance Fund, the authorities reacted by seizing one of his milk cows, intending to auction it to re-coup the debt he owed to the government for unpaid National Insurance Contributions.

Things got from bad to worse. There were further riots and much civil disobedience. The seized cow then became the cause célèbre and the press had a field day.

The immediate events following the seizing of the Turra Coo by Sherriff Officers are well known.

No local auctioneer could be found to sell the beast and the “Fite Coo”, now emblazoned with the painted slogan “Breath Bad – Gummy Leeks” as a reference to the Welsh born Lloyd George, seemingly ran off home to Lendrum where after a few days it was again seized by the authorities and taken by train to Aberdeen’s Denburn Auction Market where it was sold for seven pounds on 16th December 1913 to a Mr Alex Craig.

Mr Craig then sold the animal on to a Mr Davidson for £14 thus making a tidy profit on the deal. 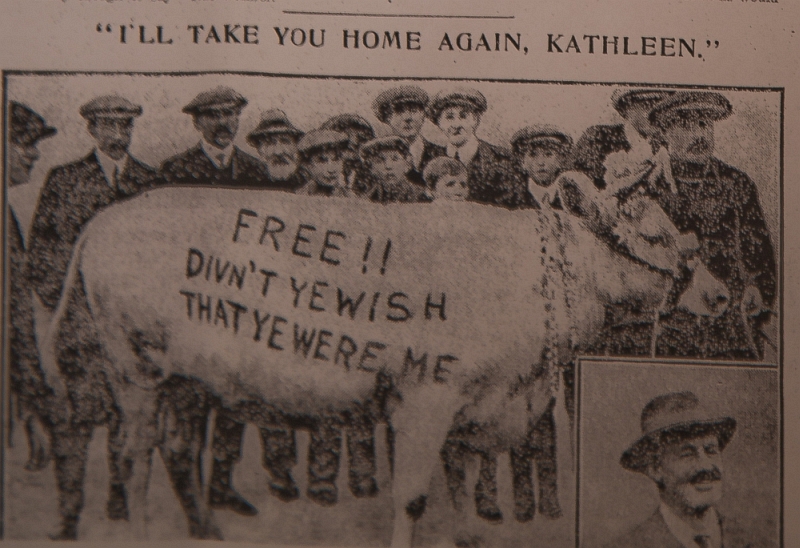 Mr Davidson then transported the now famous cow back to Turriff where crowds of townsfolk and farm workers gathered to witness the event. The local pipe band played “See the Conquering Hero Comes” and the poor cow sported more painted slogans on her sides including “Free! Divn’t ye wish ye were me.”

The war to end all wars was looming. Indeed many of the participants in this sometimes hilarious series of events would soon be dead. Sacrificed on the battlefronts of the 1914-18 war.

The cow however survived and was returned to Lendrum Farm, where it died of bovine tuberculosis in 1920.

Depending on which account is read, it was either stuffed and displayed at Lendrum Farm for a while before being sent by train to Aberdeen’s Marischal College for display or simply buried in a field at Lendrum to remain undisturbed for many years until excavations for a new water supply uncovered her bones.

The myth of the Turra Coo perpetuates to this day however.

The West Aberdeenshire MP of the time, Mr J.M. Henderson MP, had a take on it. He toured the North East in the January of 1914 speaking to meetings of constituents who were mainly opposed to the idea of state care for the elderly and infirm.

At a meeting in Culsalmond he was heckled after saying that  farmers did not seem to grasp the idea that the Insurance Act was designed to provide for those workers who having attained the age of 50 and upwards who were unable to work due to illness or disability.

“Insurance follows the servant” said Henderson and he told the heckling audiences that although he knew that a good many masters were good to there servants the facts showed that farm workers rarely stayed in one position for long. The Insurance Act was he said, designed to combat this problem by providing a fundamental right to healthcare and assistance in times of financial hardship.

Not only Culsamond but Tarland, Turriff and indeed seemingly the entire Garioch seemed to agree that the Act of Parliament was both unfair and unnecessary.

a crowd of around 1500 packed Turriff’s main square

It does seem ironic nowadays that in many cases those workers whose interests the National Insurance Act was designed to protect were often the most vehement in their opposition.

Cynics of the time suggested that the workforce was being manipulated by the land owners and bullied or perhaps being encouraged into opposition. For example a crowd of around 1500 packed Turriff’s main square on the day of the proposed sale of Mr Paterson’s cow to meet the Insurance arrears due by him.

Many were local farmers and many more were farm workers who had been given a half day holiday at a time when the Scottish Farm Servants’ Union had been unsuccessfully campaigning for regular holidays for farm workers.

The more sympathetic amongst us would perhaps understand that the spectre of state interference in rural affairs loomed large in the minds of both employers and employees.

In a court judgement of the time, Sheriff Stewart of Banff convicted and fined two farmers from Gamrie and Fordyce following representations by the defendant’s legal representatives that they had been “misguided” and “stupid” in failing to pay to stamp the National Insurance cards of their employees.

In his summing up, the good Sheriff said that if there were further examples of resistance to the act of parliament then he would seriously consider whether the penalty should not be materially increased.

The Poetry Mannie – Bob Smith has a take on it.

2 Responses to “The Turra Coo – A Monumental Myth?”