Somewhat surprisingly, the humble tea trolley is still available at a high street outlet or an online store near you, writes Duncan Harley. For readers under 25 years old this fact will perhaps mean little, but the Cambridge Dictionary Online is helpful as always and defines a tea trolley ‘as a small table on wheels, sometimes with an upper and a lower shelf, for serving drinks and food’. 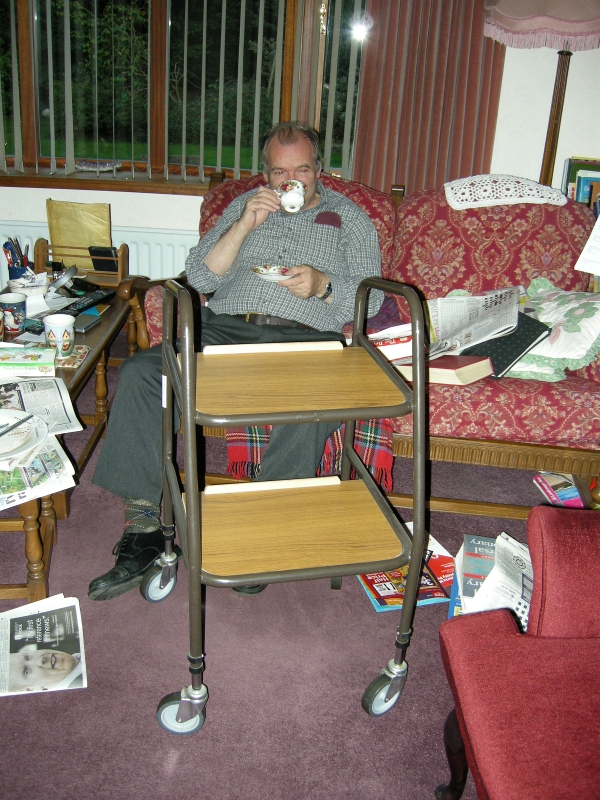 The irony of using cookies may be lost on those who have never encountered the tea trolley first hand.

Suffice it to say that no tea party was ever complete without cakes, currant buns and
indeed cherry-topped cookies gracing the lower shelf.

The US definition is seemingly ‘a tea wagon or cart’ which seems more laidback given the pinkie-raised image of the afternoon tea trolley-equipped brigade of mid-20th century Scottish middle class suburbia.

All of this, however, meant little to HG Wells. Indeed he may never have used or even seen a tea trolley.

A prolific writer and former drapery assistant, Wells penned hundreds of stories, ranging from War of the Worlds to The Time Machine, during his lifetime. Born in 1866 during the reign of Queen Victoria, many of his books are still in print and his stories remain in the popular imagination as cultural icons.

A key figure in scientific and popular fiction, Wells wrote about rockets, submarines and amazing discoveries. He gathered a readership that, in the main, could never have imagined such impossible ideas as time travel and the invasion of earth from outer space. Aliens and monsters of the deep were his currency and his readers could not get enough of the stuff!

Cremated at Golders Green Crematorium on August 16 1946, he lived just long enough to see the end of the second war to end all wars and indeed the beginnings of space travel, as Hitler’s rocket scientists were feted and recruited into the US Space Programme. This was just months after they had been working on the so called Wonder Weapons which the German military believed would turn the tide of defeat into a victory surge for the Nazi regime.

But The History of Mr Trolley must surely be Wells’s greatest and lasting literary achievement.

According to some sources, Mr Trolley is based on the author’s early experiences in the drapery trade. Alfred Trolley is a bumbling and directionless young man with an innate sense of epithet. He uses phrases like ‘dejected angelosity’ when referring to the stone carving on a cathedral and ‘the shoveacious cult’ when referring to youth.

George Orwell, in Coming Up For Air, portrays a man breaking out of the mould, just for the one day.

Wells writes about Mr Trolley in a similar vein.

Mr Trolley hates his wife, hates his shop and in general hates ‘that vast mass of useless, uneducated, and altogether pitiable people that we contemplate when we use the term, Lower Middle Class’.

The comments leave no doubt at all about Mr Trolley’s views on humanity.

The novel is perhaps a parody of Wells’s own life. Encouraged into the drapery business by a devoted father, Wells had failed academically. His numerous affairs and failed marriages are testament to his unrest.

In 1934 he wrote ‘I was never a great amorist, though I have loved several people very deeply’.

The tea trolley remains one of the great cultural icons of the 20th Century as indeed it should. Cakes and high tea are a part of the true Scottish heritage.

Mr Trolley may, of course, be an anachronism in the 21st Century.

However, it does seem somehow reassuring that Argos, Ikea and Tesco Direct still offer the aficionados of pinkie-raised taking of tea the option to use the things.

Available at £39.99 or below, and in various shades of grey, the tea trolley continues to amaze and delight those who still take tea of an afternoon.

A quick search on Google failed to return any useful results regarding how many tea trolleys are being manufactured in the UK these days, but there is little doubt that in some factory, in some god- forsaken district in China, there are lines of workers diligently assembling the ‘small table on wheels’ at the rate of dozens per hour.

As for Wells, he would have taken tea with the best of us.