Mike Shepherd examines social and economic changes which can been seen to have a wide reaching environmental impact from the rain forest of Borneo to the toads of Bishops Loch. 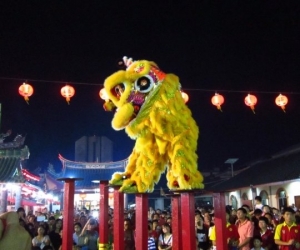 In May this year I returned from Borneo after working there for nine months.

I was living in a city slightly larger than Aberdeen, and although located in Malaysia, over half the inhabitants there are ethnic Chinese.

My hotel apartment was in the Chinese district and I found myself one of only a handful of westerners living there.

The Malaysian people pride themselves on their scrupulous racial tolerance and never at any time did I feel uncomfortable living among them.

I soon made several Chinese friends and found myself quickly immersed in their way of life. I’ve been told that the Chinese of Borneo have preserved more of their age-old culture than is the case on the Chinese mainland, where modernisation and globalisation are changing things rapidly.

I felt a lot like a modern age Marco Polo as I learnt with great interest about subjects such as Taoism, Feng Shui and numerology. My Malaysian Chinese friends were pragmatic, extremely business focussed, and yet the most superstitious people I’d ever come across.

One morning in Borneo, I woke up smelling wood smoke. I looked out from the 17th floor of the apartment block where I lived, and saw smoke billowing over the low ridges to the east of the city. Billowing smoke is a common sight in this part of the world, and is the result of scrubland being burnt off in preparation for the laying out of palm oil plantations, or land for crops.

The scrubland is what remains after tropical rain forest has been chopped down. The tropical forest is disappearing in Borneo: one estimate puts the rain forest cover at less than 50%. The tropical hard wood is sold to countries such as India, and it’s a highly profitable business.

The sight and smell of the wood smoke upset me greatly. It’s a sign of how the tropical rain forest is dwindling and it’s also a health hazard. The smoke is carcinogenic, yet none of the authorities would do anything to stop it from drifting over the city. A taxi driver told me that on occasions the smoke in the city would become so dense that it would be almost impossible to drive safely. 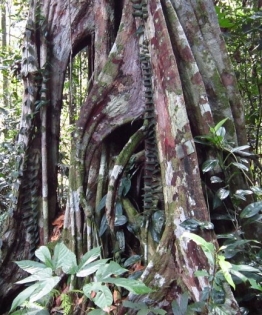 Singapore was similarly  affected in June this year.

On the day that I first smelled wood smoke, I mentioned this to my Chinese friends over a beer in the evening. I made some comment about how sad it was that we should have to tolerate the toxic smoke, in the full knowledge of the loss to humanity of such a valuable resource as the tropical rain forest.

Not only were our lungs being assaulted but the “lung” that provided oxygen to the world was being destroyed piecemeal.

The biodiversity catastrophe taking place would impoverish the whole of humanity and not just the people in Borneo.

These comments were received in stunned silence.

Then one of my friends spoke in an angry tone:

“YOU PEOPLE. How can you come here and say things like that?”

I was immediately alarmed, a subject of extreme sensitivity had clearly been broached. Not only that, the vehemence of the reply was totally out of place in a culture where there is a taboo against displaying strong emotions in public.

What followed was an explanation of what had upset them so much and I write here the gist of what they said to me.

The logging industry and palm oil plantations are major sources of employment in the area, together with the oil industry and a little bit of tourism. There is no manufacturing industry in Borneo; it’s too far off the shipping lanes to have got caught up in the tiger economy of Southeast Asia. Jobs in logging and palm oil provide income for the locals.

The alternative is the poverty that is all too visible in parts of the city. Although Malaysia is relatively prosperous, you can still find illegal shanty towns or ‘kampungs’, which are typically where immigrants from Indonesia and the Philippines live. The week after I arrived, an epidemic of cholera had broken out in a kampung in the neighbouring city; a sign of the very poor sanitary conditions in these places.

My friends had told me on other occasions about poverty in Southeast Asia. For example, the poor of Indonesia sustain themselves with what they call “second-hand rice”. This is boiled rice left over from cafes and restaurants which is treated by being left to dry in the sun. The rice is then broken up and bagged, ready to be sold very cheaply to those who can’t even afford fresh rice.

perhaps both sides of the argument are perfectly reasonable

As we sat drinking Tiger Beer in the local Chinese café, they asked me “Would you want us to be that poor by denying us jobs?” The subject was quickly changed and we found something a lot more jolly to talk about. Social harmony is highly valued in that part of the world.

In the final analysis, most people reading this in Aberdeen, I would guess, will probably agree with me; whereas most people in Borneo would take the opposing view. My take on this is that perhaps both sides of the argument are perfectly reasonable. It’s an example of how you can frame two distinct and opposing statements that are both equally valid and show impeccable internal logic.

I would still strongly concur with what I said, and yet I would also agree with my Chinese friends. I wouldn’t want them to suffer the deprivations of Asian poverty. Not them, not anybody.

How do you solve this dilemma? The region of Borneo I was working in, Sarawak, has a population of only 2.4 million. This is less than half the population of Scotland, yet Sarawak covers a large area. Perhaps it might be possible to achieve a sustainable economy that would provide work for the local population and still preserve what is left of the tropical rain forest?

Alas, this was not a topic for serious conversation in the Chinese café, it was just too naïve a suggestion to make in that part of the world. Rich and powerful people are making big money out of logging and they couldn’t care less about the environment. The mentality of exploiting any resources you can, to make money, is at any rate embedded in the local way of life at all levels, and few see any problem with that.

The threat of ever-present poverty is a big driver for this attitude.  Borneo is a simple case history that shows that without international effort to achieve a sustainable solution for the world’s environmental problems, the situation will only carry on until everything is gone.

What’s happening in Borneo is a story that is being repeated all over the tropics and elsewhere in the world. Let’s not be too smug: closer to home, it’s not too difficult to find similar examples of catastrophic loss of biodiversity. 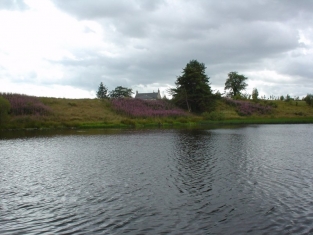 One example I know about comes from the Bishops Loch in Parkhill near Dyce. Bishops Loch is about 9 acres in area and is named after the now ruined Bishop’s Palace located on the north bank of the loch. The Palace, in reality a small house- sized building, was owned by the medieval Bishop of Aberdeen.

The loch used to be well known for its large population of toads which could be heard croaking on a summer’s evening.  However, the introduction of the oil industry inadvertently wiped out the entire toad population.

The toads would overwinter in Parkhill Wood, a behaviour that involved migrating from the loch and crossing the adjacent B997 road.

This was not that hazardous a trip in the 1960s, but when oil company offices and warehouses opened up in Dyce in the 1970s, the B997 became a much busier road. It was being used as a popular rat run to get from the Bridge of Don to Dyce. The toad population started to plummet as more and more were run over by cars during their winter migration across the road.

A local resident contacted the then Grampian Council at the end of the 1970s and asked for a tunnel to be built under the road as a means of preserving the toad population. This was not taken seriously. No doubt the council officials felt they had better things to spend ratepayers’ money on than an escape route for toads. Economics tends to win out over the environment most of the time.

The world is living an unsustainable ‘jam today, bread tomorrow’ way of life. Our current standard of living is at the expense of an indeterminate future.  Here in Scotland, our municipal authorities have a combined debt of £11 billion and it is increasing fast, year-on-year. Loading debt is the only way they can manage their budget obligations.

It will be an unwelcome legacy to our children and grandchildren, who will just have to cope with it if they can. Likewise, we are unsustainably exploiting the environment and for those of us who don’t eat second-hand rice, we are doing reasonably comfortably out of it so far.

The wild things are going fast, be it in Borneo or Bishops Loch. Academic biologists actively discuss the idea that we are currently heading for a man-made mass extinction event.

There are too many people in the world. Our planet has coped with 7 billion people on the planet so far, and the numbers are increasing fast. Four babies are being born every second: 200,000 additional people are being added to the world’s population every day.

Modern technology and transport have allowed humans to cope with these enormous numbers; they would be impossible otherwise.  As a species we are coping after a fashion, albeit with enormous stress on an environment that hasn’t quite collapsed totally, not yet anyway. However, we are on our way to eating everything that can be eaten and stripping everything else bare too.

The biodiversity catastrophe in the world today is very real and it could easily lead to human catastrophe as well. Without awareness of the issue, and concerted action, we could all share the fate of the toads in Bishops Loch.

4 Responses to “Where The Wild Things Aren’t”