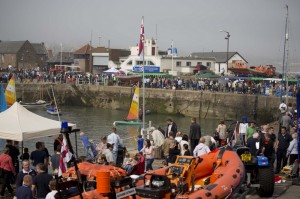 The public turn out in record numbers for the Stonehaven Harbour Festival.

Over 2000 folk attended Sunday’s Stonehaven Harbour Festival and with sunny calm seas it looked to be a record day for the festival’s organisers, reports Duncan Harley.

The Bon Accord lifeboat was present and Mackie Academy FPs Rugby Club provided entertainment and laughs as both adults and children were encouraged to chuck some very wet sponges at the players.

The Festival’s organisers were Stonehaven and District Lions Club, the Rotary Club of Stonehaven and Stonehaven Round Table. The event was supported by several local sponsors including Survival Craft Inspectorate who recently took over the harbour’s MRI building and delivered advice and practical resources.

Despite some late afternoon fog, the day was a resounding success and the organisers intend to repeat it next year.

Following the disastrous flooding in the town in the recent past, the festival was intended as a means of celebrating what Stonehaven has to offer and as a tribute to the community effort which has put the town back on to its feet.