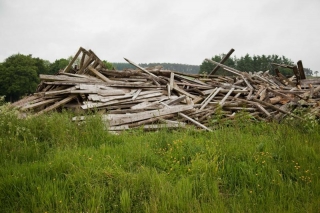 It’s not often that I am gob smacked. The two recent Iraqi wars and the invasion of Afghanistan by the so called coalition forces are in some eyes mad events, but in a strange sort of way seem understandable if you know anything much about the Great Game or Afghan history.

The resultant Twin Towers revenge attack, despite the awfulness of the event and the aftermath, were also understandable from some world perspectives. Not that I am defending the perpetrators of any these acts of course.

However the invasion of Aberdeen by IKEA is perhaps a step too far.

I have of course, recently moved house and have suffered from the complete collapse of most of my bedroom furniture during the removal.

The moving company did warn me in advance and also helpfully advised that the Nordic manufacturer’s products were unlikely to survive the moving of things. In fact they told me that the best way to re-flat pack the items was to chuck them up in the air to destroy them on landing prior to taking the wrecked items to a re-cycling centre, thus saving any potential litigation issues.

One of my removal men also claimed that IKEA is actually the manufacturer of most of the flat pack pine furniture available in B and Q and Homebase but that the multinational produces the non IKEA products to a lower specification in order to protect their market position. IKEA have unfortunately yet to respond to my questions regarding the validity of this claim.

Today a spokesperson for “Bring IKEA to Aberdeen” has told me that a new Scottish IKEA warehouse might be opening a in the shire or even a bit further north very soon. I have of course some mixed feelings about this given my recent experiences but I do understand that the brand fulfils a need at a price which many can afford. According to the pressure group:

“Plenty of people have told us they would like one further north to increase their choices as consumers, to avoid the lengthy and costly travel to the current sites in Edinburgh and Glasgow.”

Another member of “Bring IKEA to Aberdeen” said:

“We are hoping they just realise the potential of a BIG store up here, and go for it… however if smaller was the only option, we would accept that grudgingly as well… the population of Aberdeen, the shire, the highlands AND the islands is pretty high – so we hope they see that Aberdeen or the shire, is a very viable option…. the north of Scotland has been left out for FAR too long.”

I spoke to the groups local representative Jan who rightly commented that there are plenty of other “Multi’s” all over Aberdeen and the Shire, so why not IKEA? Their furniture may be cheap, she said, but it lasts. It’s quite stylish Jan told me, plus their “knick-knacks” are amazing. It would bring jobs and some furniture competition to the local market.

“Let’s get this page up and running – and then let Ikea know JUST how popular a store would be in Aberdeen, Scotland”

A spokesperson by the name of Lou told me that Job wise if you consider day and night shift, catering, cleaning crew, back of store crew, tills, management there could be a significant jobs gain for the region. “After all,” she commented “it’s not a corner shop we are talking about here.”

The “Bring IKEA to Aberdeen” is currently awaiting an announcement from the retail giant regarding the future plans of IKEA in Aberdeenshire and I wish them well. However I seem to recall a man by the name of Donald Trump promising all and delivering very little to the North East recently.

Let’s trust and hope that IKEA‘s forthcoming announcement pleases all those flat pack fans amongst us and also creates a few decently paid jobs in the process.