Oil and Glass was opened in Torry in May 2012 when it was chosen as a winning business in Aberdeen City Council’s Retail Rocks scheme. After a very successful first year, Shelagh Swanson, the studio’s owner and artist in residence, has taken on the retail unit in her own right. Included in her plans to expand the business is the development of additional studio spaces for artists. 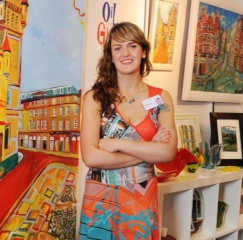 To celebrate the studio’s first birthday, Shelagh will be undertaking a marathon painting and glassmaking session from 1000 on 23 May until the same time the following day.

Other artists, working in a variety of media, will be joining Shelagh in creating work, to be sold by silent auction to raise funds for their chosen charity, Momentum Aberdeen Brain Injury Services.

The public will be able to pop in at any time during the event to watch the artists at work and follow progress.

Finished creations will initially be made available for bid via the Oil and Glass Facebook page, but the culmination will be a silent auction at the birthday party on Saturday 25 May from 1900-2200, when all the artwork made will be exhibited.

Shelagh decided to support Momentum Aberdeen Brain Injury Services when the lovely Rhian Johns, who has been helped enormously by the charity, was taken to the studio by her mum Iris to commission a painting.

Rhian’s story is featured on the studio’s webpage where there’s also a preview of a further fundraising event, Top Hats and Tiaras Grand Ball, due to take place at the Hilton Treetops on September 14.

Rhian and Iris will be joining Shelagh in the studio during part of the event and will be available for photographs.