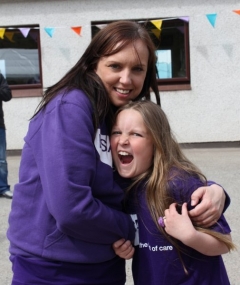 With Thanks to Claire McBain.

After welcoming almost 3,000 visitors to its spring fair at Easter Anguston Farm on Saturday 11th and Sunday 12th May, social care charity VSA raised £14,581 at an event which marked the re-opening of the farm for the summer.

This figure is significantly more than ever raised before at either their spring fairs or the charity’s VSA Days which were previously held in Duthie Park.

While the farm’s new donated pygmy goats – which can be seen on YouTube at http://ow.ly/kz3Nf  – were the highlight of the day, visitors were also kept entertained by Segway experiences, a bouncy castle, face painting and games.

VSA services also hosted stalls, spreading the word about the good they do and fundraising for their individual causes.

Staff and service users from VSA’s Arrdeir House, a long-term residential support for adults with varying degrees of mental health difficulties who would struggle to cope alone in the community, focused their efforts on fundraising for a trip of a lifetime to Disneyland.

By working in the Farm’s café on both days, the group exceeded their target and will be able to send two long-term service users on their dream holiday.

“Elspeth [Donald] and Richard [White] have been with VSA for 21 years but neither of them have been on an aeroplane, or even been out of Aberdeen.

“Of course, the most important thing about the day is the cause behind it.

“VSA is the largest charity in the north-east, an umbrella to more than 30 life-changing social care services.

“VSA supports thousands of the most vulnerable people in the community, reaching out to newborn babies, children with additional support needs, young and adult carers, adults with mental health difficulties and older people.

“The services include a nursery, school, play schemes, respite, advice, care homes, day care, respite opportunities, a bookshop and, of course, the farm.”

For the last six years the charity has taken over Duthie Park for the VSA Day, but this year the Peterculter-based farm incorporated the landmark event with its annual spring fair, raising awareness of the local work which VSA does in looking after thousands of people, and celebrating those who have supported the charity over the past year.

Easter Anguston Farm will now be open daily throughout the summer, from 10.00 a.m. until 5.00 p.m., when visitors will find all the usual attractions – the coffee shop, education centre, farm shop and garden centre – in full swing.

For more information about VSA and other events visit www.vsa.org.uk or www.youtube.com/supportvsa