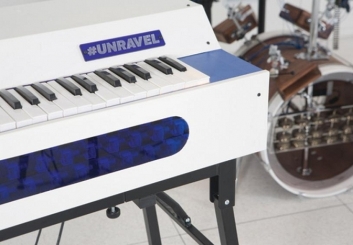 We’ve got two things to be incredibly excited about this week.

First, we have an innovative art installation entitled #Unravel utilising 7″ records, social media, acoustic instruments and storytelling, and secondly, we have a new company in residence – the wonderful physical theatre group Company of Wolves.

Both of these exciting events will combine on the 25th April when we have the opening for #Unravel starting at 5.30 p.m. in the gallery and then a sharing for the Company of Wolves production of Invisible Empire at 7.30 p.m. in the main hall.

These events are free to attend and we’d love as many of you as possible to come along.

#Unravel has been created by Edinburgh based arts-collective/experimental pop band FOUND and Glasgow musician and author Aidan Moffat.  Both artists are signed to the legendary Glasgow record label Chemikal Underground and spent a year working together on the #Unravel exhibition.

Aidan had to write 10 short stories, each sound-tracked by 160 new compositions created by FOUND.

The exhibition is controlled by 7” records which trigger acoustic instruments around the room to soundtrack the story told by the narrator on the record.  It’s not the first time FOUND have done innovative things with records – in 2011 they released a chocolate record that could be played on a record player and was completely edible.

FOUND – the members of which include Ziggy Campbell, Kev Sim, Tommy Perman and Simon Kirby – also created Cybraphon, the world’s first autonomous emotional robot band.  The music it plays changes depending on its mood which is set by mentions on social media and the internet.

The artists have carried some of this innovation into #Unravel, with the music developing depending on the time of day, what’s being said about the exhibition on the internet, the size of the audience and the local weather.

This reflects how a real narrator would change the telling of a story to suit its audience, as tales would evolve with circumstance and even memories would distort and warp depending on influence from elsewhere.

The preview is in the Gallery at 5.30 p.m. on 25th April, after which the exhibition runs from 30th April to 8th June.

Using voice and text, movement and song, Invisible Empire traces the psychological progression from conformity and alienation to extreme acts of resistance.

This performance is a live interrogation of our conflicting tendencies to conform and to rebel; to justify our actions by any means necessary; to lose ourselves in the morass of modern life; and –sometimes – to stand firm and resist.

Commenting on Invisible Empire: Work-in-Progress at the 2012 SURGE Festival 2012, theatre critic Joyce McMillan described it as:

“The atmosphere is clear, adult, humorous yet serious; and the sound is simply sensational.”

The sharing takes place in the Main Hall at 7.30 p.m. on Thursday 25th April.