On April 23 the Formartine Councillors should have had two site visits to the Menie Estate parking lot – which had been erected in a manner inconsistent with the agreed permission.  The high bunds by the Munro home Leyton Cottage should have also been examined as they were not approved.  The second of the two visits was meant to take place at approximately 9pm, and was meant to show how the lighting affects the area: the Trump organisation did not show and did not turn the lights on – for the first time in residents’ memories.  Suzanne Kelly reports. 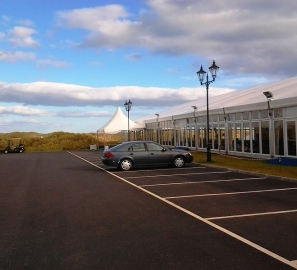 The 5.30 meeting was amazingly brief; so brief in fact I virtually missed it. Councillors attended the parking lot, and unfortunately most did not pay sufficient attention to the bund built on Leyton Farm road by the Munro’s residence.

I had written to the councillors involved to point out that the bund, not built per the approved plans, seemed to have slipped off the scope of the retrospective permission request.

These bunds block light, block view, and more importantly are blowing sand and dirt into the Munro property.

The photograph of the sign in this article shows sand built up since sandstorms earlier this month; it is at the entrance to the Munro’s driveway.

Only a few councillors had answered my email about the bunds and assured me they would look at the situation; according to residents who watched the site visit (note – no comments were taken from the public who were only permitted to observe proceedings), only a few of the councillors ventured to the other side of the high, incongruous gate separating the parking from Leyton Farm Road to actually take in the giant scale of the bund.

This bund must not be allowed to simply be described as ‘landscaping’ – a euphemism used all too often in planning applications as an unquestionable remedy for environmental upheaval and environmental damage.

For instance the planned football stadium for Loirston Loch was going to infringe on wildlife territory – two EU protected species and many coastal birds (long in decline) were to be negatively impacted, but at the time remedial screening and ‘landscaping’ was put forward as a remedy by proponents, although the actual value of such landscaping for wildlife is questionable. 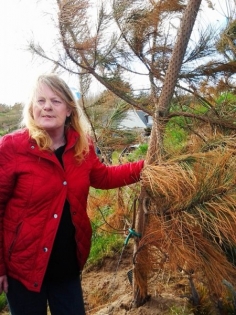 Campaigners will work to ensure that there is no successful move to treat the earth bunds as landscaping.  The golf club owners seem very keen on planting fir trees on these sandy bunds. These trees, exposed to wind, salt spray and asked to grow on sandy soil keep dying, as illustrated.  They are replaced once nearly dead, an incredible waste of living trees.

The council may simply seek to consider the bund problem solved by forcing Trump to stop planting trees on them. This will not at all solve the problem of the lack of light, view or sand/dirt blowing into the Munro property, and is no solution..

Despite many requests to the Aberdeenshire council planning and media relations offices, there is still no satisfactory explanation of crucial questions.

I had been written to by Gordon Lyon who assured me weekly site visits had been carried out at the time to ensure compliance with the approved plans.  If this level of overseeing did take place, why then were parking and bunds erected which were non-compliant?

Lyon also assured me that the temporary bunds were taken down – I had clearly described the bund by the Munro family home when I wrote.  It seems a porous parking lot surface was specified in the approved plan, which called for the layout to be sympathetic to the existing landscape.  In the event, a huge, rectangular, non-porous parking area was created.

These anomalies need to be addressed.

The temporary marquee is massive, and has metal sides with windows.  It is my understanding this structure can stay up for 28 days before it must be removed.  It went up approximately 6 days before this meeting took place.  Residents will monitor the situation.

A large party is scheduled for the marquee over this coming weekend; it seems that residents and wildlife will have to get used to such gatherings. Normal legislation permits noise up until 11pm at night, after which sound levels are to be kept low.  We will see how this is respected.

However, the most sensational part of the evening was a  non-event.

The ‘twilight’ visit was tentatively scheduled for 9pm.  I had been with the residents from 5.30 until this start time; we arrived from a resident’s home at 8:50pm. We knew the meeting might start late, as councillors first had to attend a meeting at Blackdog concerning controversial wind farm plans. 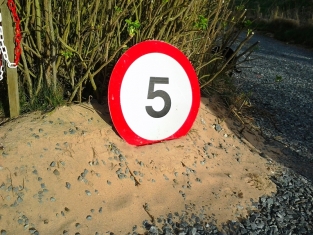 We waited.  No lights came on.  The full moon – which would have made determining the lighting’s effect and light spill very difficult anyway – was the only light.

Residents and supporters present commented that the lights had virtually always come on once it got dark. But not this evening.

At approximately 09:50 the first cars arrived  in the parking area.  Councillors assembled.  The lot remained dark.

One window in the clubhouse had light shining from it; I volunteered to walk down and see if anyone was in, but there was no answer at the locked door.

The councillors and onlookers waited.  Ms Malone, who had attended the 5.30 meeting never showed up.  Security, usually an all-pervading presence at the estate and  who are known to jump out in front of people at night were likewise nowhere to be seen.

Suffice it to say that even councillors sympathetic to the Trump organisation were not best pleased, and approximately 15 minutes later they announced they would be leaving, unable to see the effects of the lights.  The lights stand on extremely high posts, one of which is near the Munro cottage.

With no lights on, it was clear that nocturnal wildlife is in the area.  Bats, protected by EU environmental regulations were very much in evidence, as was an owl or two.  It was  brought up in discussion with residents that two modern buildings which replaced traditional steading buildings near the top of Leyton Farm road used to have bats roosting.

The new structures, again erected apparently without planning permission, are of a metal construction, and are not conducive to bats roosting.  How wildlife which may have roosted in the old buildings was dealt with when the new buildings were erected should be looked into by environmental council officers.

The steadings should likewise be scrutinised, and if planning permission was needed (as an expert in traditional buildings tells me is the case), then action should be taken.

Councillors were not making comments to the observers, but it was plain to see that no one was happy to have wasted their time.  Whether or not this disregard for a scheduled planning assessment visit will go against the Trump organisation in future will be watched closely.

For now, the bunds remain at the Munro property, light spill remains unmeasured.  But for the Trump organisation, everything is just fine.

3 Responses to “Kept In The Dark: Trump Snubs Council”