Last  week marked the 242nd anniversary of the Paris Commune of 1871. The Commune was one of the most important examples in history of people taking control of their own lives and reorganising their society. In the second part of Simon Gall’s two-part analysis of the Commune through the eyes of some important progressive scholars, we examine its destruction by the French government in May 1871, but learn how its legacy lives on and how it has influenced and inspired the generations since. 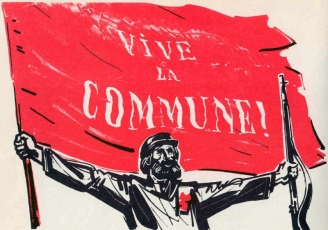 The Downfall of the Commune

They were “cut to pieces” and “shot down in hundreds by mitrailleuse fire”.

There were random street executions and accounts of people being buried alive after the firing squads had failed to do their jobs properly.

Marx wrote, “Even the atrocities of the bourgeois in June, 1848, vanish before the ineffable infamy of 1871” and continued, “the great problem…(was) how to get rid of the heaps of corpses…after the battle was over. About 30,000 Parisians were shot down by the bestial soldiery, and about 45,000 were arrested, many of whom were afterwards executed, while thousands were transported or exiled.”

Opinions on the Commune

The Communards were endlessly praised by socialist writers the world over for their determination and bravery in attempting to bring about a new society, but many also offered their own analysis of what went wrong. All realised that the cards were stacked against the Commune from the beginning.

Indeed the situation led Peter Kropotkin to write, “The Commune of 1871 could be nothing but a first attempt. Beginning at the close of a great war, hemmed in between two armies ready to join hands and crush the people.” Nevertheless, scholars gave their opinions on the movement.

Peter Kropotkin was both heartened and disheartened by the Commune.

He saw traces of Anarchism in its governance, “By proclaiming the free Commune, the people of Paris proclaimed an essential anarchist principle, which was the breakdown of the State” and recognised its historical importance when he stated that with the movement of the “Commune of Paris a new idea was born”, and that it was “to become the starting point for future revolutions.”

In the months following the fall of the Commune, the luxury of hindsight meant that he was able to ponder calmly what he felt went wrong.

The first problem he noted was, “It neither boldly declared itself socialist nor proceeded to the expropriation of capital nor the organisation of labour. It did not even take stock of the general resources of the city….nor did it break with (in practice) the tradition of the State, of representative government…..they let themselves get carried away by the fetish worship of governments and set one up of their own.”

He felt that this led to elected representatives falling out of touch with the electorate. He proposed that they had lost the “inspiration which only comes from continual contact with the masses” and had become “paralyzed by their separation from the people” and that “they themselves (had) paralyzed the popular initiative.”

In 1892, he continued his observations on the Commune, noting that the hunger that plagued Paris had been instrumental in the downfall of the revolution, the “Commune perished for lack of combatants. It had taken for the separation of Church and State, but it neglected, alas, until too late, to take measures for providing the people with bread.”

Mikhail Bakunin joyously claimed that, “Revolutionary Socialism (Anarchism) has just attempted its first striking and practical demonstration in the Paris Commune.” He felt that the Commune went some way towards realising the vision of a stateless society. Federated Communes, delegates bound by the imperative mandate, and the concept of instant recall were concepts which Bakunin had been discussing since around 1848.

He continued, “I am a supporter (of the Commune), above all, because of it was a bold, clearly formulated negation of the State.”

Whilst being careful to never lay blame at any Communard door he observed, “The proletariat of the great cities of France, and even of Paris, still cling to many Jacobin (radical bourgeois) prejudices, and to many dictatorial and governmental concepts. The cult of authority – the fatal result of religious education, that historic source of all evils, deprivations, and servitude – has not yet been completely eradicated in them.”

To him, the influence of the Jacobins “was the great misfortune for the Commune” because “they were paralyzed, and they paralyzed the Commune….they lacked the time and even the capacity to overcome and subdue many of their own bourgeois prejudices which were contrary to their newly acquired socialism.”

Karl Marx wrote one of the most comprehensive accounts of the Paris Commune, praising the revolution with the best of words, “Working mens’ Paris, with its Commune, will be forever celebrated as the glorious harbinger of a new society. Its martyrs are enshrined in the great heart of the working class. Its exterminators’ history has already nailed to that eternal pillory from which all the prayers of their priest will not avail to redeem them.”

He was immensely proud of what the Commune had achieved, despite being unconvinced about it at its inception. When he heard of the plan to overthrow the Government, he called the plan “a folly of despair.”

He changed his tune and began watching in awe as the proletariat of Paris took the reins. The movement had such a profound effect on their thinking that in 1872 he and Friedrich Engels edited the Communist Manifesto stating that, it was, in places out of date and declared “that the working class cannot simply lay hold of the ready-made state machinery and wield it for its own purposes.”

Later, Marx would call the Commune “the political form at last discovered under which to work out the economic emancipation of labour.” After Marx’s death in 1883, Engels wrote in March 1891, “Look at the Paris Commune.That was the Dictatorship of the Proletariat” using the Commune to prove their thinking.

In a letter to Dr. Kugelmann, Marx pointed to two mistakes the Communards made.

The first was that “They did not want to start the Civil War”. This point was pondered by Lenin years later. He felt that the Communards should have marched on Versailles because “launching a resolute offensive against Versailles would have crowned its victory in Paris”. He wrote that the hesitation “gave the Versailles Government time to gather dark forces and prepare for the blood-soaked week of May.”

Lenin too paid tribute to the people of the Commune.

He wrote that the events and their actions were “unprecedented in history. Up to that time power had, as a rule, been in the hands of landowners and capitalists, ie the hands of their trusted agents who made up the so-called government.” He noted its importance as a grassroots movement by stating that “no one consciously prepared it in an organised way.”

He felt that the Commune aimed to achieve something very important – anti-parliamentarianism. It was to be “a working body” that sought to combine the work of the executive and legislative branches of government into one.

However, he criticised the Commune for not “expropriating the expropriators”. He noted that large organisations, such as the Bank of France had not been targeted. The Communards could have made use of the capital. Also, he wrote that there was “no workers’ party, the working class had not gone through a long school of struggle and was unprepared.”

Despite his criticisms, Lenin diligently noted that “the chief thing which the Commune lacked was time – an opportunity to take stock of the situation and to embark upon the fulfilment of its programme…The Commune had to concentrate primarily on self-defence…it had no time to think seriously of anything else.”

It is still the subject of much analysis and discussion in academia and among activists and trade unionists around the world. It has been examined on numerous occasions by the arts.  La Commune Film is one example.

It has inspired and continues to inspire people in search of alternative ways of living.

M Bakunin        The Paris Commune and the Idea of the State

F Engels          Introduction to The Civil War in France

P Kropotkin      The Conquest of Bread

P Kropotkin      The Commune of Paris