When Donald Trump bought the Menie Estate, it was the end of a peaceful life in the countryside for the existing residents. Anthony Baxter captured incidents in his award-winning documentary You’ve Been Trumped which caused outcry here and abroad. In Part 3 of a series on the Menie Estate, Suzanne Kelly finds out how life is now for Trump’s next-door neighbours. 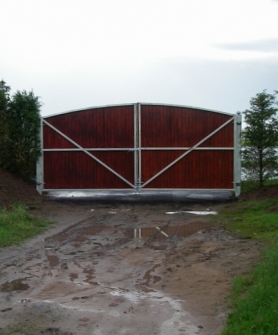 There are certain absolute rights UK citizens are supposed to enjoy, including the right to privacy and a right to go about their lawful business without interference. In Scotland, access to the countryside – whoever owns it – is guaranteed by the Land Reform (Scotland) Act 2003.

There are special provisions for golf courses; walkers must not interfere with play, keep dogs on a lead and so on.

Here is a paragraph from a brochure entitled Enjoy Scotland’s Outdoors published by Scottish Natural Heritage:

“Respect the interests of others.

“Respect the needs of other people enjoying or working in the outdoors and follow any reasonable advice from land managers. Respect people’s privacy and peace of mind. Avoid causing alarm to people, especially at night, by keeping a reasonable distance from houses and gardens or by using paths or tracks.”

So much for the theory; here is the reality in Balmedie.

“Eventually, after about 20 minutes, I was speaking to a chap named Eric over the phone. He eventually agreed I could walk along this track. I was wanting to go along and visit Mike and Sheila [Forbes].

“The security guard denied there were any houses. I said, ‘Yes, there are; you must drive past them several times a day’. Eric eventually agreed I could walk, but I would have to be followed by the security guard in his truck.”

In one resident’s words:

“Friends were harassed by a greens keeper… walking down the track… one of the greens keeping staff saw them, approached them and apparently he was absolutely ballistic – they thought he was going to have a heart attack. ‘If you take one step off that path, you are breaking the law,’ he was saying.”

Another resident nods in agreement, telling me that they have heard variations of that story. Alicia Bruce has had a similarly aggressive run-in; details can be found at http://www.aliciabruce.co.uk/news/trump-security-duckrabbit-the-daily-mail/  . Alicia was threatened, and called the police.  In this instance, the police cautioned the Trump security people. 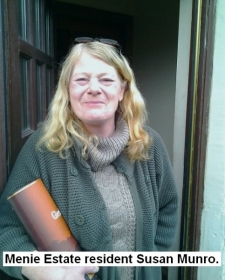 Susan Munro is watched by security with some frequency when driving, and even when she is on her property. She has been a Menie Estate resident for over 30 years and as such should be well-known to security, as should the cars her family owns.

Nevertheless, she is often stopped by security, interrogated and identification demanded of her. This can be to the extent that when she returns from work late at night, men on foot will jump in front of her car from out of nowhere, and then demand ID. As she succinctly put it:

“I finished work last night and was stopped by security. It’s horrible when they jump out at you in the pitch black. They alarmed me. I am sick fed up with security hassling me.”

Susan has to use the Trump road at present as her own access road is, at the time of writing, completely out of use (see article 2 in this series – The Road’s A Ruin).

It must sit badly to have your own road in a state, and be accosted when using the only road available, one which is completely smooth and perfectly finished. However, that is not the end of Susan’s woes. They will be addressed shortly.

There are more such anecdotes, old and new. It is worth mentioning that some residents report run-ins with friendly security. While the ‘friendly’ security guards may not be unpleasant, what they are doing questioning the people who live on this estate is a mystery.

No one who has seen You’ve Been Trumped can forget the scene in which Baxter and Phinney are arrested for an alleged breach of the peace. They had filmed themselves visiting the estate manager’s office to ask when residents could expect their water supply to be restored.

They are unceremoniously dismissed (the estate personnel even makes an odd comment about the value of their equipment, which can be seen as a veiled threat). The film documents the arrest of two well-behaved journalists on the hearsay evidence of a billionaire’s employee.

We condemn such abuses of power in the third world, but it’s happened here in Scotland with absolutely no proper subsequent independent investigation. (More details can be found at https://aberdeenvoice.com/2012/10/bully-for-you-trump-threatens-suit-against-filmmaker/ 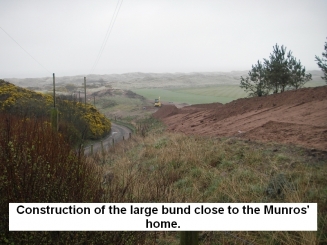 On top of years of intimidation and questionable tactics, at least one security firm previously employed (there have been at least two) used guards armed with pellet/air guns.

These guards would engage in target practice. One witness also saw a guard and a man with a rifle.

So we have residents constantly being stopped, harassed, and ‘jumped out at’ by ill-tempered and aggressive guards – some of whom used to have air guns.

It is almost as if the Trump organisation and its security firms use the SNH outdoor access policy as a laundry list of ways to bully.

The residents and I believe Trump’s security guards have acted in the above situations well beyond their legal authority. We also believe that security operatives are meant to display badges prominently. The residents confirm they have hardly ever seen any such badges; and none of us recall seeing any in the film You’ve Been Trumped either.

The security firm currently operating is Izon. A sign bearing their name appears at a locked gate which prevents cars from entering, which seems in contravention of free access laws. Anyone on foot, on bicycle or even on horseback should be able to access this (or any other) road.

Izon has been asked to comment on these issues and whether its operatives carry air/pellet/other types of guns. The company’s response will be reported in due course. 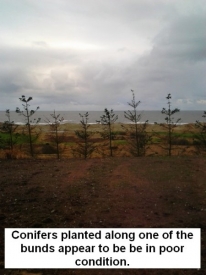 Visiting these people, living as they do with all sorts of imposed and unnecessary hardships, hits me hardest when we go to Susan Munro’s house. Walking down the damaged road (see Menie Series Pt 2) was bad enough.

But as we walk down towards the Munro house, a bund – an artificial, steep, and very high earthwork rises alongside the road, blocking out any views of the sea and landscape the Munros previously enjoyed.

The Trump Organisation has also used a similar tactic at the Milne property. Trump’s landscapers have attempted to put a row of conifers along the property boundary. If they were to grow, then Milne’s view of the sea would be gone. As it is, the trees are unable to grow in sand.

“Your first clue that they won’t grow is that there aren’t already any here,” is how David Milne puts it.

It is as if ‘The Donald’ thought he could stop the tides as well as make trees grow in sand.

Life goes on for the residents. At the time of writing it is understood the damaged roads are to be repaired. Aberdeen Voice will report when the ‘temporary’ bunds come down and when security stops accosting residents and visitors. I am just not sure when that will be.

9 Responses to “Menie Estate No. 3: Love Thy Neighbour Trump Style”