Peering out over the High Street’s rimed cobbles from ‘neath their frosted brows, one might easily mistake these spectral figures as characters from some long-forgotten Victorian melodrama. But no, this is Old Aberdeen. They are, in fact, local Dickens enthusiasts, gathering for the last time in the great man’s Bicentennial Year. David Innes reports. 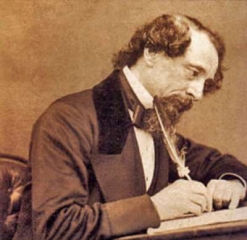 “No fog, no mist, clear bright, jovial stirring cold” is how Dickens described Christmas Day in A Christmas Carol.

He might have been describing conditions in Aberdeen on Thursday 6 December, but while the wintry weather was without doubt a factor in keeping numbers low, those who braved the temperatures and icy underfoot conditions to attend the event at the new university library enjoyed a one-off treat.

The university is proud to possess one of the best Dickens collections in the world and it was a privilege to be present when the first editions of all his works were laid out for examination and enjoyment.

With special thanks to Keith O’ Sullivan, the University of Aberdeen’s Senior Rare Books Librarian. Thank you, Keith.

Particularly worthy of mention are the two first editions of Oliver Twist (1838). Until publication of this novel in its constituent parts, Dickens had used the pen name ‘Boz’. He had decided, however, that his own identity be used when the book was published in collected form.

The first edition was published by George Bentley before Dickens’ wish could be granted. It was only delayed by a week, as the Boz edition sold out and the imprint with the author’s own identity was offered for sale.

The entire Sketches by Boz series is also part of the University’s collection. It was surprising to see that each part was priced at one shilling (5 pence), expensive for the times.

Theatre posters of interest and lesser-known works were also displayed, each adding to the overall picture of the hugely-talented man still loved by millions, two hundred years after his birth.

Due to the low numbers, formal business was suspended for the evening but dates of future meetings, based around discussion of specific writings from the great man’s output, were agreed. Everyone on the mailing list will be contacted in advance of these meetings, the first of which is scheduled to be held on 21 February 2013.

If you wish to be added to Dr Paul Schlicke’s e-mail circular, drop him an e-mail p.schlicke@abdn.ac.uk